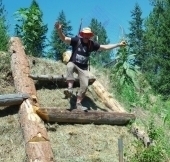 SEPP to Boot: Stephen's Experience (BRK)
Is the new batch box that's in the workshop itself not performing as expected, that you still prefer to fire up the original batch box in the classroom?
show more
1 week ago
wheaton laboratories 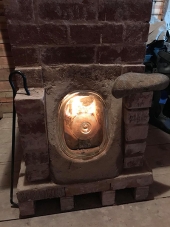 Casserole Door - an innovative door for batch box rocket mass heaters
Some have had no problems and others see them break fairly often. It could be due to the material/brand or those who see breaks might be touching the hot glass with a cold and wet glove which causes thermal shock. As you can find lids used for $5 or less, I would give it a try and see.
show more
1 week ago
rocket mass heaters

Grey's Bootcamp Journal
The rock and pebble only mass isn't nearly as efficient at storing and releasing heat compared to cob due to all the air within the mass, but this iteration uses that to protect the nearby wood. We put 2 inches of pea gravel at the bottom and the sides as an insulating layer, and used cob with fist sized rocks throughout the middle. We tried to avoid any air from pebbles only in the center as that reduces heat transfer and storage. If you don't need to take it apart, gravel is a distant #2 compared to a solid mass.
show more
2 weeks ago
wheaton laboratories

Caleb's Bootcamp Experience (BRK)
I came across one or two slugs in wood as well up there, certainly was a practice range back in the day!
show more
2 weeks ago
wheaton laboratories
Trees Kinda Suck...
Sorry I'm not sure how to embed a video hosted on Facebook, but this goes into the how and why of trees pulling water out of the ground at negatives pressures which normally cause water to boil due to the vacuum:

Where are all the NFT permies? I need your help.

John Wolfram wrote:I generally stay away from everything crypto at least for the reasons stated below.

...
Global electricity generation for the crypto-assets ...

On a nice plus-side, Ethereum recently changed the way miners process these, and shifted away from a very energy-intensive method that relied on powerful video cards. As a result the video card market has started dropping from insanely high prices and ever-greater energy consumption. I had read about a coal powered power plant that was put online in another country just to provide power for miners in that region, so fingers crossed that trend has peaked and will come back down now.

I apologize if anything in my previous post made anyone uncomfortable.
show more
4 weeks ago
crowdfunding

Where are all the NFT permies? I need your help.
I had a coworker who bought an NFT which was a usable digital character in a game, and as he played a game and earned experience/currency that could be used to upgrade the character and make it more powerful/valuable. Assuming someone else wants to buy it to play later.

The #1 function of NFTs that I've read is as a tool for money laundering. I pay you $50M in illegal funds (typically using a crypto wallet) for a worthless digital widgit, and then you pay me $50M back for a different worthless doodad, and now the paper trail to a legit financial asset has begun. But who knows, maybe NFTs will evolve to become something useful down the road.

NFTs could still be made as a fun piece of art with no real intended value, the same way some backers are getting their images added to the video.
show more
4 weeks ago
crowdfunding

Mike Haasl wrote:The anticipation is killing me...  What's going to happen tomorrow???  T+1?  Is that even a thing?

I believe Dez will officially hit the 2 year mark in bootcamp and will be getting his Ant Village acre rent-free for life, and will be transitioning to living/building on the lab.
show more
2 months ago
wheaton laboratories

HEX token
While I appreciate the sharing of charts, using the log scaling for one and linear for the other feels visually deceptive. In September 2021 HEX peaked then money started leaving HEX which is currently down over 92%; and went into Bitcoin which peaked in October, but bitcoin is now down over 72%; then money moved into Ethereum which peaked in November and is now down over 68%. I checked a few others which were also down around 60-65%. So HEX was hit a lot harder which some will read as either "a great time to buy more" or as proof that it was a pump and dump scheme.

The 'great time to buy' chant makes me laugh, as it was a great time to buy when it dropped from $0.45 to .30, then at .20, then at .15, then at .10, then at .05... Maybe now that it's been stable at around .03-.05 for a while a person could convince themself to buy more. But as mentioned before all crypto currency depends on taking money from others if you ever plan for it to be worth more than you paid for it, very much like a pyramid or ponzi scheme. Since the money isn't backing something of actual value the way say a stock does for a company, the only way to make money is buy taking it from others.

Edit: what is that HEX X chart supposed to be showing?
show more
3 months ago
financial strategy