What I Want in The End: My Perspective on Life Based on Death

Borislav Iliev wrote:Great thread!
I think everyone has a philosophy of some sort, it is based on what you know about reality, the logic that connects everything and the ethics that follows, choosing what is the right thing to do.

The first two parts determine what you believe in, and the last depends also on your capacity to have the strength to follow the right path.

As long as I can remeber I have deep curiosity toward reality and the questions of meaning and purpose were alway with me.

Somehow I was not satisfied with the notion that these most important questions in life have no objectively true answer.
It is somehow complicated to put in words what exactly I believe in.
First I know death will be the end of the existence of my consciousness, I accept the given opportunity for existence as something sacred and very precious. I try to find myself as a tiny part of the puzzle of life in general, and I try to be worthy enough for the given opportunity.
I try to understand nature, and I think finding my place in it and being a positive element in it is the most real thing there is.

I kind of have a harsh view about the truth of my existence given the fact I have tried to eradicate any wishful thinking I possess.
I accept myself as just the random experiment nature is conducting in order to find something that works. I have no other choice but to give the best I can in that test life is.

Not long ago i have stumbled across the philosophy of stoicism which really make a great sense to me and I try to follow it. It really can help you finding your inner strenght, dignity and developing every positive human quality there is.
It has that notion "living according to nature", which means you need to make use of your most fine qualities nature provided you with - reason, intelligence, temperance etc.
It has bunch of great stuff in it, the only downside being it doesnt provide you with the answer what exactly is the goal in which you need to make use of your potential.

Using logic I never managed to find something more important than existence itself, everything life is and all qualities and characteristics of life leads to existence itself.
So the objective goal of life is the fight for a stable and secure existence, here comes the connection with permaculture and how I found it. I was searching for soil fertility, what that is, and how it works. Building society around perennial plants and having respect for the cycle of nutrients is a very big part of the meaning a human life can have, also science is another important element.

Living your life trying to develop any part of the puzzle which build a more stable existence for the future generations(it is all that will continue to exist and what matters) is a life worth living, it is how you pay for the great gift your own existence is. Having the strength to follow the right path is what will make you feel good about yourself and will give you the sense of worth.

I am not sure how good I managed to explain what I believe in, but without that type of reason I will be totally lost, and will waste all nature gave me.

Borislav, you haven't posted in a year. I hope you're well and that you'll be back posting sometime soon. I just stumbled on a few of your posts and really appreciate your style and philosophy. Take care.
show more
45 minutes ago
meaningless drivel

Simplicity is beautiful freedom. Who will free us?
deletified

Simplicity is beautiful freedom. Who will free us?
delete-o
show more
10 hours ago
politics
Living to live not to work.your thoughts.

Judith Browning wrote:This is a difficult one...
In my early twenties I hung on to the idea that I could go and live outside the economy.
Cabin in the woods, a mule, nuts and berries and grow everything else.

Judith, I really enjoyed reading your story. I find myself really curious to hear the back-stories of other Permies lately. It seems to provide so much more depth to the present tense nature of the forum, which can feel at times like a fast-moving blur of activity.
show more
11 hours ago
ethics and philosophy
Finally a vole eating predator makes a serious impact in my garden!
Kestrel nesting box plans

A few of these are now on my to-do list. Thank you Dc Stewart for the idea.
show more
1 day ago
nibblers
Finally a vole eating predator makes a serious impact in my garden!

Dc Stewart wrote:Our previous property developed a serious vole infestation until a kestrel (AKA "weapons of mouse destruction") showed up with a mate and started a family. A year later, there were kestrels on continuous sentry duty atop the trees and the vole population withered away. We helped out by keeping weeds and grass mowed short in the garden area to deny surface cover. Afterwards, the hornets decided that the abandoned vole mounds were ideal places to construct ground nests, but that's a different story.

That's encouraging. My neighbour has seen them at his place. I need to figure out a way to invite them to our land. Thank you for this.
show more
1 day ago
nibblers 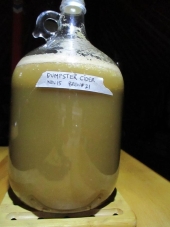 Favorite fruit to make wine with?

Dan Fish wrote:I haven't done it in a while but my favorite is applejack. I used to make a simple apple wine that was then left out to freeze multiple nights while the ice is removed daily making for a more potent beverage. In Alaska where I first learned to make it that stuff would get STRONG. Here, not as much.


It's pretty hard to measure the resulting alcohol volume, but you can calculate the maximum. We've jacked cider that was 15% and gotten it to 51% maximum, but it required cold nights dipping to near -40deg.. It's still surprisingly smooth considering the strength.

We tried brewing cider with added "candied sugar" that was VERY dark. After we jacked it, it felt only right to call it Black Jack.
show more
1 day ago
fermentation

Sepp Holzer on moles and voles

Victor Johanson wrote:I'm about to find out if the voles will be problematic here...I've never hindered them, and when I built a hugelbed three years ago, they proceeded to turn it into a giant vole condo. Now I see them running all over the place. I thought maybe last winter they would do some damage, but all I found were a few nibbles. This summer they ate on a few spuds and carrots and felled some grain stalks, but not enough to cause alarm. They were everywhere, so I think this winter will be a good test. Up here people think I'm nuts to tolerate them, but I hate to go on a killing jag until I know I have a problem, and so far I don't. I also think the aeration they introduce may help warm our cold soil. My theory is that the reason most people have problems with them in their orchards here is that there is nothing but fruit trees and some grass. What else are they supposed to eat? I'm in the midst of my "plant everything everywhere" campaign, so there are all kinds of vole comestibles available. I know a guy who spreads sunflower seeds to lure them away from his plants. The main problem here isn't with them eating the roots in winter, because the entire root zone is frozen solid, so instead they end up girdling trunks. I lost a Nanking cherry that way, and one apple tree was girdled except for a tiny isthmus of bark. It survived, although it took a long tome to recover, and is still more of a bush than a tree ten years later. I finally got one apple from it a couple years ago. But anyway, now I have plenty more selection, so I'm hoping it will enable the voles to remain part of the system without destroying its main function of providing me with what I want.

I love your philosophy. I also unwittingly created a vole hotel in one of our hugelbeds. It was a late season project and corners were cut in order to get it completed. I think I didn't pack enough soil in between logs and left enough voids for them to get established in there. Most of my problem trees and shrubs are in that one hugelbed, so I'm guessing the roots are getting ravaged.
show more
1 day ago
nibblers

Sepp Holzer on moles and voles

Susan Monroe wrote:I've got a rodent dog that I can lend/give you.  She's pretty tenacious.  And she doesn't eat them, apparently, just leaves the bodies lying around for you to keep score.

But there is that problem with the holes, though...  I've suggested that she fill them in when she's finished, but all she does is look up at me, wag her tail, and say, "What?"

I watched one of our golden retrievers digging in the snow with obvious determination. She would dig, dig, dig--then listen. Dig, dig, dig-- listen, until she was in the hole about 18" deep. Then, she popped out with a vole hanging out of her mouth. I think she was as surprised as I was. She didn't kill it though, she just wanted to know who was down there.
show more
1 day ago
nibblers