Brick garden structures without concrete footing: am I crazy?
Every “intro to raised beds” article mentions that they can be made of many materials, including brick, but there’s not much online about how to actually build them. Every tutorial I’ve found starts with “pour a 12” concrete footer.” I don’t want to pour concrete into my garden, I just want a durable raised bed that matches the brick work in my house! I live in a mild temperate climate with an official frost depth of 12”.

Would it work to build a foot-high brick wall over a footing of gravel? Or should I give up and accept replacing my garden beds every 4 years?
show more
2 years ago
stone work

Tegan's Bad Idea Garden
So I have a nice garden in my front yard. We built wooden boxes for our raised beds, we bought three yards of fancy gardening soil and had it delivered, and we only buried wood in half of the beds. In the non-boxed planting areas, we carefully dug in compost and lime. I live in an affluent, urban neighborhood and we get compliments from the neighbors on our garden. In our first season last year we got lots of raspberries, pounds of cherry tomatoes, the usual excess of zucchini, and eight nice, big butternut squash. My housemate and I share the planning and work on this garden, and it cost us at least $500.

This is not the garden I want to talk about. I have a terraced back yard, two tiers, and the one farther away from the house is pretty useless. It has alley access, but the alley is so narrow that I can't get anyone to deliver gardening materials directly there. The sun isn't great, because our neighbors to the south are upslope and have their own yard completely fenced off, so there's a 10'+ wall to the south. On the other side of the alley to the east are huge bigleaf maple trees. My yard is separated from the north neighbor by two large spruce trees. And the terrace to the west is stabilized by a rock wall topped with a 6' hedge. On top of all this, we have very heavy clay soil that's a pain to dig and has roots from the spruce trees running through the whole thing.

But I want to grow stuff there. And I don't want to spend years growing cover crops first.

I had a big pile of composted manure left over from the front garden, which I carried by hand down the path to the back of the house ("around the block" is actually about five blocks long, we're missing streets because of the steepness of the hill). And I got a big pile of wood chips delivered for free from an arborist. This is something Paul says not to do. Persistent herbicides and all that. That's why this is the bad idea garden. I also got a bunch of conifer branches from my neighbor's arborist -- He dropped them in my lawn on his way to load them up and I told him to leave them. They're piled with some chunks of wood under one section of the woodchips.
show more
4 years ago
projects
Color coding plants
I grew a greens mix last year and had a hard time telling what some of the plants were and when to harvest them, so I think it's a great idea to choose varieties that look different for planting together! Red lettuce doesn't look like anything else that comes up in my garden so it's easy to identify. Carrots are also good if you don't want to mistake your plants for a weed. I think I may have accidentally pulled up some radishes this fall when I was cleaning up because they look so much like other random green things that like to grow in my garden and are not delicious.
show more
4 years ago
gardening for beginners
Preserving slicing tomatoes
I don't bother growing paste tomatoes since I'm not in a great tomato climate (Seattle). But sometimes we plan badly and there's a huge glut of cherry tomatoes or heirloom slicing tomatoes in the fall. Last year I bought a bunch of heirloom seconds from a farm and managed to make some preserves that were totally edible, but kind of watery. What else can we do with the extras when they're not the right variety for canning or making sauce?
show more
4 years ago
food preservation
Shade tolerant plants for a forest Garden in Zone 8?
I saw a 6' tall tree kale plant growing here in zone 8b. Artichoke/cardoon are also good. When you grow your own artichokes you can harvest them earlier than they usually are in the US so that more of the flower is edible.
show more
4 years ago
forest garden

is anyone using mainly natives (american, region specific, etc) as their main crops?
Before European settlement, the people in my area were hunters, fishers, and foragers. Although I'm sure they fostered the foods they liked in the landscape, they did not practice gardening as we think of it. As far as I know, plant foods came from two major areas: berries and roots. None of the roots are now cultivated for food. So if I was going to do something like this in my area, I'd either go the direction of planting/harvesting native berries (some of which have the advantage of being popular urban landscaping plants already) or attempting to cultivate and breed camas and wapato as food crops.

I foraged about a gallon of blackberries from my urban neighborhood this summer, and I could probably get a lot more if I put in more hours and went for salal berries as well. I think what's best for you will come down to what you can research about your local history and climate. Bramble berries and the blueberry family grow wonderfully with basically no care in my climate, compared to a lot of fruit trees which are high maintenance and disease prone. And these days we have the technology to preserve delicate berries through canning and freezing. Your native food sources probably also naturally grow well where you are and a little bit of tending will make them very productive.
show more
4 years ago
woodland 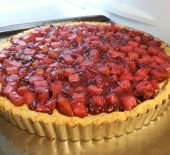 gonna be in the seattle area this saturday
Thanks so much to Annalisa for hosting and Paul and Jocelyn for being up for meeting random people! I'm a lot more educated about wood chips now. I may still end up rolling the dice on moving some organic material into my garden, but I'll do that knowing the risks and trade offs. Just today I intercepted a landscaper who'd thrown a bunch of branches he trimmed from the next door neighbor's yard over into mine where he could get his truck up next to it, and told him to leave them. I don't know what may have been sprayed there years ago, but I don't know about my property either (all I know is I have a yard that is 50% dandelions).
show more
4 years ago
cascadia 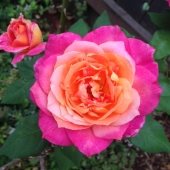 Roses and permaculture?
Those look like hybrid tea roses. I inherited two bushes with my house and I don't do anything to care for them other than pruning in the winter. They don't produce usable hips, but if the flowers smell good you can dry the petals and use them in all kinds of ways. The fresh petals are edible in salads, and the dried ones can be used to make syrup or added to jams and preserves. I'd only remove ones that look unhealthy.
show more
4 years ago
plants
Is there a definitive guide for laws, regulations, and general guidance for homesteading in the PNW?


a manageable commute to a job if savings aren't high enough is a big kicker.


For you and everyone else! By far the biggest factor in land prices in WA is whether you're commuting distance from a major urban area. You're probably going to have to decide if you need that safety net, which means putting out more money for the land and therefore being more likely to need the job. Catch-22.
show more
4 years ago
cascadia
Newbie, balcony garden, how to start?
I'd look for the book "Permaculture in Pots," which seems perfect for your situation. The author is from the UK so the climate is a bit different, but it should have some advice specifically for container gardening which has very different issues from gardening in the ground.
show more
4 years ago
urban