The Sock-o a Sock-o Darn Tough vs. Smartwool vs. Icebreaker Thread
Hello!

One Darn Tough sock has sprung a loose thread (up at the cuff) and the two others pairs are looking a little fuzzy, however, they all remain fully functional and still very cushy.
show more
2 weeks ago
gear

Anyone here write?
Thank you for sharing! I also belong to a group which hands out prompts for each meeting - this morning I rough drafted a response to: If it rained food, what would you want the forecast to look like?

I hope, after the next couple of drafts it will require, to have a comedic story about dealing with food waste in either a middle-grade or young-adult fantasy setting. (The main character can literally ask for any food and it magically rains down - but then she discovers that she's not creating new food, but taking it from other people's plates and fridges... and eventually decides to only ask for food that otherwise would be tossed.)
show more
1 month ago
writing 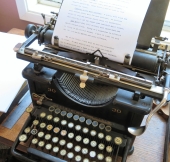 typewriter - using, fixing, and restoring old typewriters
I gave up my typewriter at Christmas. I wasn't using it as much as I felt it should be and the person I gave it to has more experience with typewriters.   I still think I might like a smaller/lighter typewriter at some point, but handwriting works just as well for me when I don't want to use the computer at this moment in my life!
show more
2 months ago
communication

As you can see, I have not written about my garden at all this summer! (I have however had 10 stories accepted for publication this year - since I one day hope to earn decent money and entertain people through fiction writing, it has been a summer of hope and growth in that arena of pursuit.)

However, because I've been busy writing, I didn't do a lot in the garden this summer - but I thought I'd drop in here and leave a basic record in case I return to it with more care next year. I hope to because while I've been very happy with my writing, there is a physical cost to spending considerable time sitting and staring at a screen page (or paper) instead of doing light work outside, which I recognize and feel.

I planted green beans twice - the second crop is just starting to form. I discovered a new way to preserve beans after a harvest - making a sort of dill/salt slurry to cover fresh beans in a jar. I don't know how long before beans stored in this manner would start to go bad, as we eat them before any started going moldy.

Lettuce grew well this year in the spring - it was cooler than in previous years. I didn't get orach again but ate a lot of sorrel. Harvested wheat that had self-seeded from last year. Didn't process it, just cut it and made a little wheat sheaf for decoration.

Grew some strawberries, transplanted rhubarb, harvested more currants then I knew what to do with, ate all the saskatoon berries I could get off two bushes and planted a third for next year. Tried to get nasturtium to grow up on a trellis, but that didn't really work - tried growing morning glories against the side of shed - it's growing all right, some of the vine is eight feet tall, lots of leaves - but no flowers, despite neighbours having morning glories blossoming. I think perhaps I have been watering them too much.

Planted runner beans again, essentially for the hummingbirds. Let the chicory bloom, that was great, I didn't know it grows so tall! It grew tall and attracted goldfinches. I have a couple of tomato plants sprawling in the garden now, losing some fruit to splitting again, but not as badly as before. The tomatoes are starting to ripen now and I hope to get a couple of quite sizeable tomatoes to slice in the next couple of weeks, baring frost.

Oh, and my lilac bush bloomed at last! It bloomed purple flowers. I thought I'd purchased a white-flowering variety, but I guess the tags were mixed up somewhere along the line before I got to the shop.


End of Garden Season inventory of perennial/overwinterable plants in yards: (42 at end of last year)

The Sock-o a Sock-o Darn Tough vs. Smartwool vs. Icebreaker Thread
Interesting two sock suggestion! (I'm going to give one of my characters in a story two pairs of socks to wear now.)
show more
6 months ago
gear
What happens next - dealing with after you're published
I am delighted to return to the Permies forum and learn that you have successfully published your book!

I am also a writer (although no book yet) and have recently become more concerned with the 'business' part of the work - setting up a social media presence, submitting work to appropriate platforms/publishers, trying to develop positive relations with other writers, editors, publishers, etc. This has resulted in me spending at least half my "writing" time not actually creating story, although having established some systems/routines now I'm getting some time back.

It can be quite frustrating, having to deal with writing "business" rather than writing. But it does seem to be the way it is for most writers these days. It is what results from what seems to be an increasingly competitive creative writing environment, where it is more difficult to earn any money through writing then it used to be. (I sold a short story for under $4 the other day. It took me well over ten hours to write. How many other professions do we as a society recompense this way? No, I don't write to become rich, but I could certainly write more if it paid better then 30 cents an hour on a lucky day.)

I don't know that it has to be this way. I think there is probably still more then room for "reclusive" writers - or to put it another way, for writers who decide their energy is best spent creating rather then responding to responses to their creativity. I hope so.

Your strongest response to your questioners -fans and critics alike, is your next book.
show more
6 months ago
writing
Writing Software
I just want to add that I've found it very helpful during the editing stage to print out a hard copy, find somewhere quiet where no one else can hear you, and read what you've written out loud to yourself. Even better is to have someone else read your writing out to you. You will catch typos, awkward constructs, and learn where readers struggle with lyric flow. The ear as editing software!
show more
6 months ago
writing

Music of the Moment

Bumblebee Garden Project
This year I forgot to plant anise-hyssop, although some came up by itself. (I collected much of the seeds last year hoping to start another flower patch. I'm hoping I can still use the seeds next spring.)

Today in the bumble-bee bed - the comfrey, lavender, a little hyssop, some daisies, sage (some of which grew so big this spring I had to relocate as it was trying to smother the forsythia) and a growing-taller forsythia, plus some zinnias and a nasturtium which is currently growing over one of the comfrey plants!

Earlier I planted a couple of old sunflower seeds, and one very short but viable sunflower popped up and seeded, even though I didn't hand water this bed much this year. (Part of it does get water from the automatic irrigation system.)

I didn't do very much garden-wise this year (I hope to write a post in my main project thread about what I did do soon) but I did get several compliments about how this flower bed was looking!
show more
6 months ago
gardening for beginners

typewriter - using, fixing, and restoring old typewriters
I acquired a manual typewriter this summer - a big heavy thing, I think it's from the 1970s or 80s. It was free!

It was quite grotty, but I cleaned it. There was a spider living in it, who surprised me one day, but she was friendly. The typewriter is missing a few keys and I have yet to figure out how to set the right margin, but it came with a functional ribbon, so I have used it a bit - typing up a couple of letters and the first draft of a folk-tale retelling. It is noisy as all heck, and I used it too much at first, without taking breaks, giving myself a case of ouchy finger-wrists that lasted about a week!

I hope to use it to type out another first draft (of a shorter story! taking more breaks!) soon!

If I could get one for cheap I would likely try to get a smaller machine. Thinking the smaller ones make a little less noise? I swear neighbours four doors down can hear me when I'm typing on this monster!