I'm trying
Paul, I know you and I have not always agreed on things in the past...but I do admire your willingness to be there in the trenches, everyday, fighting the good fight against impossible odds.  I have tried to think of ways help improve those odds, but that is obviously not what I am good at.  There is just too much money in the system you are fighting against.  As they have found in the illegal drug war or tv money in collage sports (and now the Name Image and Likeness (NIL) monies) with all that money is impossible to stop and do the right thing.  And you Paul are up against the king pin of it all...oil and gas monies.  That is such a third rail that they won't even to touch it to stop a bad war (like any war is good, right?).

I got the wind knocked out of me last Monday when I watched the movie "Planet of Humans".  I had my suspicions of what really is "Green" and how can it really be decoupled from "oil and gas" energy, but that movie made me ill.  And the scenes of them pulling the dying orangutans out of the clear cuts, uggh.  I remember 40 years ago in engineering school as we discussed nuclear power plants construction our professor, even then, questioned with so much oil and gas energy going into the construction and maintenance of the plants, fuels and spent fuel, would a nuclear power plant ever reach the break even point, much less on the positive side for energy produced.   And this morning on the CBS Morning show for Earth Day they touched on the fallacy of the wood pellet green renewable energy, much of which is being shipped to Europe from our clear cut forests anyway.  Maybe that can help get the ball rolling better for a better planet.   But I doubt it, as the oil and gas money is everywhere and it is perverting the system and people don't realize it.  And despite what you saw on the tv show "Yellowstone"  you can't really fight a hedge fund (or the oil and gas industry) with those really, really deep pockets.  I wish there were better answers.
show more
4 weeks ago
paul wheaton's pseudo blog

Do I really need batteries for a solar energy system?
I like your two examples of the Hydro battery and the thermal battery. Batteries that are not electrical batteries.   I forget the name but there’s a Perma culture place up in Tennessee that has a huge water tank. When there’s enough sun, solar power runs the well pump and it fills the tank and if it overflows it overflows to a small creek. So it’s like the battery in the system. Without sun for days there’s water in it and has water pressure from just the head height in the system. The same with the freezer. It runs when the sun is shining and when it’s not, it’s well insulated. Just remember on the freezer keep it full of water bottles if you don’t have enough food to totally fill it up.  The stored cold is the battery.  We just need to think of other examples like these …
show more
1 month ago
solar
Predators and protein in your Chicken feed
If a barnyard chicken grew to the size of an ostrich I’d be scared to death of it. For sure keep the kids away from it.
show more
1 year ago
predators
What have you learned from 2020 and relationships?

Joshua Bertram wrote:
In the last 300 days, I'd guesstimate I've gone to the grocery store more than 250 times (I shop daily after work and also on the weekends).  I just buy a couple of items at a time.  Fresh fruit, and beer mainly, lol.


So it is just not me...funny how bananas keep better than beer :)
show more
1 year ago
permaculture singles

Rob Griffin wrote:Not to sure how permie “flex seal” is but worked.  I built a Bill Mollison herb garden (from his permaculture book) for my mom probably 30 years ago with the small pond at the bottom of the spiral but I never could get it to hold water.


Rob, it doesn't sound very permie, does it? I believe there are threads about sealing ponds here in the forums, but I'm guessing it would be for dug, mud bottom ponds. I do know pigs can be used to seal mud, but I don't know exactly how.


The little pond at the end of the herb garden spiral from Bill Mollison’s book was not that big, maybe 25 gallons, 3 feet in diameter.  I had a good chuckle thinking about trying to train a pig do use its front two legs to just jump up and down in it to try to seal the bottom.
show more
1 year ago
ponds

What are electric chainsaws like compared to fuel ones?
I found the secret of gas engine tools is to drain the gas when you finish using it, even if you plan on using it again tomorrow, then start it up and run it till it quits. Then try to start it a couple more times. Then put it away.  I’ve had a cheap Poulan chainsaw I’ve had for 30 years and I’ve never had a problem starting it. It actually has the same spark plug all those years I’ve never changed it and I’ve used that saw a bunch.
show more
1 year ago
gear

My Unexpected Frog Pond
I fixed the concrete birdbath a couple years ago with the black flex seal paint and it has held up quite well.  Not to sure how permie “flex seal” is but worked.  I built a Bill Mollison herb garden (from his permaculture book) for my mom probably 30 years ago with the small pond at the bottom of the spiral but I never could get it to hold water. Too bad they didn’t have flex seal back then.
show more
1 year ago
ponds 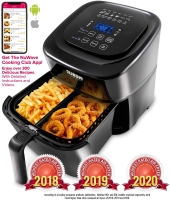 If you have an air fryer, how do you like it? And what do you cook in it?
That was the one with the light wet batter and sprayed with olive oil. It’s just a pain to keep the petals separated while it’s cooking.  You’re cooking time will vary depending on the size and type of onion.  Good thing is it didn’t seem like you could over cook it.
show more
1 year ago
cooking

What are electric chainsaws like compared to fuel ones?
The only electric chainsaw I’ve used was at Wheaton lab during a PDC.  We were cutting down a large tree as many had not felled a tree before.  I agree with the earlier post that they can be dangerous because they kick off when they feel they are being stressed or over heated or whatever.  Problem is that was at the critical time during the cut when we needed more power.  It made me extremely nervous during the final minutes of the cut when it kept kicking off and I never had that feeling using a gas saw.
show more
1 year ago
gear