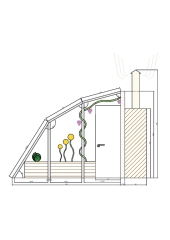 How to insulate a lifted floor properly?

As I fear too, the flow of hair will drastically increment the amount of radiated energy. Yet, how is that nordic styles and many other cold weather buildings are lifted?
Arent they losing too much energy? (maybe they didnt know back then?). Lifting the house is only for water insulation. Maybe it does help that it doesnt contact with the cold humid soil?
If Im gonna raise the house, but will be placing perimetral walls in the beneath space, wouldnt it be better to raise the house as little as needed to fight the water?

I really apreciate your ideas. I firstly was thinking of a lifted greenhouse, aswell as the house, but then I realized that not only the structure will need to be strong enough to deal with all the additional weight, but also be able to deal with the air leaks and the humidity insulation problem, since I expect it to be quite more humid than the interior of the house, aswell as getting constantly wet during the watering proccess or other procceses alike. Therefore, the greenhouse is now planned at the ground level, but not sunken.
Thanks for the SHCS information. That is precisely how I expect to build mine. I intend to prepare the soil beneath the surface level: composition and underground pipes.
After build the greenhouse itself on top of this area, aswell as leaning-on the house.
¿Should the walls that go below the house be insulated aswell, or are they only to stop the wind? I might think that insulating them would be good, but might be unpractically expensive given the amount of materials and their price. Its effectiveness might also be considerably reduced if there is an opening that makes air flow thru this enclosed space, removing gathered moisture.

Thank you so much for your idea. However Im from chile and the pannels of the material, that I have seen on sale, were outrageously expensive. They are that expensive that people tend to buy the pannels which conform the medicine transportation chambers, as vaccines in ship containers, in order to be able to afford them. I nearly bought some to build my own refrigerator, but I didnt. I will keep watching the market's products and their pricing. Thank you so much for the considerations and details in the procedure.


Is there any possible use to the area thats covered by the house? The area of ground underneath the house?
How thick should the glass be in order to achieve a minimal state of insulation?
Ive picked the lifted style because its building price is like 15% less than the one with foundations. Also, the zone is quite humid and rainy and Im NOT the one who will be looking after the damn humidity leaks each day (nobody either is, since Ill live alone; I might aswell train some chickens to do the chores).
Maybe Im being too dramatical, I come from a city which is surrounded by the driest deserts in a radius of at least 600 km. The precipitation is something like 10 minutes of really really light rain a year; and thats only because a phenomenom that has place in the crest of Los Andes, many kilometers up into the mountainous chain. So, maybe, the lifted-floor makes no real differece apart from the price of the building.

I will let you guys know which system I end up using, among with its collected data and pictures. Id really appreciate if you could lay an eye on the thread thats on my signature.
Thank you all for the kindness and good will; aswell as the good ideas :P
show more
4 years ago
greenhouses

Marcus Billings wrote:you could always paint the barrel black and the sun would cook anything in it

Nice and genocidal, havent thought of cooking them before, nice idea.
show more
4 years ago
chickens

Rainwater harvesting for chickens
Even tho the bacteria carried by bugs differs rdically from what can settle in a dark, humid pipe; I too think that the chickens have a much suited organism to endure such lifestyle they have developed, over millions of years. In fact, one of the most ancient warm blooded, DNA structure nowadays.

However, I totally differ from the de-mineralization theory, being that "pure" water (for it is not pure at all, but without mineral ions) would drain electric-charged particules from inside the living cell due ¿concentration gradient? We human beings would be doomed if our bottled water behaved like that.

I do not know why would you adviced against the collection of rain water, but my most educated guess would be because of undesirable and unmanagable microscopic living beings. Beings easily to erradicate with really unharmful chems. A high salt solution is enough to bring havoc in the little fellow's villages.
show more
4 years ago
chickens

Rainwater tank questions: evaporation and sunlight control
That seems more than enough, remember that the opening is a possible gateway for undesired microscopic living beings and their astonishing mating rythm.
show more
4 years ago
rainwater catchment

How to insulate a lifted floor properly?
Thank you so much for the repplies, both seem like really good ideas.

The foundation will have no walls, since it will be a lifted house, like the image Ill attach below, but it was indeed interesting to consider.

I too think rockwhool would be the best, I read that a combination of "glasswhool" and rockwhool is the best, since the glass one is impermeable and the rock isnt. Which allows you to circulate the absorved moisture thru the rockwhool layer, out of the house. Somehow

Thank you all so so much for the repplies, i invite you to check the post on my signature jojojo im needing help there too. Im considering using a BBMH to heat both living-kitchen and greenhouse

Rainwater tank questions: evaporation and sunlight control
Any amount of light will produce algae, if its a few sun rays, you will get a little algae, which will probably die once its away from the "sun-roof". Considering the amount of time the superficial water will be iddle, you will be able to determine wether the algae expansion is impactful enough. There is a chance that this layer of algae will continually rotate due the effect of the water intake, displacing the mono-celular protoplants out of the iluminated zone, causing its death. Afterwards, a new layer of cells will begin to form on the iluminated zone, if enough time is given for it to become considerable. Therefore, you will be the only one able to determine the amount of cells and their impact on your collection system, aswell as on your filtering system, since it will strictly depend on the temperatue, amount of light, water intake, specie of the algae and much more, like pH, hardness of the liquid and blablabla. Not nice to willingly add extra unneeded matter into any system.

I cant see any hole that connects the tank with the air but you have to consider the following. Water only goes from liquid to gas when the saturation level of the inmediately-positioned gas (as would be the air above the water in your glass) reaches a certain level. This saturation will be affected by caloric energy (heat), pressure and volume, with all of there variables compromised with each other.

Soooo, only if an excesive amount of heat, sudden disminution of pressure (cannot happen if the thing is open to the atmosphere), or removal of the saturated air. If the opening if big enough or placed in a way that generates an airflow, the exiting gas will take with itself your collected water.

In the other hand, if the air flow is minimal, either because the exhaust pipe has the needed physical configuration; or because of the air flow, perhaps due the temperature changes or many other negligible theories; the amount of vapor water will be too small to effectively lose water by evaporation.

Rainwater harvesting for chickens
I guess it is because all the bacteria that grows up, stacking layers of bacteria over layers, creating a solid juncture between any surface and the bacteria colony, just like the bacteria that colonize the surface of your teeth. Therefore, growing an unwated and, potentially, quite dangerous biofilm consisting in a mono  or multi culture of bacteria.

Needless to say, the spectre of the bacteria realm is huge and the odds of growing a really really dangerous bacteria are quite high (most of critical diseases are caused by parasiting bacteria colonies), which will survive only because of the existance of uncontamined water. The bacteria will travel thru this medium untill they settle into a living host, which not only will provide humidity, but food and warmth.

So, unless you design an stainless/heavy-duty plastic system among all of its sections, the recollection, distribution and delivery. Which would be entirely sanitized weekly (maybe even sooner). There are several methods for sanitizing the pipes and the water.

I would suggest making a biofilter inside the barrel, having it filtering the collected water, yet, theres still a minimal percentage of bacteria that will travel thru the film. Usually, that wouldnt be a problem because we, humans, are powerful enough to erradicate a wide spectre of weakened bacterias, but if that one gets to settle in one of your chickens system, greet your new aviar infectation (having to cremate all of your babies must be something unspeakably horrible)

I dont know if the biofilter will be sufficient to readily fill a 55 gal drum, but it might be worth the try. For sure, worth the study. I havent read much about it so wont say anything ehehhe, but it should be doable.

I guess I would rather stick with chlorine, as an oxidizer of biological matter. Most of the unused chlorine particles with collide with each other in the water, forming "gas chlorine", and thus, it leaving the liquid fluid and flowing into the atmosphere. You will only have yo deal with the chloramine (the used chlorine), but that one molecule is extremely hard to get rid off, and if you are only dealing with potential bacterias, the amount of chloramine should be minimal (considering you have removed all kind of trash and material that builds up both in your roof and inside the water-system.

Not because of the insulation nor weight, but by the forces applied on the RMH when the vehicle is in displacement. I can nearly hear the roadbumps crushing the bricks mortar. Even if the damage is not easily visible at first, it will be happening untill the inevitable destruction.

If you plan moving the RMH into the vehicile once its static and out before it moves, each time; or dismantling the whole RMH for travelling and mounting it once settled; i imagine both of those ideas are quite undesirable.
show more
4 years ago
rocket mass heaters

Pat Slater wrote:I have a liberty bell stove that I have some questions on. That model stove? Does it have any value? It is in great condition. How to add pic to this forum?

When replying, between the end of the writting text and the "preview" and "submit" buttons you will find the attachments section, from there, you just simple "explore" your computre untill you find the desired file. Note that only .pgn and .jpeg (i think) will be displayed in the thread, other kind of files will be attached for downloads only. You may also add a brief description.