posted 2 years ago
I am planning on harvesting rainwater from my barn roof to make it easier to water my chickens.  The plan is to have a 55 gallon drum feed 20 chicken nipples.   My roof is 10' by 16' and is covered with tin.  In the past I have heard that this shouldn't be done but I can't remember why.  Something about rainwater needing to be treated or amended before giving it to livestock but I really don't know what it was.  Can anyone help me out with this?  It would be a great chore to get rid of,  checking the water sounds so much better than filling.

posted 2 years ago
I guess it is because all the bacteria that grows up, stacking layers of bacteria over layers, creating a solid juncture between any surface and the bacteria colony, just like the bacteria that colonize the surface of your teeth. Therefore, growing an unwated and, potentially, quite dangerous biofilm consisting in a mono  or multi culture of bacteria.

Needless to say, the spectre of the bacteria realm is huge and the odds of growing a really really dangerous bacteria are quite high (most of critical diseases are caused by parasiting bacteria colonies), which will survive only because of the existance of uncontamined water. The bacteria will travel thru this medium untill they settle into a living host, which not only will provide humidity, but food and warmth.

So, unless you design an stainless/heavy-duty plastic system among all of its sections, the recollection, distribution and delivery. Which would be entirely sanitized weekly (maybe even sooner). There are several methods for sanitizing the pipes and the water.

I would suggest making a biofilter inside the barrel, having it filtering the collected water, yet, theres still a minimal percentage of bacteria that will travel thru the film. Usually, that wouldnt be a problem because we, humans, are powerful enough to erradicate a wide spectre of weakened bacterias, but if that one gets to settle in one of your chickens system, greet your new aviar infectation (having to cremate all of your babies must be something unspeakably horrible)

I dont know if the biofilter will be sufficient to readily fill a 55 gal drum, but it might be worth the try. For sure, worth the study. I havent read much about it so wont say anything ehehhe, but it should be doable.

I guess I would rather stick with chlorine, as an oxidizer of biological matter. Most of the unused chlorine particles with collide with each other in the water, forming "gas chlorine", and thus, it leaving the liquid fluid and flowing into the atmosphere. You will only have yo deal with the chloramine (the used chlorine), but that one molecule is extremely hard to get rid off, and if you are only dealing with potential bacterias, the amount of chloramine should be minimal (considering you have removed all kind of trash and material that builds up both in your roof and inside the water-system.

Hope it helps ya honey, and also hope you dont forget it this time :D
Take care

posted 2 years ago
I'm not to worried about bacteria as any system has to be "scrubbed" every now and then.  I thought there was a mineral deficiency in rainwater that makes drinking it hard on the body as it leeches minerals from the body or something of that nature.  Again, I can't remember where I heard this, I think when I was looking into harvesting rainwater to drink in our house.

Stew Haggerty wrote:..I thought there was a mineral deficiency in rainwater that makes drinking it hard on the body as it leeches minerals from the body or something of that nature.


So potential hazards from rainwater are:
toxic materials used in the roofing (probably not an issue for you)
bacteria/viruses/parasites on the roof from bird poop etc.
there is a potentially deadly parasite found in raccoon poop, if there are raccoons in your area this is a serious concern
other biological hazards

A "roof washer" or "first flush diverter" can alleviate many of these issues.  Basically these just divert the first 10 gallons or so of rainwater(which will carry most of the contamination) somewhere other than your barrel.

In addition to that you could elevate your barrel (to provide some water pressure) and then run it through a ceramic filter before going to the chicken nipples.  This will remove any parasites, most bacteria and some viruses.
Or you could run it through a slow sand filter, but that is quite a bit more difficult to setup and keep running properly, especially when processing relatively small quantities of water.

posted 2 years ago
I wouldn't be overly concerned with bacteria from your roof runoff. Bugs are notorious for being carriers of bacteria, sometimes nasty bacteria, and chickens eat them all the time. I've seen my chickens eat some gross things. My chickens drink from a 3.5 gallon hanging fount, and it gets refilled when it gets low, about every 3rd day. Every day I pour out the filthy water and crud that accumulates in the little ring trough they drink from, but I know that the turd hanging out in the water along with the other dirt has been there at least a couple hours and they've been drinking from it. My chickens are healthy, they act normal and their poop looks normal. It's very rare I see a little puddle of chicken diarrhea, and that always clears up on its own. If I took a sip of that water, I'm also buying an expensive stay at the hospital, but chicken guts are different.

posted 2 years ago
Even tho the bacteria carried by bugs differs rdically from what can settle in a dark, humid pipe; I too think that the chickens have a much suited organism to endure such lifestyle they have developed, over millions of years. In fact, one of the most ancient warm blooded, DNA structure nowadays.

However, I totally differ from the de-mineralization theory, being that "pure" water (for it is not pure at all, but without mineral ions) would drain electric-charged particules from inside the living cell due ¿concentration gradient? We human beings would be doomed if our bottled water behaved like that.

I do not know why would you adviced against the collection of rain water, but my most educated guess would be because of undesirable and unmanagable microscopic living beings. Beings easily to erradicate with really unharmful chems. A high salt solution is enough to bring havoc in the little fellow's villages.

posted 2 years ago
Great idea Stew, and I'm not just saying that because I've been doing it for 6 years (kept chickens for over 20 years).  My chickens are free range on almost 4 acres.  They are in fantastic health.  My coops (Metal roofed) are on trailers and I move the coops periodically  to reduce over-grazing (no fencing).  In each of the four areas that I move the coop, I've dug small depressions about 24" deep and roughly a 3' circle.  Then I line them with discarded pool lining and put stone around the edges.  The gutters on my coops are positioned directly over them.  When it rains, these fill up and that is the primary sources of water for my chickens.  I've even created a small stream from one of them that winds its way to a hugelkulture mound.  I only fill the water cans when it hasn't rained in a while.  I don't think what you proposing will be a problem, but you could always paint the barrel black and the sun would cook anything in it, but I think that's overkill. Mineral content of water is thin at best, what they are eating will be where they get the minerals.  Good luck.
Agustin Arancibia
Posts: 28
Location: Chillan, Chile, zone 9b, 475m above the sea
3
I like...

Marcus Billings wrote:you could always paint the barrel black and the sun would cook anything in it

Nice and genocidal, havent thought of cooking them before, nice idea.

posted 2 years ago
I've went ahead and built the frame for the rainbarrel using some reclaimed 6 x 6 that I had laying around and it all went rather well.  I had chicks arriving this past Tuesday so after reading everyone's suggestions I went ahead with my plans.  I ran a hose to some 3/4" pvc that I attached some small bowls to, so that should hopefully be the chicks main water source for the next 2 weeks until they're out on pasture.  Then my layers will have it as they're main source until freeze up.  As you can see I haven't had time to actally put up an eavestrough yet so I've just filled it using the hose for now.  I also have room for a second barrel if I need it but I think one should be enough.
20170912_160841.jpg 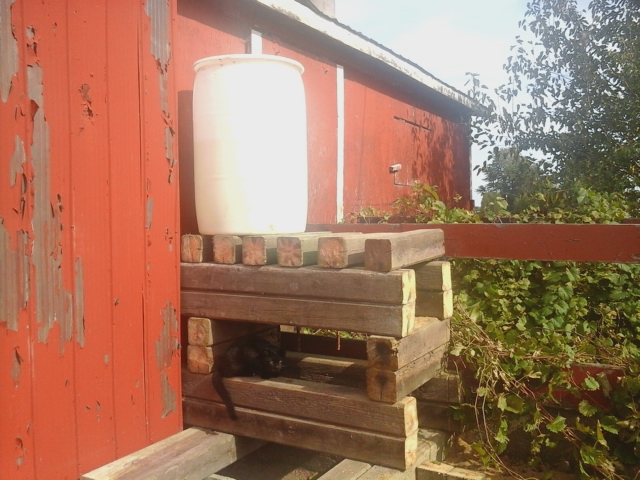 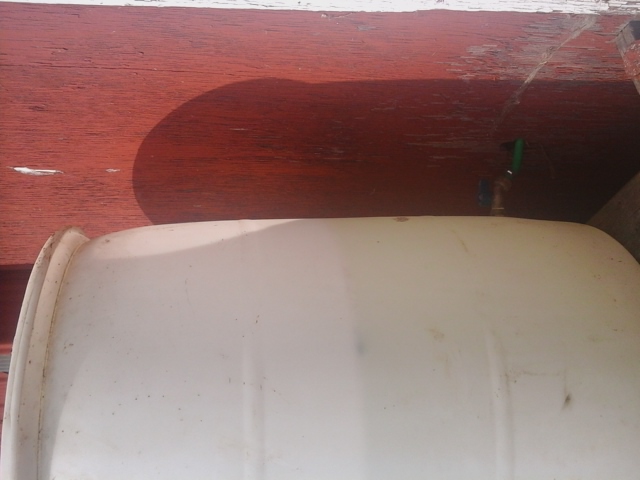 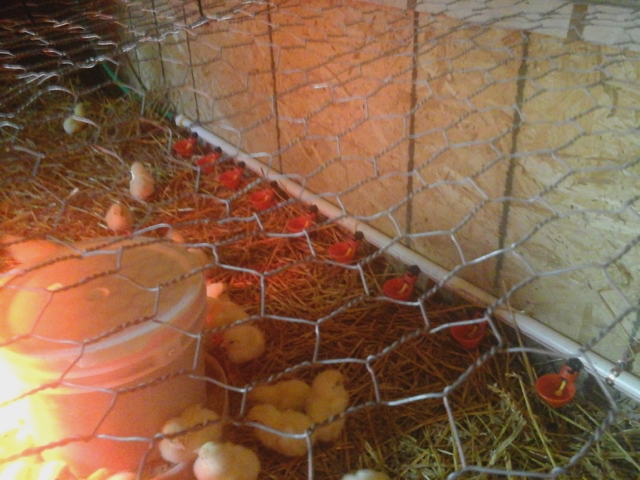 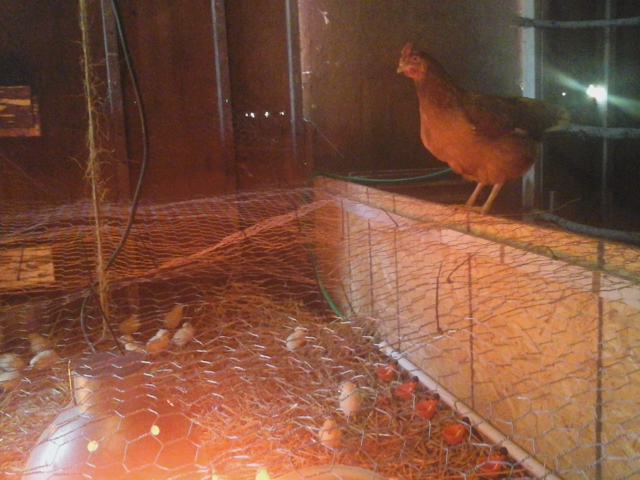 posted 2 years ago
It is preferable to not let light get to the stored water. Painting the barrel is one option.

posted 2 years ago
I have some heavy weatherproof material that I am planning on wrapping the barrel with that is black on one side and white on the other.  I'm hoping that it will extend the life of the system in the spring and fall if it heats the water so that I don't have to winterize so early.  In the summer I can just turn it inside out to reflect light.  The problem as always is that there just aren't enough hours in a day, particularly at this time of year.

Johnmark Hatfield
Posts: 65
4
posted 2 years ago
So im a permie. Maybe youve heard of us. We try to mimic nature in creative ways to make systems that are both sustainable and evolution tested. How have animals and humans survived drinking water that didnt come from a chlorine fed and cauldren boiled pool for the last 66 million years? Or at least 50k years since more modern humans came about.

I have the idea that we have had a symbiotic relationship with our dirt and bodies. Dirt is composed of petrified organic material (rock/sand), weathered petrified organic material (clay), bacteria that is eating organic material (humus), and dead bacteria(silt). Our bodies, and all bodies, have more microbes than we do cells, so there is an obvious partnership going on. Or at least there used to be. There are bad bacteria everywhere, but unnatural systems and lifestyles have diminished the more populous and strong bacteria to a minority and this is then reflected in disease - in conjunction with un natural cellular division(cancer).

I have no scientific study to back the next idea, but i believe it. I think if an animal is only exposed to locally sourced food and materials that are within a system that thrives on this principal in reciprocation, overgrowth and imbalance of bad bacterias are either non existant or do not exist in amounts that would override the immune system of an animal in such an environment. It must be exposed to local bacteria, local pollen, local dirt, local tree gases, etc. in order to be in such a condition.

Can we harvest rainwater for chickens? Of course. Is there any other way animals have drank water for the last billion years?