A Smith
Posts: 4
posted 2 years ago
Hi, I just installed a 1600 gallon rainwater catchment tank and have a couple questions for people more experienced than I:

1. As you can see in the photo, I have a white colored leaf filter just above the tank opening.  Will this let in too much sunlight and let algae grow?
2. Do you think too much evaporation will flow out of this opening at top? If so, how can I control the evaporation? 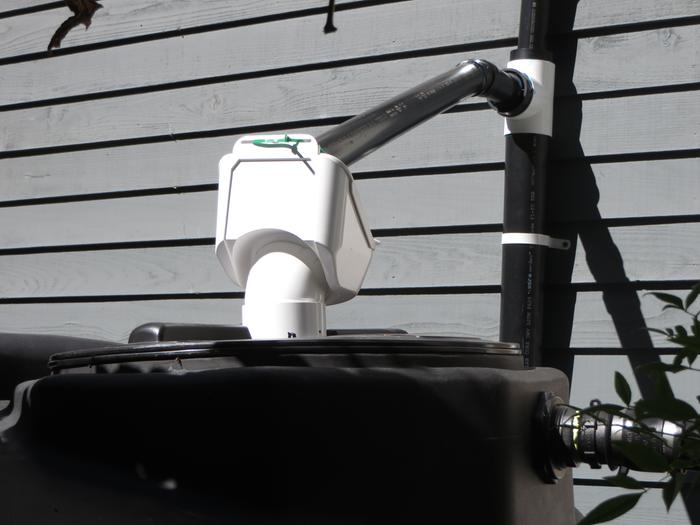 posted 2 years ago
Any amount of light will produce algae, if its a few sun rays, you will get a little algae, which will probably die once its away from the "sun-roof". Considering the amount of time the superficial water will be iddle, you will be able to determine wether the algae expansion is impactful enough. There is a chance that this layer of algae will continually rotate due the effect of the water intake, displacing the mono-celular protoplants out of the iluminated zone, causing its death. Afterwards, a new layer of cells will begin to form on the iluminated zone, if enough time is given for it to become considerable. Therefore, you will be the only one able to determine the amount of cells and their impact on your collection system, aswell as on your filtering system, since it will strictly depend on the temperatue, amount of light, water intake, specie of the algae and much more, like pH, hardness of the liquid and blablabla. Not nice to willingly add extra unneeded matter into any system.

I cant see any hole that connects the tank with the air but you have to consider the following. Water only goes from liquid to gas when the saturation level of the inmediately-positioned gas (as would be the air above the water in your glass) reaches a certain level. This saturation will be affected by caloric energy (heat), pressure and volume, with all of there variables compromised with each other.

Soooo, only if an excesive amount of heat, sudden disminution of pressure (cannot happen if the thing is open to the atmosphere), or removal of the saturated air. If the opening if big enough or placed in a way that generates an airflow, the exiting gas will take with itself your collected water.

In the other hand, if the air flow is minimal, either because the exhaust pipe has the needed physical configuration; or because of the air flow, perhaps due the temperature changes or many other negligible theories; the amount of vapor water will be too small to effectively lose water by evaporation.

:D:D hope it helps, Id like to see the outcome,
Sayonara

A Smith
Posts: 4
posted 2 years ago
Thanks.  I think I will build a lightweight black "roof" over the white part where the sun could get in. I could add baffles inside so that no light could bounce in. Or just drape an opaque sheet of some kind over it.

Both of those would also cut down on air movement so maybe reduce the evaporation loss as well.
Agustin Arancibia
Posts: 28
Location: Chillan, Chile, zone 9b, 475m above the sea
3
I like...

posted 2 years ago
That seems more than enough, remember that the opening is a possible gateway for undesired microscopic living beings and their astonishing mating rythm.

Bobby Keeland
Posts: 6
Location: Southern Louisiana
2
posted 2 years ago
I would not worry nearly as much about the amount of light getting in through the first flush as I would about that black tank being out in the sun. Hot water evaporates. We have two tanks that are 2,600 gallons each. They are under a roof to keep them from overheating in the summer sun. After each rainfall I have to get up on a ladder to clean the leaves and other debris off of the screen at the top of the first flush. In addition I have to clean the screen at the top of each tank. If I don't clean the tank-top screens a lot of rainfall spills down the side of the tanks. I also have two filters between the tanks and the water pump that need to be cleaned about monthly. Two more fine filters and a UV light treatment are located after the water pump. This setup has worked very well for the past 6 months.
Chris McLeod
Posts: 59
Location: Cherokee, Victoria, Australia
5
posted 2 years ago
Hi there!

I wouldn't worry too much about evaporation and algae. If you are at all concerned, you may be surprised to know that your plastic down pipes will be already full of algae (green algae), they are part of the natural flora - as long as it is not blue-green algae which produces toxins and that seems unlikely in a water tank system.

I have about 105,000 Litres of water storage in tanks and that is my primary (and only) water source and I've been drinking the stuff for about a decade with no health issues.

You have to remember that in water catchments there are plenty of animals doing their business in and around the water supply. We're much hardier creatures than you may guess.

As to heat, you'll find that with a black tank, the air above the water inside the tank will be quite warm - even over winter.

The water itself won't heat up too much unless you get a few days in a row past 40'C.

Cool temperate food forest, vegetables, herbs, chickens and bees all Down Under

Jim Fry
Posts: 307
Location: Stone Garden Farm Richfield Twp., Ohio
24
posted 2 years ago
I heard a story one time about an old lady who got her water from a cistern. The lady never had the least problem with her water, and she was always healthy. ...But other folks who visited her often went home ill. Someone finally checked her cistern. There was a very old and rotted raccoon in it. The old lady was used to it and had developed immunity to the problem, but her visitors had not. Moral? Well, maybe, ..."Keep an eye on what you drink, and what's in it".
We have a well, so have no cistern/water tank issues. But the water tank for our animals used to always grows a good crop of mosquitoes. We have learned to keep gold fish in their tank. It doesn't hurt the animals and they keep the tank algae and mosquito free. As long as the tank doesn't freeze to the bottom, the fish always survive the winters.

That is possibly true, but what makes you believe that I would not install stainless steel mesh filters on the inlets to those water tanks?

The other thing is that culturally some countries are more attuned to consuming ground water from wells than others. In Australia we have a preference for rain water tanks because of the salt levels in the ground. Wells can often bring salts back to the surface and that is not good. In many countries wells are also contaminated by other minerals leeching out of the surrounding rocks, and I believe India has some areas where the ground water from deep wells is contaminated with arsenic for example. And fracking in the US is not problem free for ground water tables from my understanding.

Plus, the other thing to consider with wells is the availability of energy and pumps to lift the water from deep aquifers. Lifting water is not a cheap process (I am not connected to the electricity grid and rely 100% on solar power). I'm not actually sure how deep your wells are and that can make a difference, but here I know people who have water bores (what you call wells) and they can drop as far as 330+ feet. I'd be interested to hear about that aspect of your wells as it is such a different experience to here.

Cool temperate food forest, vegetables, herbs, chickens and bees all Down Under

Ray South
Posts: 69
Location: Northern Tablelands, NSW, Australia
2
posted 2 years ago
Been living on rain water for some time. Over the years I've had various tanks ranging from the current 2 stainless steel 26,000 L tanks to a 32,500 L grey plastic tank. Never had an issue with algae. There are usually two filters and a first flush mechanism. The rain passes through the first filter, similar to the one shown in your pic, which is principally a leaf and other largish debris catcher, then it passes into the first flush mechanism, basically a large tube which can be emptied when needed, and finally at the entrance to the tank itself, is a another stainless steel filter, fine enough to keep mosquitoes out. Same size mesh is on the overflow outlet. Rain water tanks are common here and many rural folk live entirely on rain water they collect from their roof.
Just FYI, we have another 26,000 L tank for the shed which is currently under construction. When completed, we'll have a tank capacity of 78,000 L (a bit over 20,000 gal).
David Wieland
Posts: 36
Location: Manotick (Ottawa), Ontario
3
posted 2 years ago
I don't know what A. Smith intends to use the rainwater for, but I installed a big tank (about 6 ft high) from the local farm co-op more than 15 years ago that I intended for watering a large garden. It's translucent white poly, which I expected would result in much algae if I didn't darken it. But I was too busy with other projects at the time to do anything with it and left it uncoated and uncovered. However, with only trees to shade it about half the day, I was pleasantly surprised to see that it never did develop significant algae -- only enough to give the water a green tinge.

In the intervening years, I've used this tank to hold pond water pumped out of my fish pond for spring cleaning, so it's well-inoculated with microorganisms and has a thin layer of sludge on the bottom below the drain outlet. (I've tried cleaning thoroughly a couple of times, but that's an awful lot of work.) If I intended this water for household use, I'd certainly screen out debris near the inlet (and not use it in pond cleaning

) and would filter and probably disinfect the outlet water, but I haven't needed anything beyond "roof washing" before connecting the main fill downspout to capture a rainfall.

Here are a couple of pictures taken this morning (with the main fill and hatch cover removed):