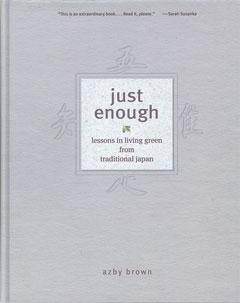 In Just Enough, author Azby Brown finds a number of lessons on living in a sustainable society during the Edo Period of Japan. This book tells stories of vanished ways of life from the point of view of a modern observer. Brown covering topics on everything from transportation, systems, and waste reduction to community, family life and social status.

posted 6 years ago
I'm partway through this book and am enjoying it immensely. Part history book, part idea book for the future, I think this has a lot ot offer permaculture enthusiasts.

A country on the brink of Environmental Collapse, in the Edo Period, Japan transformed its way of life and attitudes in just a few generations, to replenish the environment. Things are different now, and things weren't perfect then, but there is a lot of interesting things we can learn and perhaps adapt to our current situation.

I'll write a review later, but in the meantime, here's some more linkies and multimedia related to the book. 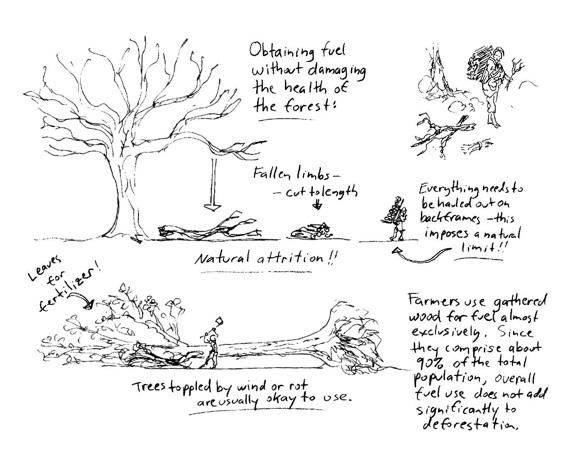 posted 6 years ago
I'm always happy to see historical examples of beneficial cultural change, which indicates human cultures aren't doomed to ruin everything and collapse, but are capable of choosing a different path.

Levente Andras
pollinator
Posts: 217
Location: Harghita County, Transylvania, Romania
11
posted 5 years ago
I have just finished reading this book. I enjoyed it and would warmly recommend it.

- The reader may be under the impression that the book is about practical solutions to the needs of everyday living: water, food, shelter, fuel, clothing, transportation… Instead, reading between the lines, I interpret it to be about societal and cultural integration: an entire society which works towards the same goal. (Not unlike bee or ant communities.) And this society is guided by a political class which realizes that the absolute power that it wields is not something to be taken for granted – that in the event of an ecological catastrophe (e.g., one caused by deforestation, severe water shortage, or the collapse of the agricultural system) the whole society, including the rich and powerful, will be in mortal danger.  Compare this with our present-day leaders, and draw your own conclusions…

- The book explicitly and implicitly highlights the importance of healthy cultural norms and values, reinforced - and enforced! - from the top down. The society described in the book is one in which restraint, simplicity, and modesty are seen as virtues, and practiced by everyone, regardless of wealth and social standing. On the other hand, greed, luxury, and wastefulness are not only frowned upon, but outright punished.  Greed is NOT good. Ability to afford luxury does NOT automatically give you the right to flaunt your wealth.

- Good management of natural resources requires societal cohesion, which in turn requires the subordination of the individual's aspirations to the community's greater goals.  At the opposite pole you would have modern Western society, which tolerates (if not encourages) individualism, self-centredness, and the go-it-alone type of behavior - the same society that produced Ayn Rand ...

- On a few of occasions, the book contrasts the traditional, sustainable technologies in Edo-period Japan with modernized, Westernised present-day Japan. It does not even allude to the factors that triggered the switch from those time-tested, sustainable solutions that worked so well, to the modern, highly technological fixes which were known to cause a whole bunch of environmental and societal problems.  I won’t go into these factors, but for those who are interested in the modern history of the region, I will suggest a few key words to search on Wikipedia: opening of Japan to Western trade, gunboat diplomacy, commodore Perry…
jordan barton
master steward

I want to start off saying i loved reading this book. I was much more interested in the life of the farmer than that of the samurai. So much of the book resonated with me from reading about Mobile merchants who would go around to homes carrying little charcoal braziers to repair broken plates with rice paste. To mobile merchants who would repair broken wooden umbrellas.

Alot of this book inspired me to think about how something can be reused after its current use has been finished.  The book made it appear that any piece of wood from purlans to small pieces of wood could be reused. Very little of it was thrown away. If a piece of wood was of no use it would be burnt for cooking food.

The book sounded like what some of permaculture was based on. Lots of reuse built into the culture.

One thing which was noteable was the author stating how little land was allocated to livestock. I realize that the people would eat fish, however i did not realize they would not really raise animals.


One thing i had a hard time understanding what that the houses that people made in Edo period did not sound very warm or well insulated. It looked like people had drafty houses with very little heating. I mean i have lived in an RV without any heat and when the RV was around 9*C it was quite enjoyable. However when it was colder than that it was not fun.


Part of the reason i gave this 8 out of 10 was due to the drawings. The descriptions in the drawings were hard to read, sometimes i couldn't make out what was written. I found myself going ..... why choose this type of font? Scratchy and thin, hard to read.

Posts: 2314
Location: Cascades of Oregon
378
posted 7 months ago
I was fortunate to find this book on Ebay @ $25.00 The Amazon price scared the peewaddlng out of me.