Fermentation business idea
My partner is now a member of a "shared commercial kitchen", after her having two prior kitchens (one solo, one shared with one other business). It might be something to look into, since the costs of "ownership" of your own commercial kitchen are high (setup, equipment, inspections, licenses, maintenance, supplies, rent, utilities). Sometimes churches have certified kitchens that they rent out, or in the shared kitchen model, there's a dozen or so fledgling food businesses, sharing the space at different times/days, for a reasonable fee.

Packaging, yes, same experience here. Supply chain breakdown...sellouts, shortages, and delays. Maybe there's jars, but no lids... maybe there's a hundred in stock! hooray! or maybe the inventory is off... punt and get a different jar? hope our labels fit?! Hopefully this gets back to normal before the fall.

Sampling, rules are usually set by local boards of health, and can be permissive or restrictive, there's not much getting around it though, you comply and serve, or don't serve. If they inspect on-site, they can shut you down if you fail.
Some places allow you to dispense your samples at an event, others they must be pre-portioned and sealed beforehand in a licensed kitchen.
show more
4 hours ago
fermentation

2274 people have watched the video on kickstarter.


21,000 people read one email, but only 2274 people have watched the video on kickstarter.


I do think that this is ...  different.   Really different.  Hard to get your head wrapped around.   At the same time, I think the video does a really good job of explaining it.


I think that this says that the poetry I wrote to the 21,000 was not inspiring enough to get people to look at the kickstarter and watch the video.  Does this seem reasonable?  Might there be other factors I haven't thought of yet?


Paul, I think that I mentioned this during discussion of one of the past Kickstarters... My dad once told me that the mortgage company that he had worked for would send out unsolicited marketing mail, and they would get 0.1% replies.
So for you, 100,000 emails --> 21,000 readings --> 2274 actions = 2.27% conversion rate. You have an email list that is made up of folks that are in some way at least interested, know who you are, or are previous backers; so I'd expect that sort of response.
I think your base of loyal backers is growing, but organically, not virally. I remember one past Kickstarter there was a bump (twice) when you tapped into others contact lists (Spirko, Harris). I'm guessing there was some shared/crossover interest in that project (rocket ovens, I think?). Anyone on board this go-round?

What sort of crossover do you see for this project (those who might have a contact list/subscribers to share)? YouTubers (Homesteading, DIY, Gardening, etc.)? Farmland trust organizations, already trying to maintain farmland and connect to new farmers?

Any idea about how many first-time Kickstarter backers in the mix? I know that I had already backed a couple of other projects before any of yours, so I was already familiar with the concept of crowdfunding, and the process itself... so that's another hurdle for some, but it's also a prime demographic.
I'm sure cracking the Kickstarter algorithm is a factor... how to get to the top of their ranking, of "liked projects", to get your project in front of fresh eyes that are already on Kickstarter looking for something to back.


show more
3 days ago
crowdfunding
Salvage project - rusty trampoline frame- input needed
I see one or two of these a year at our town's transfer station metal recycling heap... I've got a set of those legs, too bad there's not a doorway from my Boston to your Boston that I could just pass them through.

I've seen the "W" type, but also eight short straight legs that connect to a second ring on the ground? I feel like these designs allow for temporary placements on soft ground such as a lawn, and dragging aside to mow below. I imagine that more permanent installations with altered legs could be made.

I pass a house on my commute, that has a trampoline "installed" in the yard. There seems to be bricks encircling it, and I can assume that it is over a shallow pit to allow for the trampoline to do its thing. I feel like this could be an option if you can't salvage the legs?
I also think it could be safer? since an errant jump/bounce wouldn't be an additional 30 inch fall to the ground. Trampolines here seem to be equipped with a net to keep this from happening.

Your plan seems decent though. I've seen some of the "W" legs with half the tube rotted away (in the heap), yours doesn't sound that bad?
show more
1 week ago
gear

More about the ongoing upkeep - laundering/dry cleaning - of what, for business attire, is essentially an entire second set of clothes worn daily, 5 of 7 days.

But also about the quantity...? A bit of the need versus want distinction. (also: quantity --> larger closets = maybe a larger home to heat?)

"Fashion" also has a carbon footprint, as "new styles" drive sales and replacement of "old styles", not based on wear...
So not "wanting" to "stay in fashion" can free one to make choices about comfort, utility, durability. Wearing clothes both more often and for longer, that are repairable (and that have been repaired), until they no longer fit or are worn out.

100 ways to cut one's personal carbon footprint - in order of tons of carbon
Commuting versus work-from-home versus self employment/home-based business. Not a simple calculation to make, since traditional employment is tangled with wages/benefits/healthcare/degrees/training, and therefore switching jobs/careers is a weighty decision... Where to live could be easier to choose, especially if you are renting.

show more
1 week ago
paul wheaton's pseudo blog
Favorite "brushbarrow"?
I like the "Garden Way" cart (the large one) for things that will fit, and I usually can manage a load 1-1/2 to 2 times the height of the sides by standing a few "stakes" on the sides to contain the upper stuff.

For larger brush, like saplings or limbs from felling a tree, I prefer to just grab one or two by hand and drag. Anytime I've tried to get more clever, I spend extra time picking up the pieces when my "clever method" fails, than just making an extra trip on foot.

show more
1 week ago
woodland
Tool for in place wood mulching
I have also used a hatchet, axe, and machete against a stump to chop small limbs into kindling-size pieces. It is quite fast.
I find that breaking down larger branching sections with lopping shears first, makes that chopping easier to manage. That said, a lot can just be cut up with the loppers, without bending over so much.

As you mention, patience is another approach.
You could just do a short session of cutting per day/week, to not injure yourself.
Loppers use more of your body's larger muscles and are less likely than hand shears to produce a repetitive-motion injury such as carpal tunnel.
As the brush dries out you could break it down just by walking over it, utilizing your full body weight, and your largest muscles in your legs!
show more
2 weeks ago
gear
Used IBC totes
Do your own due diligence!! (homework) I have gotten some IBCs from local manufacturers that have held various things:
vegetable oils used for plastics molding (probably safe)
agave syrup (natural sweetener, definitely safe)
sodium lauryl/laureth sulfate (not so great, harmful to aquatic life) seller represented as "a derivative of coconut oil" since that's the odor one smells from it (and technically it is). Not very useful to me as any part of building an aquaponics system... It might rinse away with LOTS of water/pressure washing/soap, but the investment in time is better spent finding suitable IBCs in the first place. I'll use them for thermal mass in a greenhouse.
Here's what https://en.wikipedia.org/wiki/Sodium_laureth_sulfate says about it.

Use your good judgement. If buying directly from a user of the "product" and it is a food business, it's likely a known quantity. If buying from a reseller, check and be sure, identify the actual contents... also make sure you are given what you are paying for (the right ones, not the "right here" ones). If someone isn't forthright, or they aren't sure, I'd pass on it, You don't need to inherit a disposal problem.
show more
2 weeks ago
gear 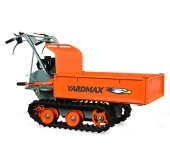 Tracked Wheelbarrows and/or Powered Wheelbarrows?
How about a simple earthen ramp. Dirt cheap, and a gentler slope to push a wheelbarrow up.
Afterwards, you dig it away and use it for the last of the berm, or just spread it out. Maybe it is made from topsoil, not sand and gravel, to use for a final layer on top or some gardens.
The ramp could also just wind around the berm, and just remain as a feature and be an easy pathway to get up top, for all the reasons you will need to in the future.

Tracked Wheelbarrows and/or Powered Wheelbarrows?
Michael, how about using a conveyor to get the soil UP onto the top of the berm?
You could feed it at ground level, possibly using the dumping trailer to not handle it twice.
Then you could use a rake or hoe to drag soil DOWNHILL to get it in the correct place if needed.

Probably best to just rent one. You might find an old, used one, but that could be a project itself...
show more
2 weeks ago
gear