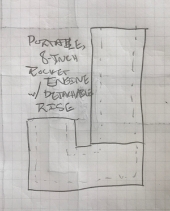 8-Inch Portable Modular Rocket Engine with Forge, Crucible, and Kiln Attachments
That is an interesting project but there seems to be a lot of exposed  ceramic fibre, are you concerned  about any heath issues as breathing in super heated ceramic fibers is said to be very dangerous?
show more
2 days ago
workshops

4” vortex rocket cook stove.
New video update….. it is getting a bit out of hand for such a small stove!
The glass is being pushed to the limit!

I did a few mods today, one was fitting  a piece of vermiculite under the chimney with a 95mm hole (the biggest hole saw I have) the chimney stack is 105 x 105 square.
I also fitted a step in the ceiling, that can be seen in the last few frames of the video.

I started the stove, top lit with a single fire starter block and the bottom door open, it was smoky for about four minutes and took about 10 minutes to get the vortex spinning nicely.
Then at 20 minutes I put the glass in place as the flame was going over the shelf but that did not stop it and the vortex was going like a mad thing. i left it like that, just running on the under floor air for 15 minutes but it was fast and furious running at 450+ on the hot plate!
I decided to remove the fire box glass and it really did take off in a crazy if not scary way!
Not in the video but I took a hot plate temp reading of 560c …. It was mad hot!! 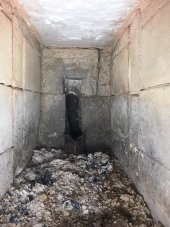 7" Batch box rebuild
Thomas, that is a great rebuild and and a good call using dry stacked bricks.
That  very bad degrading on the ceramic fibre board, I think Matt must be right as I have been using the same ceramic board components for years and it is still in working condition although probably not for much longer.
Anyway I wont be using any Ceramic fibre anymore as all the latest info points toward it being a very dangerous  material to play with especially when disturbing used material! The airborne fibers can lie around for years and even once settled can be air bone again if disturbed!

4” vortex rocket cook stove.
Hi Thomas, I am trying staying away from ceramic fibre products hence the use of vermiculite board.
The board I am using is rated to 1100c, I have used it many times before, it will show some spiderweb cracks after being super heated but seems to stay together for a long time.
The main issue is its lack of abrasion resistance however it will still last quite well if treated with respect.
I have coated all the exposed surfaces  with a water glass product that does give a little more protection.
On the plus side it is safe and easy to work with, it can be cut very accurately and fixed together with glue and screws.
Some guys have had their vortex stoves running for years at over 750c and the board is still going strong but I would not use it for a J tube fire box.
Having said that there are some very interesting Vitcas products that can be painted on to the board and they might work well for high abrasion areas.
It this case, the stove will not be used every day so I am not concerned about that aspect.
I did a little more today, I cut up a large cooker to get the ceramic glass out for the stove top, I made up the chimney exit and tried it in place….
show more
3 weeks ago
rocket mass heaters

4” vortex rocket cook stove.
I have just started to put together a 4” vortex stove, here are a few photos of the progress so far….

show more
3 weeks ago
rocket mass heaters
Rocket mass heater in basement with firebox feed above?
I am not quite sure if I understand your question, you want to have the fire upstairs and the mass downstairs or the want it all downstairs with some sort of  auto loading?

Glass on the bell.
To be honest the front glass  was only really installed as part of ongoing experiments  to see the effects of different riser heights and just how short a riser I can use without the flames leaping out of the top.
I have now replaced the glass with a opening door so we can roast marshmallows.
To answer you question, yes there would be a visible glow but only when the the fire is running full tilt and all the light were out.
Certainly the top glass would offer more of a glow but again only when the fire is roaring away,
I tend to feed small softwood sticks when a lot of heat is required and larger blocks of hardwood to maintain room temperature,
So for the most time, the glass top and front glass would not throw out much light.
That particular rocket stove has been further adapted and no longer has a glass top or front glass but retains the glass fire box.

Glass on the bell.
Well I have built a few different designs that include glass but if it is a J tubes style that you are interested in, I built this one….