Half of peach tree won't ripen.
I'm not at all an expert, hoping someone who is can weigh in, but it sounds to me like a grafting problem, where the side that won't ripen is probably from rootstock and the side that makes the ripening peaches is the grafted part. If that's the case, that part of the tree will probably always be like that. I know that this is a symptom of genetic mutation in other trees, but have never heard of it only being a part of a tree, so my guess is that the rootstock is growing there and effected.
show more
9 months ago
fruit trees

random question about video
I'm not totally familiar with the rules in Canada (I think you're from Canada), if they're different, but reaction videos are fine to make and you don't owe the original creator money, as long as it falls under fair use.

Now, fair use is a tricky thing, you have to fall into their specified set of rules, which basically means it has to be transformative in nature. You can't just play a video or movie with your face in the corner and call it a reaction. You have to have commentary, critique, parody, something that makes it 'new' content. It's also considered polite to give credit and put the links to the original in the description.

Now, whoever or whatever you're reacting to might not understand fair use themselves, especially if it's more like criticism.

Please, please, please, read YouTube's info on this first though. I am not sure, but I think reactions cannot be monetized, and can even get a channel completely demonetized if you do them often. I don't know if this applies outside of the United States, so please double check for your country and region, if applicable.

I'm not an expert, but I didn't want to leave you without an answer or a place to start double checking your specific needs.
show more
11 months ago
meaningless drivel

What is it.... the game! Post unknown objects to ID... and to stump others!
I'm pretty sure the man cup othing is an egg separator.
show more
1 year ago
recycling 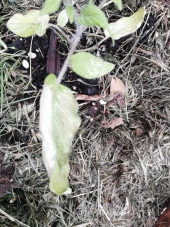 What happened? My tomatoes are dying, please help!
Did you acclimate them to being outside in the real sun first? It looks to me like sun damage on a tender plant. Since they're planted in the ground, I would provide some shade during the times when the sun is strongest. If it is sun damage, the plant will probably recover, but it will probably lose a lot of the really damaged leaves.

If it is acclimated to being outside, it's probably a pest or disease I'm not familiar with. I hope more people chime in!
show more
2 years ago
gardening for beginners

Embracing the Chaos of Self-Seeding Vegetables
I usually let volunteer plants do their thing. My garden usually starts out neat and slowly descends into chaos. Volunteer plants tend to be pretty easy to care for, so I normally let them stay.
show more
2 years ago
plants 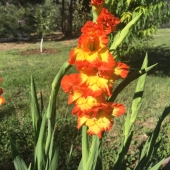 Is it spring yet!
Spring won't be here for a while yet. Those cosmos are a beautiful color! The glads are very lovely too, but I'm a sucker for pink flowers in the end.
show more
2 years ago
homestead

Easiest Vegetable to Grow
Summer squash was going to be my pick for easiest, but I have to hand pollinate it which led me to leave it off the list. I totally forgot about runner beans, I grow them every year for the hummingbirds and they always do well, even with a lot of neglect.
show more
2 years ago
gardening for beginners

Fruit Trees and Berries that Grow Best in Your Area Naturally- Continental Climate Hardiness Zone 3
Also zone 3 (Minnesota near the Canadian border), and pretty new to growing things like fruits and nuts. I have few established trees, with the exception of one very old apple that I believe is a Haralson and has been here since long before I was. It does phenomenally, even through horrible weather. I've never had a failed crop in zone 3b, regardless of weather.

I have other apples but none established enough to recommend yet. The same goes for plums and pears. And the Manchurian apricots.

Other fruits and nuts I grow include:
Hazelbrush (productive, but the squirrels love them)

Red raspberries (wild, and the cultivars Latham, Boyne, and Killarney)

Serviceberries (no known cultivar, but my wild ones have been selected for fruit quality)

Blueberries (wild and both low and high bush varieties like Northblue, Chippewa, Superior, and Northcountry)

Rhubarb (it's used as a fruit, so it gets included)

Chokecherries (and chokeberries, though I didn't currently have any)

Strawberries (I have Honeoye and Sparkle)

Gooseberry (unknown cultivars, but they are green/white and red)

That's all I can think of right now, especially this time of year. Other things I am growing but am unsure of their long-term survival are: autumn olive, pink popcorn blueberries, goji berries, black raspberries, and Siberian stone pine)

Other fruits that are in plans to try are mountain ash varieties Rabina and Shipova, Victory quince, elderberries, mulberries, lingonberry, bilberry, and grapes.

show more
2 years ago
fruit trees
Neighborhood "swap shack" - anyone tried something similar?
I really hate to be another cautionary person, but I want to mention to also check liability laws. If someone drops a jar and it cuts them badly enough to need stitchea, the last thing I want is for you to risk being sued.
I think this is a fantastic idea and I really do hope it works out if you try it!
show more
2 years ago
zero waste
Free Seeds from URI!
I'm curious as to the variety of seeds they send. Say, it you get 5 packets of tomatoes, what would you end up with? Would you get different varieties? Sizes? It's really not a lot of money to have them shipped, if you're not picky about the varieties.

Thanks for posting it, I'll mull it over for a few days. Please update the post with what you get once it arrives!
show more
2 years ago
small farm