I thought I had prepared - turns out I was a self-righteous prick.how covid whacked my perfect world

Kaarina Kreus wrote:I had some sweets but run out of them quickly. Warning to anyone planning to live without frequent visits to the shop: take the amount of chocolate you can maximally imagine consuming and multiply by ten.

No, actually twenty. Might as well add a buffer. OK, thirty.

I thought I was the only person who hoarded chocolate...

Nope, me too.  I consider it comfort food for the really hard times when comfort may be hard to find.
show more
18 hours ago
homestead
Personalities and Tree Bark
My baby brother one time said if he had to use one word to describe me, it would be "abrasive".  That's from someone I loved very much and that loved me, so I gotta think it's pretty accurate.  That said, I'm going with the Australian Ironbark tree.
show more
18 hours ago
meaningless drivel
Maybe humans didn't create terra preta soil fertility
A new study suggests that maybe human involvement had nothing to do with the creation of Amazonian Dark Earth (ADE) formation.  Pretty fascinating read suggesting that people in the Amazon may have taken advantage of the ADE soils without having actually created them.  Nature.com study article

From the article:  "The current view of ADE genesis suggests that the artefacts found in nutrient- and charcoal-rich Pretic horizons result from biomass burning and application to the soil. This view has fuelled an entire industry of charcoal production from biomass (i.e. biochar) in which ADEs are described as a model for sustainable agriculture20. Under experimental application, however, biochar alone (or in combination with fertilisers) has proved inadequate to replicate basic characteristics of indigenous ADEs, such as their long-lasting mineral fertility21,22,23. This reveals a lack of understanding that warrants further investigation into the genesis of ADEs."

"This hypothesis implies that pre-Columbian societies understood and exploited natural processes of landscape formation, which led to the unique properties of ADEs, but were not responsible for their genesis. Our findings do not preclude, however, a more recent human effect on the local environment. The wisdom of native populations, manifested for example in the well-documented recent application of waste materials to the soil, may well have further enriched ADE profiles or, at least, countered their otherwise-inevitable degradation."

I'm certain that more and more will be discovered about this topic in the future, and hopefully, aid us in re-creating these incredibly fertile soils.
show more
18 hours ago
biochar
Biochar as livestock feed supplement

Phil Stevens wrote:One other point I would add to the intentionality of making biochar is the production method, and specifically the pyrolysis temperature. Biochar is produced at temperatures between 400 and 750 degrees C. If the temperature is too low, the volatile hydrocarbons are not fully driven off. This is great for charcoal intended as fuel for heating and cooking, as it will be easier to light and produce more heat. But it sucks for biochar, because the pore structure will be poor to nonexistent (clogged up with tars), and much of the carbon content will remain in a form that degrades over time. Also, the graphene complexes that provide molecular attachment points for nutrient ions don't start forming until you get above 400 degrees.

If the treatment temperature gets higher than 750-800 degrees, the graphene structures start to fuse together and collapse into sheets, losing the attachment points around the edges. The micropores disappear as well, so this material won't provide the soil benefits of biochar...the aeration, water retention, and microbial habitat functionality is diminished or lost entirely.

This is a big part of why I have chosen to use the IBI terminology. I don't want to give the impression that you can take low-grade charcoal full of tars and gunk (or something at the other end of the scale that's practically graphite), soak it in compost tea or whatever, and suddenly have something that will do your soil a whole lot of good for the long haul...because it won't work. This is not to say that "accidental" biochar is worthless...most of it is good, because the temperatures reached in a wood fire are conveniently in the sweet spot for decent pyrolysis.

What do you think about success of Terra Preta?  Is it your contention that the ancient people that created it were able to make biochar that was formed at the temperatures needed?  My own thoughts are along the lines that people were burning garbage and burying it, and had no interest in what temperatures were used.  In doing so, they probably didn't make perfect charcoal with all the hydrocarbons burned off.  Still, 2500 years later, the soil is very fertile and is indeed what most of us are trying to recreate when incorporating biochar into our soil.

It may be that you are right about the "accidental" biochar as you called it, and it did happen fall into the sweet spot with regards to temperature.  I don't know what the "normal" temperature of say a campfire is.  400-750 is a pretty wide range, so maybe that is the temperatures they normally reached.

All in all, I find it a fascinating subject.  I don't mean to disparage the group that calls any charcoal destined for soil improvement "biochar".  My only interest in the terminology at all is that it sometimes lends confusion to the discussion if two different definitions are being used.  Anyone adding to the knowledge base regarding this helps us all.
show more
18 hours ago
biochar
Lime egg water went bad - thoughts?

John F Dean wrote:For what is it worth, I have tried this approach without successs. 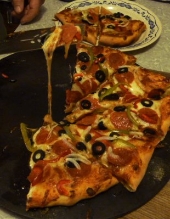 why is pizza considered junk food?
As others have alluded to, define "pizza".  I could just as well say cheeseburgers are junk food because I only get them from McDonalds.  When I make them at home, I use no bun, grass fed beef, cheese from the local cheese house, olives, fresh onion, and real ground mustard.  Viola, no longer junk food.
show more
1 day ago
meaningless drivel

I thought I had prepared - turns out I was a self-righteous prick.how covid whacked my perfect world

M Smythe wrote:Your biggest problem and mistake was living alone. Especially in a place like Scandinavia. I run a small farm and am the main worker. I took in some former friends turned into squatters that then tried to take over my farm last year. They broke into my house, and threatened my 76-year-old mother after beating me bloody in my backyard. They did it and dared to because they had 5 people vs. me and my old mother. Never again will I make the mistake of being too few. You need like-minded friends or family with you. Something can and will always happen. It could be covid or could get robbed or could be something as simple as no power and water and far from help and heat. You need another person who can be a trusted helping hand, especially in these dangerous times. I am telling you my personal experience because it is too easy to get killed now doing something stupid. I'm 41 and healthy, and people still thought they could try to kill me and take over. Be careful for god's sake. If not for real friends and fellow neighbors, I would have died on my own place.

I'm sorry you went through that, but the OP made it perfectly clear that she is very lonely and would like someone to share her life with, so I don't think it's fair to say that her "biggest problem and mistake was living alone".  Not everything is a choice, sometimes we live in the circumstances we are stuck with and do our best.
show more
1 day ago
homestead
Historical Root Cellars

If you scroll down on that article page, past the "Related papers" section the full text should be readable there without needing to log in or download.

It doesn't do that for me.  I tried two different browsers, chrome and edge.  Both force me to click either "continue reading" or "download Free PDF".  No matter which I click, it asks me to log in.

If I scroll down below the "Related papers", there is a box that says "Loading Preview" but nothing loads.  It may be because I am on my work network.
show more
1 day ago
root cellars

Walipini or underground greenhouse - actual experience
I researched this quite heavily and common consensus is that walipini work really well in areas near the equator, but not well at all in places further north, like here in Wisconsin.  The sun is very low in the sky here in the winter months and the sunken nature of walipini won't allow the sun to strike the growing bed.  I think a lot of people writing about walipini are simply guessing without having talked to anyone that has tried it.  Here is an excerpt from a webpage that I won't name.

"When you dig down even just four feet, the temperature changes dramatically. Frost lines generally are three to four deep, so a six to eight foot walipini is completely protected from frost. One walipini owner claims that his greenhouse keeps pretty steady 70 degree Fahrenheit or warmer temperatures when it’s 10 degrees outside. Because underground greenhouses are warmed by thermal mass on all sides, you really can’t lose any warmth compared to a traditional greenhouse."

This is decidedly silly.  A six to eight foot deep spot in the ground that is covered by six to eight feet of soil is completely protected by frost.  Once you remove all the soil, the ground in the hole is now protected by a single piece of plastic, and is in no way completely protected from frost.  Additionally, I would challenge anyone to build a greenhouse that doesn't have an actual heat source in the building that can maintain 70 degrees "or warmer" in 10 degree weather.  It just isn't going to happen.  It can't be done with heavily insulated greenhouses with heat batteries, how could it be done without any additional heat source?

The DWG (Deep Winter Greenhouse) developed by the University of Minnesota takes advantage of heavily insulated walls and a heat battery for use in these climates.  Cost is the major issue.  The DWG saves a lot of money on heating, but is still expensive to build.

I'm interested in the passive greenhouse being trialed by Paul and company but haven't purchased plans for it at this point.
show more
1 day ago
gardening for beginners