Zone 3 Orchard - Who Survived the Winter
I'm also in Manitoba (jsut south of Winnipeg, Z3), so I can tag on here:

Most everything I planted over the last two years survived the winter, but definitely some with winterkill, here's my list. All survived well unless noted:

PEARS - these had snow heaped on them up to 3-4' high. A few went above the snow line and had winter kill as noted.
So Sweet
Ussurian
Schroeder
Favoritka
Beedle
Flemish Beauty - may have taken winterkill above snowline, BUT i think what actually killed it was high standing water. Both it and Pattern leafed out fully, then died down to much lower on the trunk. I think its because our yard has been oversaturated due to spring flooding and nonstop rain.
Patten - same damage as flemish beauty

PEACHES
Contender on Krymsk 86 - Severe winterkill above snowline, only 1 branch leafed out that was under the snow.
Bailey seedling
Harrow Diamond on Bailey - Flowered and pushing fruit!!!

Saturn Doughnut  on Bailey - DEAD. failed to leaf out. Trunk passed the green-scratch test early in spring, but failed to develop any new buds and leaf out. Appears dead.

I'm looking for more peach seeds to try growing - if you have any to share, please let me know!!!

great recipes for surplus eggs
Ukrainian paska! Even when i half the recipe or needs like a dozen eggs! It makes ALOT of bread though!
show more
7 months ago
cooking

Siberian C peach
Links to the people/articles I mentioned:

Bernie is a total sweetheart who has been sharing tips on the NAFEX facebook group and elsewhere too.

Siberian C peach
had to revive a dead thread to give a shoutout here to fellow canadians who want to grow peaches. Check out Bernie Nickolai's posts about growing them 'siberian' style.
Tree Eater Farm and nursery will sell you Bailey Peach seedlings (some of the hardiest out there) and/or Seeds (if you ask nicely enough, and wait til they are in season).

I was able to overwinter a harrow diamond peach (bought from whiffletree) on bailey rootstock last year using this method.
Hopefully in a few years my peaches will be large enough to share some of my scions (ive got saturn doughnut, harrow diamond, and I think Contender growing now).

So yeah, I've got a few bushes growing under the snow! Im in Z3 and if my -38C last night (test winter!) didnt kill them under the snow i mounded entirely over them, and a late frost doesnt damage the buds like last year, I will hopefully have some peaches this summer to show you all!
show more
9 months ago
peaches 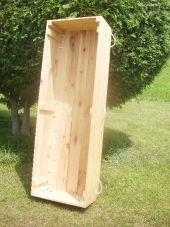 Pine Coffin pics and funeral planning info available
That is beautifully done. well made!
Good on you for taking the time to figure out your end of life plans. My hubby and I are working on ours too, as we want to donate our home to a charitable cause w hen we are gone.
show more
2 years ago
zero waste 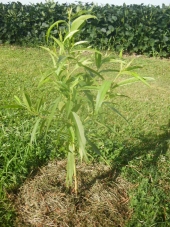 Advice on first time peach tree blooming
I know this is an old post...but im in MB Canada and would love to try to grow some seedlings from your peach tree!
if you read this, the reverse is my emailll.... I'd love to hear from you!