Set up a freshwater aquarium - PEA BB animal.sand.fresh
Since last posting, I've had the same adventures as you Aurora! All due to contaminated plants coming in.

There's many species of snails. I had a pond snail and a ramshorn snail come in with plants. These are hermaphrodites, meaning they can breed with themselves so you only need one for it to start laying eggs. I let the one pond snail live for a bit and when it got to adult size it laid 10 egg sacks (each containing 10s of eggs) in a couple weeks! The newly hatched snails are extremely small and invisible. I took out all the baby snails and all the egg sacks I could find, and fortunately that seems to have controlled them. Right now, I have two frogs and they are supposed to eat snail eggs so I have allowed one pond snail to live, but I'm keeping a close eye on the tank for egg sacks!!

Other snails come in one sex and need the opposite sex to breed. Mystery and apple snails are two of these types. I had two females and they never produced progeny. Also, they lay their eggs above the water line so they're easier to see, if I ever get a male. Apple snails come in many colors, they're big and fun to watch with their long antennae. 🙂🐌 There's also snail species that will eat other snails!

Pest snails (and blue green algae) coming in with plants is why it's recommended to put all new plants in a bleach solution before adding to a tank, to kill hitchhikers. IME snails eat a little algae but not enough to control it. Brown algae is eaten by snails and otocinchus, but not slimy blue green algae. It's tenacious. A little keeps reappearing on a rock in my tank. My tolerance for blue green algae is none, because it's toxic to aquarium life and it spreads very fast. I used the blackout method to knock back the algae, followed by a big water change. Then I applied hydrogen peroxide to spot treat the remaining bits. https://smartaquariumguide.com/blue-green-algae-cyanobacteria/

Due to pest snails and algae coming in with plants, I mostly only go to one aquarium shop that keeps their tanks super clean. They're also the only place in town that have otocinchus. They know what they're doing! I've never had a pest come in with their products.
show more
5 days ago
pea

Compost is Magic!!!
Not just the plant roots help to aerate the soil, but also fungal mycorrhizae, invertebrate action, and bacterial biofilms, especially if you're adding organic matter to decompose. 🙂

Even a sprinkling of compost I think would be adding more nutrients than spreading raw plant material as a mulch. My cubic yard compost pile has taken 2 years of filling it up to the top with raw materials until it is fully full without shrinking with decomposition. Probably added at least 6 cubic yards of raw materials over that time for that 1 cubic yard of finished compost.
show more
2 weeks ago
soil

Compost is Magic!!!
Yep, I've been top dressing with compost for the last few years and my veggies have grown much better, compared to previously when I did fertilizer and burying food waste. I cover the beds once a year with just enough compost to cover it, and don't dig it in. I use fully decomposed compost, not undecomposed materials, because I have lots of slugs and snails. My theory as to why it works better than burying food waste? It takes a lot of materials to make compost, so I think that the compost is much more concentrated than the food waste I was adding directly. I'm simply adding much more nutritious organic matter.

Digging doesn't hurt, but it doesn't really do anything either. Time, microbes, and invertebrate action will do the same thing. There's a guy in England who's been doing a trial of compost, same amount of compost in each, dug into some beds and top dressed on other beds, and they get the same yield (the undug bed may get slightly better yields but I doubt it's statistically significant). https://charlesdowding.co.uk/category/trials/ Save your back! 🙂
show more
2 weeks ago
soil 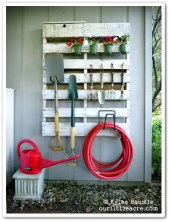 Where do you store your gardening tools?
Oo good use for a pallet! I have a pallet left over from my last project, this would be perfect!
show more
3 weeks ago
gear

Where do you store your gardening tools?
In a box on the front porch, in the back shed, in the garage, inside next to the back door, randomly left in the garden. We have multiples of everything.

how to reconcile car-free life with the desire for the rural / more land
I'm in a similar situation. Right now I'm living in a large city, but on a 5000 sqft "large" lot. I'm not entirely car free, but we walk the kids to school, I bike to work, we walk to the grocery store. My hubby and I both grew up in the suburbs and agreed we either wanted to move into the city so we could walk more, or out to the country where we could have land. We got the most veggie friendly lot in the city we could get as a compromise. I do prefer the more liberal diverse urban schools, particularly grateful in the last two years that they actually wore masks and increased air filtration, unlike many of the surrounding rural districts.

But my heart still yearns for more land for more growing area and animal area. I would like to move to the outskirts of a medium town (an outer suburb of Seattle), where I could get 4-5 acres and still be near our most used destinations: school, work, grocery store, hardware store. And stay near our extended family, which are mostly in the same city. Our kids are pretty entrenched in their schools and friends now, so I don't think we'll move until they both become adults, at the earliest (hubby has become less and less interested in rural self sufficiency, so we'll see).
show more
1 month ago
bicycle 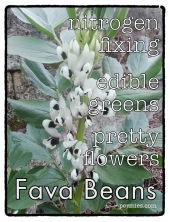 Cumba Siegler wrote:Hi, all,
Has anyone had the experience of having the fava flowers stripped off and eaten? It's hard to grow the beans if you don't have the flowers. Can't imagine which creature has done this.

We've had tons of rabbits and they love legumes, particularly the flowers.
show more
1 month ago
beans

Rita Marquez wrote:
Perilla? Is this the one that tastes like sesame seeds? Is it sesame plant? I don’t think I can find the seeds of it in the US.

Not the same thing. If you want to grow sesame, however, you can sow the seeds from the grocery store, just get raw, non-roasted ones. Sesame is annual.

Where do you get your perilla seeds? I thought perilla was the same thing as sesame because of the flavor. I bought a package at an Asian market and that was how it tasted to me.

Just from the same seed company I get other veggies seeds from. A lot of companies carry it. For instance, https://territorialseed.com/collections/types?q=perilla
show more
1 month ago
plants

Rita Marquez wrote:
Perilla? Is this the one that tastes like sesame seeds? Is it sesame plant? I don’t think I can find the seeds of it in the US.

Not the same thing. If you want to grow sesame, however, you can sow the seeds from the grocery store, just get raw, non-roasted ones. Sesame is annual.
show more
1 month ago
plants

Joe Grand wrote:Tell me if any of these are perennials: