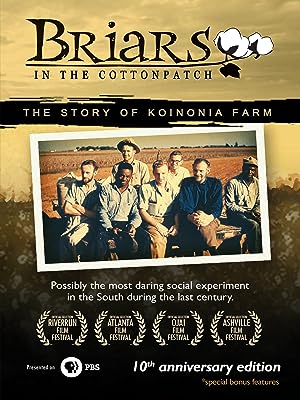 
Synopsis of “Briars in the Cotton Patch”

Briars in the Cotton Patch is a documentary film that explores the unknown story of Koinonia Farm, one of America’s most daring social experiments of the last century. Started in 1942, Koinonia Farm is a rural community in southwest Georgia where blacks and whites lived together, broke bread at the same table and got paid the same wages. Though founded on the principles of non-violence and sharing, this seemingly innocent philosophy once tore a community apart and inflamed passions for decades. Koinonia had to endure years of bombs, boycotts and shootings. Out of this chaos grew a batch of Koinonia “briars” whose lifestyles pricked America’s comfortable social culture. Koinonia also provided the environment from which grew the worldwide movement of Habitat for Humanity International.
Andrew Young, former Ambassador to the United Nations, Atlanta Mayor and Civil Rights veteran, lends his powerful voice as narrator of Briars in the Cotton Patch.
This gripping documentary tells the nearly forgotten story of this courageous group of blacks and whites who withstood searing hate and continual violence in the years leading up to the tumultuous Civil Rights era. See how Koinonia survived the battles of integration, changed the lives of generations to come, and planted the seeds for the global work of Habitat for Humanity International.
Briars in the Cotton Patch, a compelling chronicle of heroic humility and uncommon courage that echoes to the present day.

The complete film is available at through Netflix.