Weeds and What They Tell Us by Ehrenfried E Pfeiffer 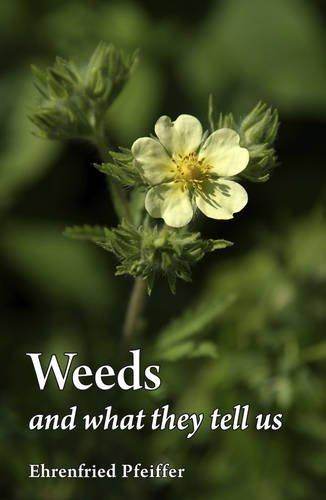 From Amazon: "This wonderful little book covers everything you need to know about the types of plants known as weeds. Ehrenfried Pfeiffer discusses the different varieties of weeds, how they grow and what they can tell us about soil health. The process of combating weeds is discussed in principle as well as in practice, so that it can be applied to any situation. First written in the 1950s, this is still one of the best overviews of the subject available."

What Weeds Tell You About Your Soil
What Weeds Tell Us About Soil
COMMENTS:
Miles Flansburg
pollinator
Posts: 4694
Location: Zones 2-4 Wyoming and 4-5 Colorado
474
3
I like...

I have had this little paperback since the 1970's. An excellent source of information to diagnose your soils. Also gives discriptions of the weeds with pictures,and subspecies of weeds.

The book has to be visioned under two points of view in my opinion. First the message it puts forward, second the analysis of a lot of plants from a different perspective, what they tell us and we can use them for.
I like to dedicate a few lines to the first aspect because it's important to know why today books like this one still have a strong grasp over those, like us on permies.com, that want to read the world in a new language. the book was written on the '50s and this is in the era of pesticides, when many were caught in the war on weeds and sided for the chemical industry, and the big machines that would have faught the war. those years saw two diverse worlds move in parallel, those that were at war with the weeds and those calm and stubborn partisans of a different reading of nature.
If we think about it in those years we have some strong images of this diversity, we have Ehrenfried E Pfeiffer, but even Ruth Stout, all strong people that put aside the mainstream thinking of those years and stood for a different v.iew
We can see this in the first phrase of the book: "Weeds are weeds only from our human egotistical point of view, because they grow where we do not want them" Imagine this sentence read in the 50's when people thought every rule, every possibility of life or death resided in mankinds hands.
I like to read books thinking of the message they set forward when they were written, and then how they were capable to keep their strength over decades.
This is one of them.
I brought it under suggestion of a friend, a good friend one that reads tons of books, and tries to learn from the past not because in the past all was done better, but because there was the capability to observe, maybe getting the wrong message but very big importance was put in observation. When I received it I started reading it avidly. It's really quite a quick read.
I live in Italy and even if it is written for the States it flies over the boundaries easily. The book has been translated in many languages and at least in the italian translation the publishers tried to use latin names so that the reader can be sure that a part from local names he knows what plant the author is speaking of. The author doesn't analyse the weeds under a botanical view, that can be actually done with other resourses, he instead divides weeds in families and tries to tell us a story of what these strong, sometimes venomous, mostly unobserved windswept weeds have to put up in their life cycle.
The chapter I liked a lot is the last one on dynamic plants. Yes I read it again while writing these lines. the authos gives a nice definition of what a dynamic plant is: dynamic plants are those that have a specific effect on all that surrounds them, so that plants and soil change their features. This influence is something more than just the competition between minerals, water and light.
And he describes the importance of nettles, stinging nettles and even false nettles. Has anyone tried what he writes? planting nettles close to tomatoes makes the tomatoes less prone to rotting.
This what a good book is, when the reader after finishing starts to look up more information on subjects he's read of, and tries to keep on following the path the last author he's read has traced. This is what Ehrenfried E Pfeiffer left to me, the curiosity to understand more.
There may be more recent studies, for sure there are, but I like to keep a section of classics and this is one of them.
I know the author is a big guy of biodynamic agriculture, I've just glimpsed into that world, actually a universe, I don't want to write of it specifically because this book has to be read anyway, if one follows or doesn't follow biodynamic agriculture.