Secret Garden of Survival: How to Grow a Camouflaged Food Forest by Rick Austin 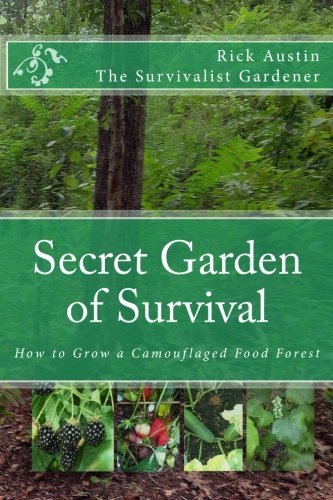 "Imagine a food garden that you only have to plant once in your life-time, that takes up very little space, that will provide food for you and your family for the next 30 years; that can grow five times more food per square foot than traditional or commercial gardening; and where you never have to weed, never have to use fertilizers and never have to use pesticide-- ever. All diguised as overgrown underbrush, so nobody knows you have food growing there! This book will show you how to do it in one growing season!"

From Rick (the author) Himself
Amazon.com
Amazon.ca
Amazon.co.uk

posted 4 years ago
I give this book 7 out of 10 acorns. It is very basic, which is great, especially considering it's audience of people who may/may not know anything about gardening, let alone permaculture. The book is just over 100 pages long, with each chapter only being a few pages long, and in an easy-to-read large font.

The graphics in the book are a little....lacking. They are very basic 3D shapes that bear little resemblance to what they are trying to resemble. They do, however, generally get the point across. I just think they could have been more helpful if they were a bit more accurate. I think handdrawn diagrams might have been better than these 3D shapes... Here's two of the graphics from the book that I scanned. 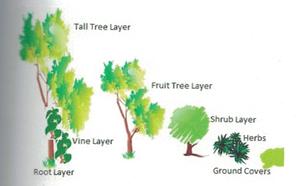 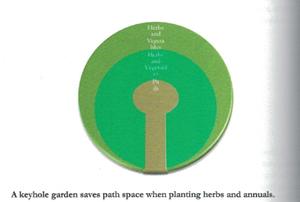 The full-color pictures were nice, and often rather helpful. But, they could have been improved a lot by inserting titles of the plants and other things featured and discussed in the picture. Those color pictures cost a lot--it makes sense to get one's money's worth out of the pictures by photoshopping in some titles.

There were a few times in this book in which I found myself saying, "Wait, that doesn't sound like a good idea." For example, Rick suggests a greywater system where water is filtered through a man-made wetland, which drains into a duck pond. This is all wonderful stuff! But, then he says to use that duck-poopy water directly on plants...without any mention of the dangers of salmonella or listeria. I really wish this had been discussed. As a duck-keeper with small children, I WISH someone had told me the dangers of bacteria from the poop on my food. Many places--this book is not the only one!--go on about how wonderful it is to use this water as a fertilizer. I had no idea that it could be dangerous, until over a year after I'd begun doing so. My two year old had eaten from those plants. My pregnant self had eaten from those plants. Thankfully, neither of us got sick. But, if we had and I had miscarried or gone into preterm labor due to eating that food, or had my son get hospitalized from it, it would have been very, very horrible. I would not want anyone else, either, to get sick form consuming plants watered by poopy water that had not aged long enough to kill the harmful bacteria.

Another moment where I was perplexed was when, on page 63, Rick states, "mustard is another nitrogen fixer" and on page 61, "buckwheat germinates in three days and is one of my all-time favorite nitrogen fixers." Neither of these plants are nitrogen-fixers.

The book gives a general overview of permaculture gardening. I like how the usual difficulty of harvesting from a permaculture garden (everything is spread out, so it's not as efficient, and a helper might not know where the food is located--my husband still can't figure out where some of our food is growing), is turned into an advantage. It's hard for people to take your food if they can't find it!

This book currently costs $29.99 on amazon. This is not a price I would pay for a small paperback book. $9.99 is a whole lot more reasonable price, in my mind (I won this book during a a giveaway here on permies.).

This book also does not have a list of references in the back, or places to look for more information other than his own websites. I think this is very sad. I like that this book is a very general, easy entry to permaculture and gives a person a framework to build upon. But, if someone wants to build upon that framework, they need more information than this book offers. Rick simply states for them to google for more information, or ask local gardeners. That's all well and good, but it wouldn't have been too hard for him to list some resources that he had gained his info from, so that people could do their own research. It would not take up much space to list books like Gaia's Garden or Farmer's Handbooks (the handbooks are FREE and full of excellent information) or even blog posts and articles on the internet, as places to get more information.

I think if someone has already found their way to permies, they probably don't need this book--a book like Gaia's Garden would be far more helpful. But, for a survivalist or a prepper who doesn't know about permaculture could gain a lot from this book. As that is Rick's intended audience, I give this book a 7 out of 10.