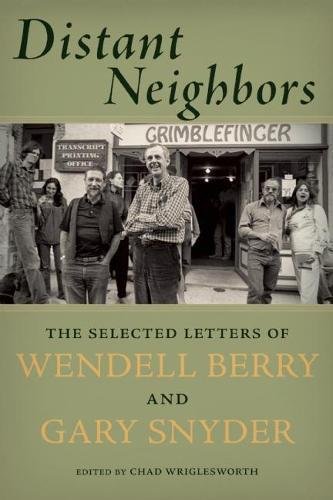 Summary
"In 1969 Gary Snyder returned from a long residence in Japan to northern California, to a homestead in the Sierra foothills where he intended to build a house and settle on the land with his wife and young sons. He had just published his first book of essays, Earth House Hold. A few years before, after a long absence, Wendell Berry left New York City to return to land near his grandfather’s farm in Port Royal, Kentucky, where he built a small studio and lived there with his wife as they restored an old house on their newly acquired homestead. In 1969 Berry had just published Long-Legged House. These two founding members of the counterculture and of the new environmental movement had yet to meet, but they knew each other’s work, and soon they began a correspondence. Neither man could have imagined the impact their work would have on American political and literary culture, nor could they have appreciated the impact they would have on one another." credit:amazon.com

Where to get it?
amazon.com
amazon.co.uk