Posts: 1
posted 11 years ago
We live in Maine and water from our well is extremely cold. We built a greenhouse/sunroom onto the house and want to use it to pre-warm water from the well before it goes into the hot water tank on a year-round basis but we are having a problem and need help figuring out the plumbing aspect.
The well pressure tank is located in the basement.  We have run a ¾” pvc pipe from the pressure tank to two 50 gallon hard molded plastic tanks located one floor above in the greenhouse/sunroom.  The tanks are plumbed to fill from the top and flow from one tank to the other.  The outflow is from the bottom of the tanks and is also plumbed to connect the two tanks so that water flows from both, back down through the floor through ¾” pvc and into the hotwater tank.
The concept is to feed room temperature water into the hot water heater inside of ice cold water to lessen the energy impact.
The original cold water intake to the hot water heater has a shut off valve so that we can switch from the well pressure tank to the sunroom holding tanks.  The cold water filling the tanks from the well is about 40psi. Upon first filling the tanks we discovered that we couldn’t get all of the air out of them so we drilled small holes in the top of the tanks that can be plugged.  As the water from the well pressure tank filled the holding tanks the holding tanks kept expanding and bulging – not shutting off as it does automatically when flowing directly into the hot water heater, even with the air release and the valve to the hot water heater being open (the valve from the well pressure tank to the hot water heater was closed).
The water flows out of the tanks under no pressure, just from gravity - there is no airlock in the lines. But the gravity feed isn’t under pressure so it won’t force the water from the hot water heater to the faucets throughout the house.
We understand that the holding tanks are not meant to be pressurized.  We got them from a boat builder who would have used them in a sport fishing boat to hold fresh water for use on the boat.  They are new and were going to be thrown away so we wanted to put them to better use than in a landfill.
We’ve considered cutting a hole in one of the tanks and putting in a float valve and also plumbing in a circulating pump on the outflow from the tanks, based upon the advice from the CR4 forum.  But we just wondered if anyone here has had a similar issue and has devised a method to make this work.
Any help is greatly appreciated. 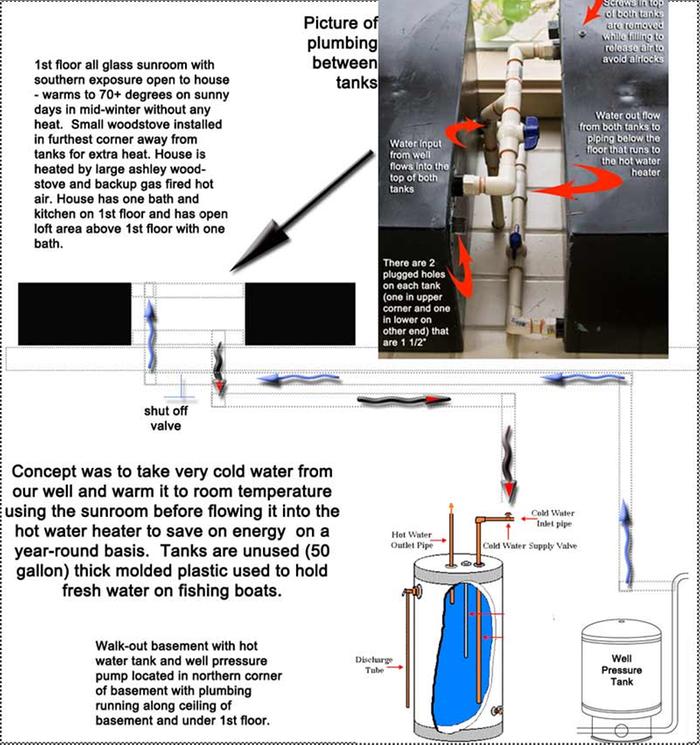 Your problem should be solved by drilling hole in top your collector tank and a pipe inserted , even with holes drilled above bottom edge. The purpose of this is that no air is trapped in tank but water will flow out the top of pipe.  The insert pipe has a floating ball (skinned tennis ball, or squash ball does the trick) at the bottom  of pipe. The purpose of this is the ball will only float up and close the outlet when tank is full. ( Any air trapped in tank will ensure well pressure pump will keep runnng)  The system will then opperate as originaly installed.  Peter 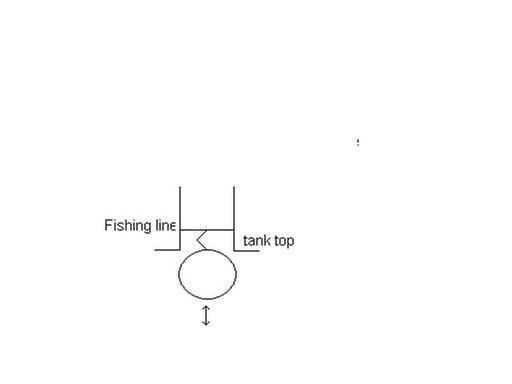 So, your scheme to have a second pump to pressurize the water leaving the tanks will work, it could be wired up to a pressure switch just like the one that trigger the pump to come on now.  Then your well pump can be triggered on and off by the (electrical) float switch.  This is problematic in several ways.  You have to provide a robust float valve set to trigger the filling of the tanks, and a means of dealing with the overflow if the float valve ever fails on the on/fill/pump cycle.  I would also put in a redundant (electrical) float switch, wired in series, so either switch can turn your well pump off when the tanks are full.  This may also cause your pump to cycle more which shortens life.

Another method is to have the pressure tank fill with cold water (just like "normal"), then have the pressure tank fill the tempering tanks, but now you can use a literal float valve, like in a toilet to turn the water on and off.  You still need the second water pump to pressuring the water leaving the tempering tanks and supplying your house.  This pump runs every time you turn a tap on, and is controlled by a pressure switch in the line between the pump and the house plumbing.


Alternatively, use these tanks to catch rainwater runoff for use in your garden, a non-pressurized use, and replace them with proper water tanks that can take the pressure.

If you talk to a plumber, it is not uncommon for people to switch their water heater from gas to electric and vice versa.  They might give you a couple for free over the next couple months.  Strip the insulation off, and there's your pressurized water tanks.  Much safer, neater and more elegant.  You don't need any extra pumps and wiring and float valves and overflow piping, redundant safety switches etc.

troy
Kevin O'Kane
Posts: 4
Location: Sydney
posted 9 years ago
One of my sons had a school project and it involved a mechanism similar to solar power pre-heating water. It was a project that challenged me a fair bit, but I enjoyed it a lot since I was doing it with my son. We build it from scratch and we discovered that it was not working properly due to a blocked drain. We had to re-do it again, and being an experienced water and gas plumber, we made it work.