What about dodder?? Yikes!

Raine Bradford
Posts: 53
Location: Washburn, Missouri
1
posted 9 years ago
Thanks to the permaculture approach, I have learned to relax about many weeds.  I put most of them to use somehow, or just ignore them if possible.  With one terrifying exception:  dodder.  This is that freakish orange spaghetti-looking stuff.  It is a parasite that germinates from seed, sending up a slippery twining tentacle that waves around in the air until it latches onto any nearby plant.  It then attaches itself to the plant, twining around it, growing like crazy, and sucking the life out of it.  It actually breaks itself off from its own root, surviving on the host plant only.  This stuff can spread like crazy and the seed is microscopic.  I noticed it covering about a half acre of some of my property last summer.  It was in an area that had been logged a few years ago... Does anybody know what to do about this stuff??
Saybian Morgan
gardener

Posts: 582
Location: Lower Mainland British Columbia Canada Zone 8a/ Manchester Jamaica
10
posted 9 years ago
Whoa that plants fierce, how can you stop it from touching another plant, it can suck from more than one at once. No roots, heavy bearing pea pods of seed, got to kill the host plant to kill the dodder. Only thing I know that can tackle that much accuracy of seed retrieval is a chicken. You'd loose the invested plant as swell, but that thing doesn't look like it want's to quit with seeds that will wait 10 years to germinate. You can hem a spreading patch in with tall grass, it wont grow on monocotyledon then put the chickens to it. Even if they don't eat the seed they'll bare soil it, the plant can only go a week or so before it has to latch on to something. Allot should germinate and die with all that scratching up to the surface.

Whatever you do Don't mulch with it.

Raine Bradford
Posts: 53
Location: Washburn, Missouri
1
posted 9 years ago
That all sounds like good advice. Thanx!!  I didn't know that it couldn't survive on monocots. Interesting. There's already a lot of grasses out there...I can't help but wonder if I just ignore it, will it just go away when the natural balance of things adjusts? It has been several years since this area was logged, but I cant even imagine what kind of upset logging causes to the existing plant communities. This weed just seems so freaky and weird...kinda reminds me of the movie "Alien". Ha!
Jordan Lowery
pollinator
Posts: 1528
Location: zone 7
18
posted 9 years ago
i like SaybianTv advice of planting non host plants and "Starving" it out.

Posts: 582
Location: Lower Mainland British Columbia Canada Zone 8a/ Manchester Jamaica
10
posted 9 years ago
One thing though, I don't advise on sitting back and letting nature take it's course, nature has timelines that our simple flesh will never see the beginning and end of.
Raine Bradford
Posts: 53
Location: Washburn, Missouri
1
posted 9 years ago
Well I suppose that's true.  I sure don't want to be 500 years old before things get back to normal.  I just wish there was some more information out there about how to deal with it without herbicides...or what to expect if I leave it alone.  Has ANYBODY else out there had experience with it???
Raine Bradford
Posts: 53
Location: Washburn, Missouri
1
posted 9 years ago
Here's a picture of it:
dodder22.JPG 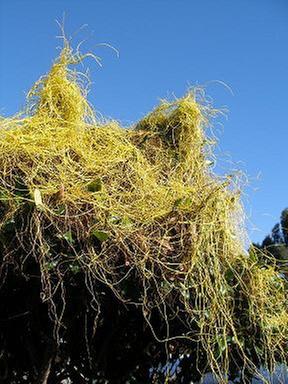 Posts: 582
Location: Lower Mainland British Columbia Canada Zone 8a/ Manchester Jamaica
10
posted 9 years ago
It's like wisteria with no leaves, I never suggested herbicides, looking at that beast I don't even think they would be effective.

Chickens scratching it up and potentially eating the seeds is a strong excuse to get some electric fencing and a portable hutch.
But as that may or may not be a tomorrow possibility, I can only see surrounding clumps with monocot's to choke it down before it finds it's next victim of vegetation.

You can't even slash it off a plant at the base like a vine because it's roots are already pruned as it latches and leaches on, but after defoliating winter it does have to head back to the ground. Being an annual or perennial is irrelevant if it's source of life is from chlorophilic plants. If you mulch it down hard that also set's back it's capacity to reach out for a neighbor before it depletes it's energy stores. If it wasn't for it's zombie like capacities it looks like a good mulch, but you can't trust something that already looks dead.
Raine Bradford
Posts: 53
Location: Washburn, Missouri
1
posted 9 years ago
Hahaha!  No kidding!  I think it's only potential is inspiration for a horror movie!
Kellic kelwen
Posts: 27
Location: Northwestern Ohio, US
posted 9 years ago
Dodder is a type of parasitic morning glory that I usually find strangling the life out of every plant along the lake park near where I live. It really loves moist soil so why don't you try to discourage moisture by creating drainage around areas that you see a lot of dodder growing?

"All this worldly wisdom was once the unamiable heresy of some wise man." Henry David Thoreau