It's that time of year again, have the pruning tools out and the possibilities for future grafts rolling around in my head, but one particular tree has had me flip-flopping on possibilities for a while now and I'd like to finally make some use of it this year.

This seedling tree was found growing on our property (old pasture) when we moved here in the summer of 2015. The pasture was owned by our neighbours who confirmed that it was not planted and so it must have taken root in our heavy clay soil on it's own. I opted to move the tree in order to save it as our soil is heavy clay and I didn't want to waste a locally-adapted potential rootstock.

From summer 2015 until early spring 2018 I let the tree recover and observed it. The tree appeared to be vigorous and other than being prone to suckering an burr knot formation I didn't see any susceptibility to disease so I tried a double cleft graft with some Kingston Black that were admittedly looking a bit worse for wear. Not surprisingly, neither of the grafts took, so now I'm back in the same position as last year. I'm sourcing some Honeycrisp scionwood and intend to cut the trunk below the branches and try for a triple or quadruple bark graft; depending on what looks reasonable with the scionwood that I can get. I want to create a low (read: easy to climb for kids) and open tree to make some use of this part of my front yard.

So... I'd like to hear from anyone that has an opinion on my plans; however, the scionwood selection is written in stone! I have read that leaving one rootstock branch in place for the first part of the spring until the scions take can be a good practice so I would be particularly interested in hearing from folks about that.
at.jpg 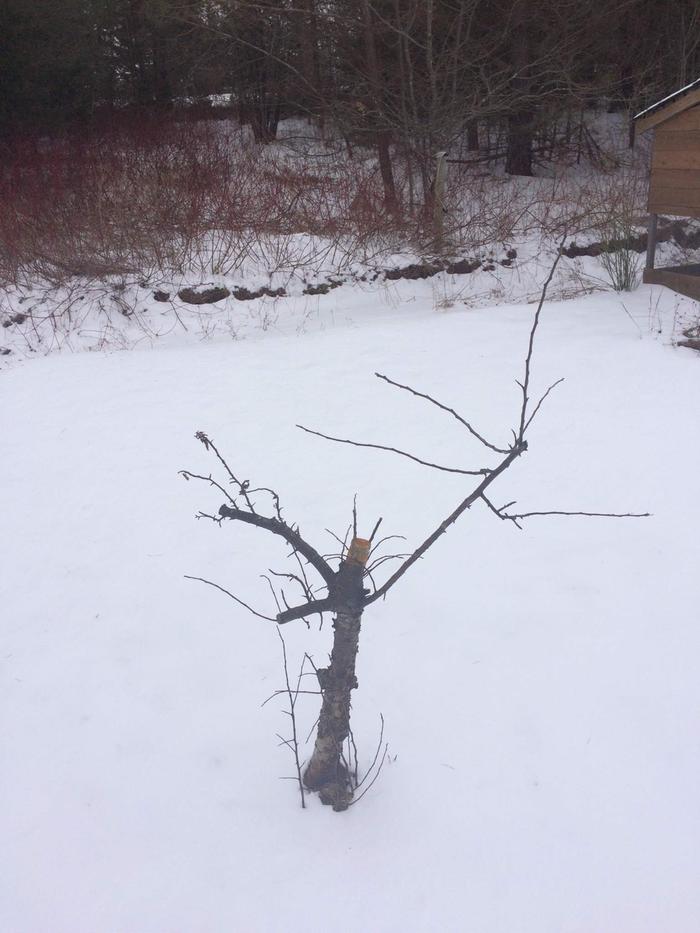