posted 11 years ago
I notice that some breeds are in significant demand as future breeding stock, and are worth a good deal of money just on the sale of the animal.
This seems pretty true for several breeds where the price for the live animal would be quite high for a living critter, maybe more than it is worth as a steak.

Anybody making money the old fashioned way by selling rare breed livestock? What examples can you give?

Posts: 7926
Location: Currently in Lake Stevens, WA. Home in Spokane
338
posted 11 years ago
I know a guy doing this with hogs.  He is essentially getting "finished hog" prices for weaners without the time/trouble/expense of raising them to butcher weight.

The 'downside' is that you need to maintain some 400+ pound hogs year round.  It takes a lot of feed to keep a breeding group going all winter.

posted 11 years ago
Hey John, that is an awesome example indeed.
I suspect that you can keep a handful of hogs through the winter (as long as you have sufficient forage and it isn't too cold)

Now if we could do this with 200 pounders

that would be ideal!

Posts: 7926
Location: Currently in Lake Stevens, WA. Home in Spokane
338
posted 11 years ago
Yeah.  Those breeding sows and boars can just keep on growing.  As long as a sow is spitting out good piglets, you don't want to send her to the sausage factory.

Posts: 2482
Location: FL
127
posted 11 years ago
I keep a Lowline Black Angus bull in the back field.  I'm looking for a girlfriend for him.  The calves sell for a grand.  2 calves pay for the girlfriend.  Retail value for the bull is around $1800.  You can do your homework on the breed with google.  The features that stands out with this breed: docile, naturally polled, excellent birth survivability, develop marbled beef on pasture alone, high carcass yield, and one of the highest rates of meat production per acre of land.  For the smallholder, this breed requires little land.  Bull has access to 2.5 acres and there is plenty of room for a couple of cows.  The cows will produce about 1.5 gallons of milk/day-enough that it will provide for the needs of a family without overwhelming the farmer with milk.  The bull is a few inches shorter than my belt, tips the scales at 1100 pounds.  He will dress out to 750 pounds of Black Angus beef.  He likes to be scratched behind the ears.

I sometimes work with a fellow from Alabama who raises Kiko Goats.
His website: TNB Kiko Goats
His goats are fully documented, he raises them as breeding stock and receives top dollar.  Kiko goats are a top breed for meat production, sort of like the Black Angus of the goat world. 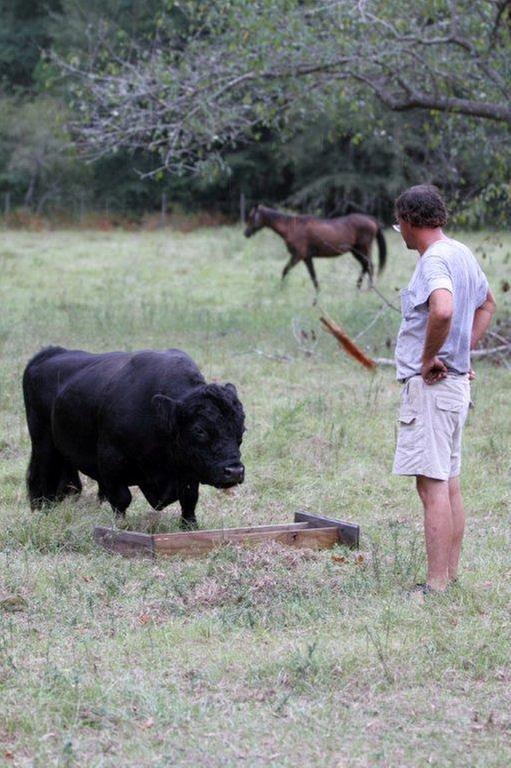 At 1100 he will dress out to 750? That's terrific. How old is this bad boy (nice picture), and what was his weight at @2 years? There are records for the breed that verify that ratio? Thanks.

Posts: 2482
Location: FL
127
posted 11 years ago
With a good butcher, the lowlines can achieve a carcass yield of 76%.  Much of the reason for the extreme yield is their short legs and massive upper bodies.  There is not much meat on the legs, and he hardly has legs anyway.  Bull was about 4 years old when the photo was taken, just a couple months after he made his home here.  He is fully grown.  I got him from a fellow who's wife determined that he had to go.  Because of the immediacy of the sale I have no records of his growth or documentation to support his status as a full blooded lowline.  Even without the documentation, he reflects every aspect of the breed.  I dont have a resource to direct you to, but at 2 years, 700-1000 pounds is about right.

At 2 years, this breed would have just a little bit of growing left to do.  I understand 2 years is about the right time to harvest.  When full grown, the bulls will weigh 900-1300 pounds, cows are about 60-75% of that.

I paid $500 for him.  A local abbatoir will cost me 60¢/# to cut and wrap.  He's now 5 years old and starting to get tough as a steak.  $1100 for 700 pounds of ground beef is a pretty good price, but Bull here is for breeding rather than eating.  He's got 8-10 years of Peace and Love ahead of him.  Truth be told, I bought him out of a need to mow the back field.  He was cheaper than a lawn mower, needs no fuel or oil change, and fertilizes on a regular basis.

Another useful aspect of this breed is siring a full size cow, first timer.  The calves will be smaller, making it easier on the mother and greatly increasing survivability and reducing problems.  I asked bull if he was interested in such a career, he huffed.  I took it as a YES.

Bred within the breed, the calves are born at around 45 pounds.  They will be lower than your knee.  Cutest little fellers you ever saw.  Take one to the fair, they are excellent babe magnets.

The guy I got Bull from (Bill) showed me a photo of the bull on his phone before I took him.  Sitting on the back of the bull was Bill's grandson.  They are docile.

Richard Hasting wrote:
Hey John, that is an awesome example indeed.
I suspect that you can keep a handful of hogs through the winter (as long as you have sufficient forage and it isn't too cold)

Now if we could do this with 200 pounders

that would be ideal!

Guinea Hogs are an awsome landrace breed that has high disease and parasite resistance, great forageing skills and best of all most stay somewhere under 250 pounds! That would save you big money on overwintering breeders for a breed that sells for upwards of 200 dollars. I am going to buy some as soon as I have the infastructure to manage pigs, I hear they (pigs in general) can be very destructive and hard to keep confined.
Tyler Ludens
pollinator
Posts: 11846
Location: Central Texas USA Latitude 30 Zone 8
1200
I like...

posted 11 years ago
That is one amazing little bull, Ken!

I raised Royal Palm Turkeys, the smallest breed of Turkey.  They take a long time to mature and I failed by having inadequate housing which allowed various varmints and snakes to eat the babies and for most of the hens to wander off and get eaten by varmints. I  only have 2 turkeys left, a hen and a tom.  I think Turkeys are more difficult to raise than chickens, because they are less good about laying their eggs in the coop, they prefer to sneak off and start a stealth nest somewhere.  I would like to try again when I have built a proper yard for them, where they can't sneak away and get eaten.

I also have Jacob Sheep but we had to put our ram down because he was dangerous (knocking me down repeatedly) so we aren't having any more lambs. 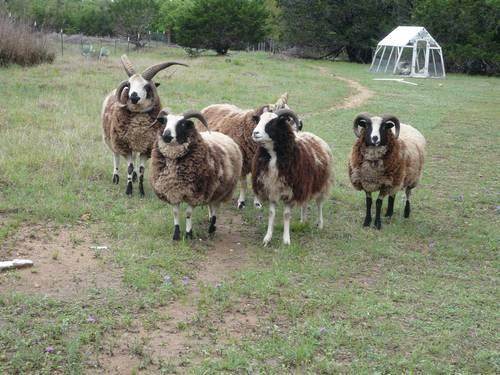