Rob Meyer
Posts: 103
posted 9 years ago
Hey everyone, I thought I'd ask a few questions, and perhaps use this as an opportunity to make a comprehensive thread for anyone asking questions on this subject.

I started a worm bin earlier in the year, and by now, I have about 3 cubic feet of vermicompost to use so far, thanks to my new little friends. I recently noticed they've been climbing up the walls. Not in massive numbers, but maybe 4 or 5 at a time. I'm wondering if this could have anything to do with the fact that I left the bin out in the cold for about a week. They survived it ok, but the bedding they have is now pretty constantly chilly, even though I brought it inside. I've added a heater, so hopefully that will heat them up again, but do you think the chill could be cause of their attempted escapes? I've been feeding them pretty frequently, but not as much as usual. Could my decrease in feeding be another cause?

My next question is regarding these little white bugs that have been crawling around in the bin. I added some soil from outside, which was very rich and apparently full of life, and now there are tons of white critters crawling around. Could these be detrimental to the worms, and another cause of their migration? Are they beneficial and nothing to worry about? They seem to be detritivores, as they've been thriving and dying off based on how much food scraps I put in. Although, they may be worm or bacteriavores, since those also rise with the food scrap amounts.

Thanks in advance for any advice you can provide.
M.K. Dorje
Posts: 153
Location: Orgyen
1
posted 9 years ago
Although I'm not an expert on this subject, I was wondering if you could please describe the white bugs in greater detail, so that someone here might be able to ID them for you. A photo of the critters might be helpful, too.
Lolly Knowles
Posts: 159
posted 9 years ago
Rob, are you draining off the compost tea? When the worms try to escape when I lift the lid, there has always been at least two liters of liquid to remove from my bottom tote.
Kota Dubois
Posts: 171
4
posted 9 years ago
I've been vermicomposting for over 5 years. In the beginning I did it in a small bin, with bedding, holes for air etc.. to the letter of the law. The following picture is my set-up now which I've been using for at least 3 years now with no problems at all.

The bin is about a meter long, a half meter wide, and two thirds of a meter high. I've tipped it up on one end so the leachage can drain out through holes that were drilled at the low end. You can see the basin which collects it. This is NOT compost tea and has killed every plant I ever used it on (diluted of course), so I pour it down the drain now, but I've read that it can be used to jump start a regular outside compost pile.

You will notice that I've divided the bin into 2 parts, one for fresh matter the other for continued consumption until the fresh side is filled to the brim. Then I empty the finished worm castings onto the screen over the bin in the background and sift them through it. Sometimes I use it moist, but mostly I let it dry for ease of use and transport. The empty side becomes the new dumping zone. I switch sides 2 or 3 times a year.

You will notice I don't have any bedding. So where do the worms lay their egg cocoons? Do you see all the specks on the side of the bin? That's them. With the lid on the bin the humidity is high enough for the worms to climb the sides and even the underside of the lid and do what comes naturally. Worms leaving the compost is very normal. They never (ok, rarely) leave the bin.

I've never seen the types of bugs you are describing but I doubt they would bother the worms if the bugs are mainly on the surface. Usually once a year I get a fruit fly infestation which I deal with by using one of those (mea culpa) hanging fly insecticide strips. You can see the white handle of it hanging on the side of the bin. A little expensive, but it saves a lot of time and misery.

Honestly there is never an odor (good or bad) that comes from my set-up. I don't garden where I live, and there I just chop and drop so I don't have a regular compost pile anymore. But for the city I have to say "vive la vermiculture" 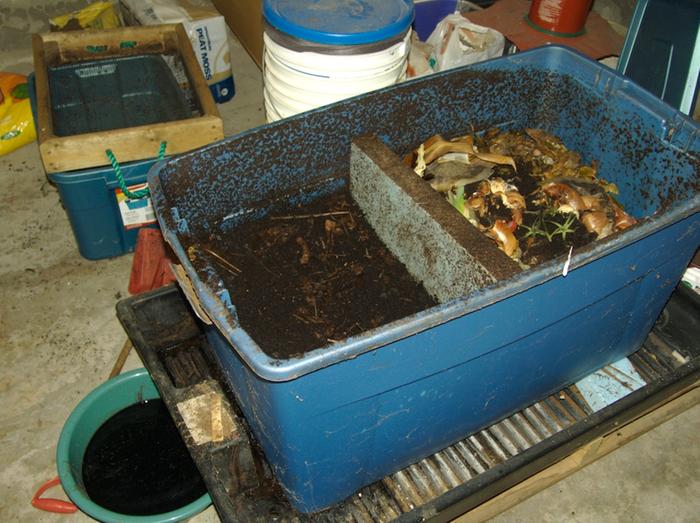