RIR getting over 5 ft fence

Rob Sigg
Posts: 715
Location: PA-Zone 6
posted 8 years ago
Ive got sneaky RIR that keep getting by a 5' fence. Ive clipped their wings and gave them extra feed they keep heading to the woods to dig! Can they possibly be still flying? How do I keep them from flying out. I only clipped one wing and Ive not had major consistent problems until this past week. Any ideas?

posted 8 years ago
It's a learned behavior. I kept chickens behind a 2' chicken wire fence for several generations/years.
Then a new spring bunch came along and due to weather I put them in with the flock about two months
earlier than usual. Well these lighter birds learned to perch on that floppy fence, and now that they are
older they sometimes fly completely over, and/or exploit other weaknesses in the fence.

So I'm trying taping their wings closed, both wings. So far each time we un-tape they go back to their
learned bad behavior. They are putting on more weight and it's only a couple I really have to keep taped
now. I've increased my fencing to 3' now, and I have a secondary fence around the area, so it's not a
big deal just a pain really.

This next spring I won't be putting young birds in the fence area to learn how to get out while they are light.
Once they have some weight on them they just don't try the things they will otherwise.

For now you can tape their wings closed. With 5' of fence that should be the end of that. And plan for
blocking this skill out of any new arrivals minds. Another thing you can do is increase your fencing to 10'
by stacking a second layer on top of your first - leave it any time you have birds younger than 6 months.
When they are all full size take off the second layer. You can still get an accidental fly out do to hen pecking
but if they didn't learn it they won't repeat it on their own. So no worries.

Rob Sigg
Posts: 715
Location: PA-Zone 6
posted 8 years ago
Thanks Jamie, thats very helpful. Probably some of the most specific experienced advice I have seen! Just wondering how you go about taping wings? Is there a link to good info on this?

Posts: 2482
Location: FL
110
posted 8 years ago
I put up 5' fence around the garden. Sure enough, Rusty got over it. Rusty is my RIR rooster: big, strong, and 2nd to Mr Handsome, the Alpha male. It would appear the RIRs are excellent jumpers. Clipping wings can help, but they only need a good flap to give them a boost.

Time to add a couple of feet of chicken wire to the top of the fence.

Rob Sigg
Posts: 715
Location: PA-Zone 6
posted 8 years ago
Im not sure how I can add to my fence. It is the mobile fencing from premeire, non electrified. I think I like the idea of weighing them down somehow with a leg bracelet or taping their wings.

Posts: 2482
Location: FL
110
posted 8 years ago
Posts can be extended-add a stick/branch/pole/broomstick by securing it with string/rope/wire
the top can then serve as an anchor for attaching chicken wire. There is a plastic fence material that could do the job. Lightweight, usually bright orange, but I know not what it is called.

Rob S. aka Blitz wrote:Thanks Jamie, thats very helpful. Probably some of the most specific experienced advice I have seen! Just wondering how you go about taping wings? Is there a link to good info on this?

Sorry Rod, been out shopping - tis the season and all that....

Anyway, no link or video, I came up with it just this season after running into this very 'new to me' problem.

I just hold a wing together/closed and use a piece of duck tape (they say it's good for everything) cut length wise so it's half as wide.
And I run the piece around the main part of the wing until it comes back on it's self. As the wings/feathers grow the tape can come off, but not when stuck to it's self.
If I need it off I just cut several places between the feathers and let it ware off of gently pull it off. I tried string, masking tape, light rope, etc. but only duck tape would stay.

Rob Sigg
Posts: 715
Location: PA-Zone 6
posted 8 years ago
Sorry Jami but Im having a hard time visualizing what you are doing, can you do a sketch or something?

Ken, that wont work too well since its 100 ft of fencing and I move it often as a grazing paddock.

Posts: 2482
Location: FL
110
posted 8 years ago
I'm wondering about adding weights to the legs of the roosters.
Would that help them build muscle mass? Bigger drumsticks? Has this been investigated?

Here's an idea used on top of a power plant near Tampa. To deter birds landing on sensors and equipment, on top of this gear is mounted a wire rig. About a dozen pieces of wire with little bright balls on the end extend upwards about a foot and a half from a central hub. The length and ball provide enough mass to cause the wires to lean over. They move with the wind. The little balls are colored, presumably to add a visual deterrent. The wire is too thin to serve as a perch, but stiff enough that they cant tangle in wings.

If you connected some clip wire at regular intervals, say 12-18 inches, it might keep your birds off the top-they cant jump through it with their wings outstretched. Bend it to overhang into the chicken run. Add something to the end so they dont get poked-maybe twist something into the rolled up end. Foil, bottle caps, shredded walmart bags. 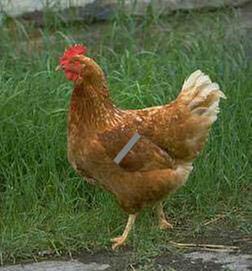 posted 8 years ago
I want to add that my second fence is the backyard fence, 6' of chain link.

I wouldn't attempt 'short fencing' without a secondary fence line, and if out in the country I'd add a dog to patrol that second fence area.

I've really played around with ducks, chickens and how little fencing can I get away with in my backyard

I believe in what Ken was saying about moving fence, the floppier the better.
Rob Sigg
Posts: 715
Location: PA-Zone 6
posted 8 years ago
Thanks for the pic, Ill give that a try. That doesnt harbor disease/parasites does it since they cant clean under it? I had thought about putting little shot pellets into a duct tape pouch of sorts and then "taping" it around their leg too so they would get weighed down, but then I thought that Ken had a good point. Maybe I would only be making their legs stronger for the future=higher jumping!!!

posted 8 years ago
I will say that my animals are much healthier than typical specimens, and I have never had mites or other parasite problems.

This time of year (cold) I don't think germs are moving very fast, so there again I don't worry about the type. By the time things warm up these guys will all be to plump to need taping, but if you have smaller birds then of course things would be different. I'd say try it, keep a watch and see.... we always have to watch over things we try anyway.

Another option is domination (oooh this sounds so kinky) - every time you go into their area tap firmly on the backs of the most aggressive birds to the point that they squat down (establishing your dominance in the pecking order - your pecking your way to the top). Be faithful in your training, do not let any bird walk around you, they should all kind of cow-down. When a bird gets out - corner it, peck it until it is squatting and then make it walk back into the area. Do this right and they will learn that the boss chicken doesn't want them flying out....
Burra Maluca
Mother Tree

posted 8 years ago
I have one black hen who will fly over anything. She's also the only one that goes broody, so I want to raise lots of her babies to get a broody strain of hens that raise their own chicks. The only problem is that we put a load of her eggs in the incubator and ended up with a whole load of escape artist chicks that kept flying out of their broody-box in the spare bedrom and pooping everywhere. Not only that, the whole batch seem to be boys, so we won't even get any broody hens out of them!

Rob Sigg
Posts: 715
Location: PA-Zone 6
posted 8 years ago
Thanks Jami I did try this today. They werent too happy and spent their time initially pecking at the tape. Indie squats almost always when I come up to her, and 2 others do sometimes. There is one that was sick earlier in the year and I dont know if she is even laying yet, she is the only one that doesnt squat when I come up to her.

Ill keep an eye on things and again thanks for your help.

Walter Jeffries
Posts: 1114
Location: Mountains of Vermont, USDA Zone 3
63
posted 8 years ago
Clip the flight feathers of one wing. Best done starting at an early age and then they don't learn about flying.

Rob Sigg
Posts: 715
Location: PA-Zone 6
posted 8 years ago
Yeah I cut them when they were 6 months old, I will have to start sooner next time. the problem is that by the time I bought them they were already old enough and they experienced some flight.

posted 8 years ago
Your right about cutting their wings early on. I've just never been good at staying on top of this, so I've used other means to prevent escape learning skills

Mostly just keeping them out of a short fence area until they have put weight on, usually 6mo + has worked great.

I have chicken wire around the kids 18' trampoline, with a door, and usually raise up the spring chicks under that. I move it around the lawn, and we let them out when we are in the yard. I call it tramp-tractor.

When the weather starts to turn, and they are of size, in with the others they go. Allowing them to gain size helps with the integration with the older birds too.