I've gotten to the point of planting my garden and frantically growing seedlings and now keep finding myself moving my garden around on an almost daily basis; dealing with information overload and drowning in charts and graphs and hoping you chaps wouldn't mind telling me if i'm missing anything or giving me some basic advice (as you have numerous times before) I live in the centre of England and have a small (small small small - approximately 17ft Long (5.2m) and 12ft (3.66m) Wide.) garden i'm hoping to treat as a way of supplementing my diet with herbs and fruits I wouldn't normally buy (unfortunately its hardly big enough to survive from) so i'm wondering how wise my choices are so far, i've attached a little plan of my garden and denoted different areas.

1) Paved Area; Small area with a table and chairs and a few pots of my more delicate or invasive plants; French Tarragon, Basil and Mint along with a Morello Cherry tree (a mistaken buy in retrospect but it is beautiful and a hit with the birds).

2) Bin Storage; Small storage area containing my black bin and my fold-down bike; planning on hanging pots on the fence however perhaps containing a wider selection of my delicate and invasive herbs such as a wider variety of mint and another tarragon.

3) Southern Entry Fence; This is perhaps the most tricky area of my garden to find plants for. This area is directly onto my neighbours fence, the fence is approximately 6 ft tall and is owed by my neighbour (therefore I can't attach anything to this fence) and as it is in the lea of my house it is generally shady until the early evening. Originally had my redcurrants living in that area quite happily however this presents a problem of privacy; if ever the fence is removed (which my neighbours may well decide) when the currants lose their leaves i'll be looking directly onto them as my kitchen window faces onto this patch of land. My plan was to erect some free-standing trellis and train the currants to grow up the trellis. I have been somewhat disappointing with my currants, the redcurrant 'Red Lake' are beautiful little bushes that look wonderful whereas I find the blackcurrants look a bit drab and droopy; the blackcurrants also suffered badly with an aphid infestation so I was considering planting rosemary bushes in front of the currants to attract pollinating insects and also to scare off aphids which I understand rosemary is rather good for? Alternatively I considered planting my oregano, marjoram and hyssop in this area as to my understanding these are somewhat shade tolerant and aphid repellent.

4) Northern Entry Fence; This area gets a good amount of sunlight but, being the neighbours fence, I am considering a similiar strategy as planned for the southern part of this fence; rosemary bushes (I am looking at one or two different varieties such as 'Spice Island' and 'Tuscan Blue' but I am a bit worried about the effectiveness of these as a long term fence. Behind these I am interested in training blackcurrants on a trellis as they seem to be less tolerant of shade than redcurrants.

5) Southern Entry Garden; This is directly next to my seating area and also contains a birdbath; planning on a mix of sages (though can't find many attractive culinary varieties, though a garden frog seems to love my generic sage) Lavender, Sorrel, Shiso and Bee Balm so that as you enter the garden you'll get a bright dash of colours and smells along with the rosemary and other herbs complimenting each other as companion plants.

6) Southern Fence Garden; I'm cultivating some unusual heirloom brassica; some East Friesian Palm Kales and some Tree Cabbages; as these are not so touchy about shade i'm thinking of planting them quite thickly around here. I'm a little bit worried about slugs and general brassica pests so i'm planting hyssop along with some thyme in the hopes that this might slightly negate that.

7) Northern Entry Garden; This is a bit of a mixed bag in general; so far my plans are to plant a thicket of loveage and my mediterranean saltbushes to soak up the sun and to provide a draw to potential pollinators from the allotments to the rear of the garden. Surrounding these will be chives and onions interspersed with thyme plants of various sorts.

Northern Fence Garden; This area is occupied by a stone bench i'm hoping to spend some time in so i'm looking at some privacy and serenity so I imagine i'll dot some of my palm kales along with chives (which I happen to think smell heavenly) and thyme.

So i'm left with certain questions; are there any plants i'm really missing? Just what should I grow on the fence I own? I was very tempted by Potato Beans (Apios americana) as its beautiful and perennial; ideally everything in my garden would be usable all year round and there would be enough redundency in the amount of plants i'm planting that I could, for instance, have access to rosemary whenever I needed without damaging the plant but I appreciate in a garden of my size that isn't entirely possible. 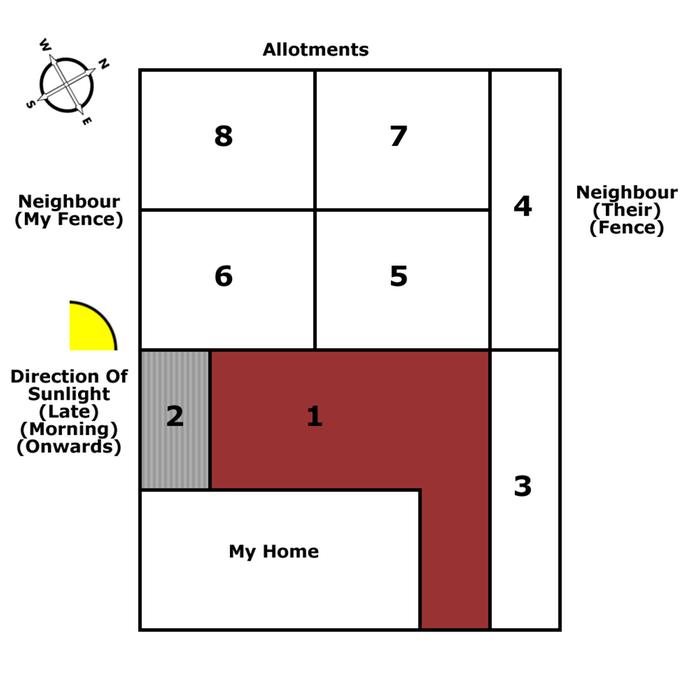 posted 1 year ago
I think you've done a fine job planning your garden. If I can offer something I've learned from my years of gardening, I think plans are good, but can only do so much. It's nearly impossible to plan, and then plant the perfect garden, because they are living systems and there are too many variables. My suggestion is to take your plan, and go for it! Each year you'll likely learn what grows good in some spots, and not so well in others, and moving things around and trying new things each growing season. I think that after five years, perennials that are happy will be very evident by their lush growth and beauty and annual herbs will be in their respective best spots after learning where they don't grow well. Hope this helps

M D Scott
Posts: 70
1
posted 1 year ago
Thanks for the nice reply thats very kind of you! I'm just cultivating a mass of seedlings at present so hopefully in the early new year when i'm planting things up I can finally get some photos of my garden up.
Steve Green
Posts: 4
posted 1 year ago
I think you've done a good job with your plan. The only suggestion I'd make would be to take the sunniest spot and chuck a tomato plant or maybe two in.