Johnmark Hatfield
Posts: 70
4
posted 3 years ago
So I have thoughts of a passive solar system, but I have some ideas that might be worthless, and some bad. I've read a serpentine system of the pipe inside the glass with 1/2" copper is a bad idea? Does that make air bubbles more common? Would a bleeder like the one below be of use?

I have ideas of the tank having sand/clay cob surrounding it in nesting tank sizes to hold thermal mass, but perhaps that would take heat off. Also, would a wall of bricks underneath the heat element be beneficial to hold mass and continue circulation past sundown?

The heat element will be 1/2" copper on a copper sheet, painted black, underneath tempered glass, and all on a backing of bricks (if advantageous)

I'm thinking a day's dishes would be done after lunch, and an occasional shower would be after a work day, but not after sundown.

The drawing doesn't have a frame support obviously, and I have imagined the tank could go above a soffit above a shower area or something.

I'm in southwest wisconsin so this would be drained for winter, but i'm hoping the tank would be used and routed from my home's heat source instead.

I guess tank size depends on my family's usage, but i guess we'll see how fast it can heat up 30 gallons or so. Perhaps small batches of 10 would be better if we can take short showers spread through the day. 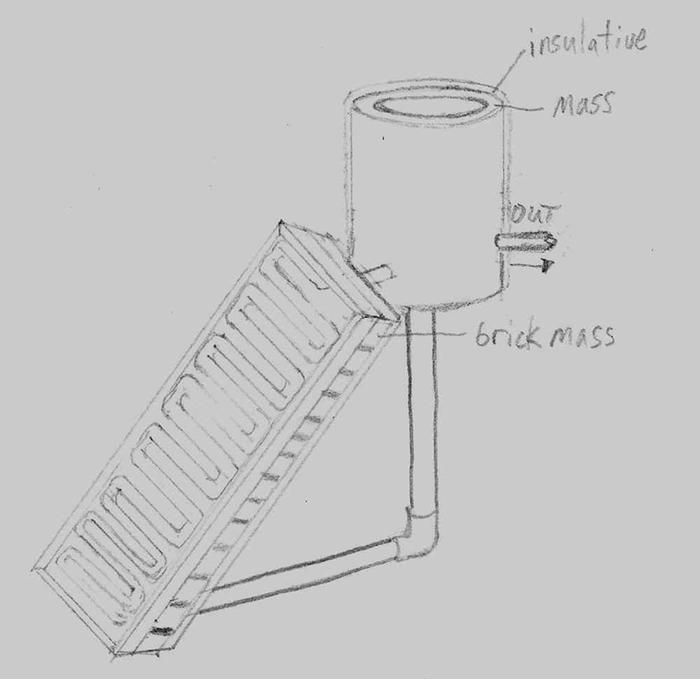 posted 3 years ago
Would a brick mass under the pipes cause a "thermal flywheel", where the bricks are cool and take time and energy to heat up, robbing the water of that heat, and then in the evening the bricks are warmed up but might not be hot enough to also heat the water once the sun sets? So perhaps it creates a longer window of warm water, but it might not be hot enough for you. I haven't tried this so all that is just assumptions.