Gordon Haverland
Posts: 489
Location: Dawson Creek, BC, Canada
43
posted 2 years ago
[What forum?  I picked one, and you might think it is wrong. ]

Trying to search for this in a search engine one gets swamped with medical or agricultural incinerations of bodies (tissue, humans, animals, ...).

What a person is trying to burn in this incinerator, is diseased plant material  And that burning might be best done in a couple of steps.

There is supposed to be a lot of expertice here on rocket mass heaters, so let's see if we can bend this to accomplish what is needed.  But for me, I think the best incinerator is something at the focal point of  solar mirror.

A particular demonstration of a rocket mass heater had:
a vertical fuel area (fuel "flows" down)
a horizontal burn zone
a vertical chimney (where the smoke is burned)
a downdraft into a chamber which absorbs heat
an eventual outlet.

Some plant diseases may have you trying to destroy leaves or grasses, which are highly flammable when dry.  Other plant diseases give you a dense piece of wood (cellulose, lignin and hemicellulose) which is loaded with water.

The plenum where a rocket mass heater deposits heat to a thermal mass, is where I am proposing to load the material in the first step.

I am thinking one puts a thermal (reflective) shield around the  "vertical column" where the smoke is burned, since we don't want to radiate any heat away until after it processes what is in the Stage 1 plenum (if anything).

I suspect this plenum is approximately constant area, it may be a labyrinth; in heating applications.

In Stage 1 incineration, we want the flow rate of hot gas at the "end" of  the plenum to be very low, low enough to keep leaf fragments from flowing out   We probably want some kind of replaceable screen at the end of the plenum to stop possibly diseased material from leaving.  The gas flowing through the plenum, should have less oxygen than normal air, and should be hot.  The killing of pathogens involves a time/temperature trade off.  You can go for less time, it the temperature is higher.  I am going to guess that on the long time exposure, you want something like 200C or 400F (not exactly the same, but close).

Similar to making charcoal, it is likely that the temperatures in the plenum will be high enough to drive many pyrolysis reactions.  The material put into the Stage 1 plenum will become an approximation to charcoal.  The exhaust from the plenum will be laden with gaseous fuel (and could resemble smoke).  It needs to be fed into another rocket mass heater to burn it (again).

The disease we are concerned with are bacterial and fungal (are their any viral or prion diseases of plants?).  The pyrolysis gas from Stage 1 should  not have disease producing components in it.  It could be biochemically active, which is why it needs to be burned in a Stage 2 rocket mass heater.  This pyrolysis gas should have much less "ash" content than the original material.

I am thinking, that much of the original load of diseased material to be incinerated, will be come an approximation to charcoal.  And hence could be burned as fuel in the stage 2 rocket mass oven.  But if a person was trying to destroy things like diseased leaves, some of this charcoal could be very fine.  It might be hard to reliably burn six 9's of it in a rocket mass heater.

If the "solids" from Stage 1 got enough time/'temperature exposure, they should be charcoal (aka biochar) and could be just added to your compost.  But, how do we tell if they got enough time/temperature at heat?  Which is why I am thinking it needs to be "burned" twice.

Just like an ordinary rocket mass heater, this creates heat.  But the heat is "released" quite a bit differently.  Is there some use for the "excess heat" in this process?

A friend pointed me to storing excess windmill energy by making fertilizer.  Is something along that line feasible here?

posted 2 years ago
This sounds like a great idea, but my preferred method these days involves tossing anything dodgy onto a nice hot burn in the kontiki. I figure nothing is going to survive 500-600C, and I'll get half of whatever carbon is in the material, so it's a win-win.
Gordon Haverland
Posts: 489
Location: Dawson Creek, BC, Canada
43
posted 2 years ago
The only Kon tiki I can find, is a raft.  Is there another word for what you are talking about?

posted 2 years ago
A conical biochar kiln, adapted from a traditional Japanese design and perfected by the trials at Ithaka Institute:

These are my first two prototypes: 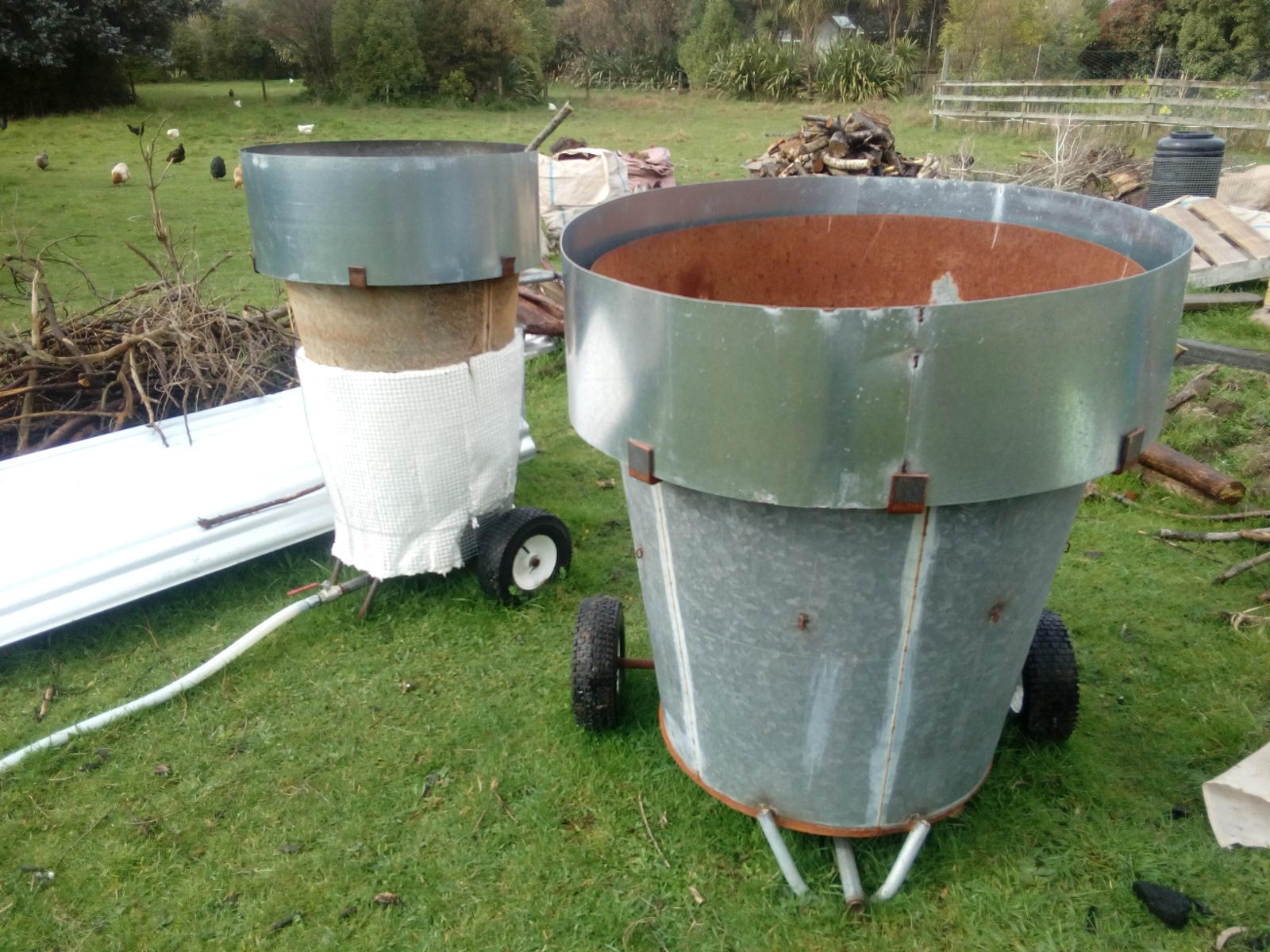 The design helps to develop an effective flame cap, which performs the dual functions of ensuring a clean burn and limiting airflow into the embers. I wrapped the smaller one in ceramic fibre blanket to keep more heat in the process in the early stages of a burn and it has improved the char quality. Will do it on the bigger one soon.

posted 2 years ago
I'll second the cone kiln design. Diseased or not isn't really the issue. The issue is complete charring, efficient use of labour, and diverse potential feedstocks. Cone kilns manage those admirably.

I made a burn trench recently for charring a huge pile of woody brash. It was excellent, and gave me a large quantity of biochar for use in the garden.

It is more 'friendly' to use solarisation - this can be done in a number of ways. The two methods I've used are:

1. SOIL solarisation where the soil is covered in black plastic sheeting and it bakes anything under it. E.g. couch grass infestation took one year to completely eradicate (that's a pretty good outcome for such an invasive species).
2. CONTAINER solarisation where plant material is placed in either plastic bags or containers (a black plastic garbage bin is ideal) and left over summer. The goo left behind can be diluted with water and used as a weed tea fertiliser.

Because unless you're going to seal it up hermetically, all that carbon is going back into the atmosphere, and quite soon. By creating biochar with it, we're getting half of the carbon parked safely outside the fast carbon cycle for a good long time, and I'd far rather have half a loaf than none at all (ok, to be fair, a tiny fraction would probably become humus in the soil, but we're talking 1% or less).
Gordon Haverland
Posts: 489
Location: Dawson Creek, BC, Canada
43
posted 2 years ago
Fire blight (for rose family like apples and pears) does spread from "splash" (when a rain drop hits an infected area)..  I've written about burning leaf fragments which are diseased.

I have no idea what (burn) conditions are necessary to stop distribution of viable bacteria in trying to destroy them.

There are ways to ensure 4N, 5N, .... destruction of disease species.  Incineration happens to be one mechanism which can under the proper circumstances; sterilize the diseased material.

Turning harmful bacteria or fungi in to carbon dioxide and other stuff is probably preferable to having them attack plants.