James Dunham
Posts: 4
posted 6 months ago
Hi Y'all, just joined. 67 younger looking straight male seeking female companionship on my 10 acre homestead on Whidbey Island, Washington. I am still on grid but hope to augment with solar one of these days. Have 24 goats that provide meat and dairy, two large hoop houses for the veggie side of things. Currently I have started harvest mode and am processing for the freezer. I have done chickens, have the equipment, and will be doing some goats when the temperature gets lower. So, a potential mate needs to be an omnivore and interested in better options for food than the factory fare. Should be able to handle the smaller tractors, help with midwifing the goats, raising the kids, milking (with a pretty fancy home-made machine), help in all the processing, and generally understand what it takes to make it through winter. Even though animals are harvested, must love them while they are here, the ones that go, and of course, love on the ones that stay. Parted with my past company that was not really cut out for this and ready to try again. It's a lot of work on my own! Surplus, if there is interest, can go to the local market. Should be able to drive stick shift, as in the truck, help collect hay from an offsite local farm, you know, some of the heavy work. Must cherish home grown food. Must be fairly organized, and like a moderately clean and organized home.

I have tried other sites but most of what I find is women that want to drink wine and walk on the beach, travel, that sort of stuff. I rarely drink, only socially a little now and then. I like a dark beer. I smoke a bit but have cut down a lot, don't smoke in cars or house, around animals, on the way to quitting.

Been here over 20 years so I am pretty well settled.

Any interest out there?
Me-and-Rufus.jpg 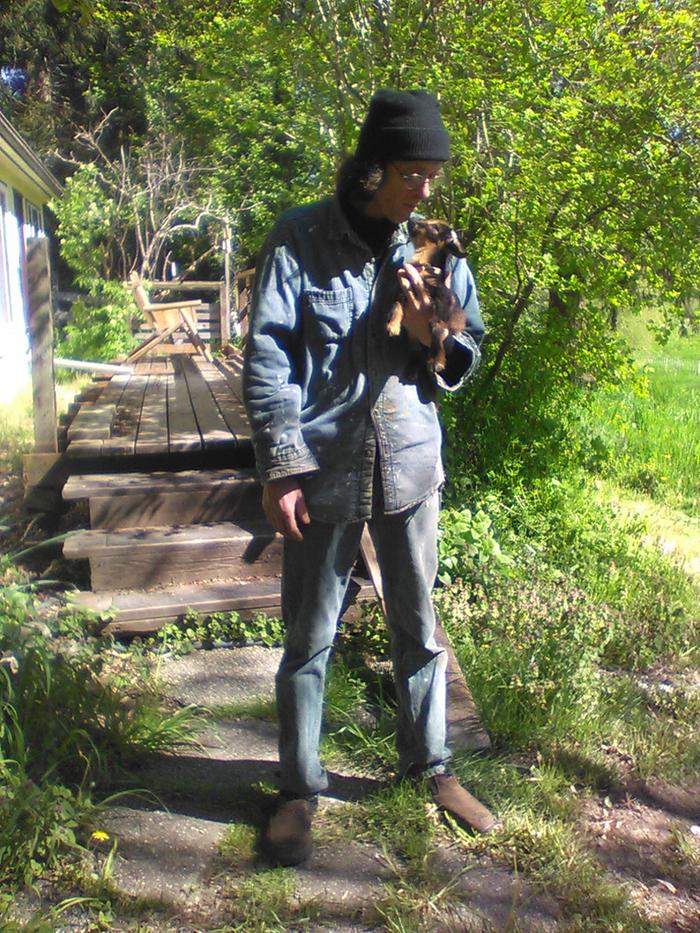 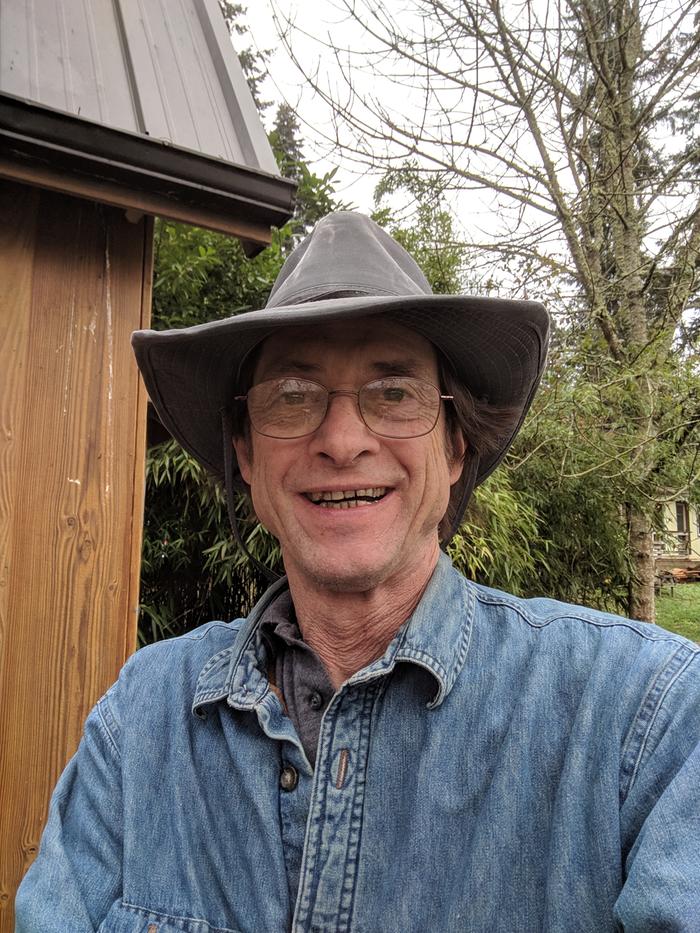 Don't color me interested, as I'm quite settled at the other side of the country.

This is just a friendly 'howdy.'  I'm glad you added the photos, as otherwise, your post reads like a job or position advertisement.

It's good to be up-front about expectations, but you might want to add a bit more about you.  Obviously, you work hard and I think I can discern other good qualities.
As much as it might feel awkward, you need to present you
.

posted 6 months ago
Maybe you need to seperate the needs, maybe you need more help and not just have all the work done by yourself and a potential love interest.

You might be able to get seasonal help, a young person or two who want to learn animal husbandry, work trade where they could camp out, maybe WOOFERS or others you meet thru this ste

Of course a compatible girlfriend does need to be into the goats and homestead but I think it is asking alot to have a woman of your age neccessarily be able to help with the heavy work of moving bales.

James Dunham
Posts: 4
posted 6 months ago
Thanks for the input Ruth. I see there are those writing books on here and had the same feeling you did. New to this. A bit different than a dating site.
James Dunham
Posts: 4
posted 6 months ago
Thanks for the input Sue. I am currently living in my mother in law while I rebuild a mobile into house standards. The major work is done, now getting to the finer stuff. I had gutted it and had a war on particle board, and there was a lot of it! So, that being said, I will have a really nice cabin available when I move back into the mobile. So that is one thought.
The hay bales I mention. They are like 2/3 size. The crew at the farm I get them from, and I help them get all of them in above what my needs are, each season, are mostly in their mid seventies. I am one of the young ones. Women included. The hard part is getting the hay put away there, but after that it is just a pickup load now and then from one of their barns.
About me. An odd ball no doubt. As with many, I had my own weird experience growing up. It was not pleasant and had profound effects on me. The results of which I believe cause me to do what I do. I figured out very young that time on my own tinkering with things did not give me the grief humans did. As a result I became very knowledgeable about how nature and things worked. No matter how I try to be 'normally social' at this age, I am still uncomfortable at some point. Believe me, I have tried. I see so much BS out there and don't buy into it or play the 'game'. This all probably resulted in me being suspicious of the food supply long ago, have a love for older well built machinery, and am most comfortable with the homestead scenario. I do get out now and then but for the most part I am most comfortable home.
When I look back at the mates I have had, they all liked what I got done and benefitted from it. All tried to take a big chunk of what I created, well, all but one, the first, upon parting company. So now, having survived and saved the farm, again, I am here in this space.
So now I look for a kindred spirit that would understand, and might also like this lifestyle.
I have traveled most of my life, including substantial moves, so I am kind of done with that. I guess many haven't and have it on their bucket list in retirement. I cut out alcohol pretty much, don't have it at home, might have a glass of wine or a beer at a social event, but that is it. Throughout life up to now I have experienced the damage it can cause, and I like to get up in the morning fresh. I still smoke some, but have cut down a lot and do not do it publicly, in my vehicles, or in the home. May quit one of these days. Something about my morning cup of coffee and a smoke, sitting on my deck watching the sun rise over the east hill. I know, no excuses, but it is what it is, so far.
Since my family was such a mess, a long story in itself, I don't have much contact with them, certainly don't have constant connection. Like I said, I don't like BS.
These days the goats are pretty much my family. I have one runt that serves as my dog, although lives with the herd, but would rather live with me instead. I feel for him but the month he was in my home was like having a new puppy, challenging!
After a number of years, I am now growing veggies again. This time with the goat input. Working this carbon capture, regenerative thing. I think I kind of do it naturally anyway. It's nice to have fresh things again. A big difference than what I get at the grocery.
All this requires some level of physical work. I just used the hay thing as an example. It's much easier with two. With just me, there is only so much I can do. I took on milking this year, which involved breeding, kidding, raising the offspring, and now processing vegetables into the freezer, as I did with the milk, a whole freezer full. I don't have time to do the finer things like cheese and such.
Ok, bared my soul a little. Be nice, I have my fragile points.
Ruth Meyers
pollinator
Posts: 283
Location: West Virginny and Kentuck
85
I like...

posted 6 months ago
See, now, that wasn't so painful.

With just a couple of paragraphs, we know you a bit better.

James Dunham
Posts: 4
posted 6 months ago
Just a little more that might be pertinent. Childhood from age 7-11 was in England and Germany so there is bound to be some effect there! Favorite music seems to be, lately, a result of getting an Echo Dot. I can listen to whatever genre I feel like, and since blues are hard to find on the radio, I just tell Alexa to play Chicago Blues. I have dabbled with the harmonica throughout my adult life and made a concerted effort to learn the blues, but alas, that takes more time than I have. I learned a lot, but still can't do well at it. Maybe someday when I slow down? It seems it is near nigh impossible for me to catch up to those that learned it in their early years. My forte is mechanics, electrical, and generally how things work. I was pretty good at taking things apart to see what makes them tick by 5. This did not help with my relationship to my parental units as I progressed in my curiosity! I ran a repair shop here at home for 12 years on the island which allowed me to be self employed, a boon for a person like me. I did lots of repairs to meet the local musician's needs!
Needless to say, I have a few really neat and effective older tractors, and older Harley, and my two older vehicles for daily driving, one dating to 1976. They all work well for me.
Ok, got to get back to it, hanging ceiling lights.