Oops, almost got squished! My cat like reflexes saved me fom harm

Dale Hodgins
Posts: 9002
Location: Victoria British Columbia-Canada
666
posted 8 years ago
I was standing on the beam closest to the house when one at a distance fell toward where I was working. I grabbed the edge of the roof and lifted my legs high to avoid these giant dominos. The noise was thunderous. This was a carport on large posts and beams which were held together by long strips of panabode. Turns out some were laid in place but never nailed. 35 yrs later I almost was.

I ended up hanging from the lower portion of the roof on the left side of the photo. It was too high and there was a tangle of debris below so I had to shimmy up hill until I reached a point where I could drop down onto a lower roof just past the shaded ladder. Not a scratch !

Really tired fingers and forearms. Some temporary bracing would have prevented this.
Photo-0571.jpg 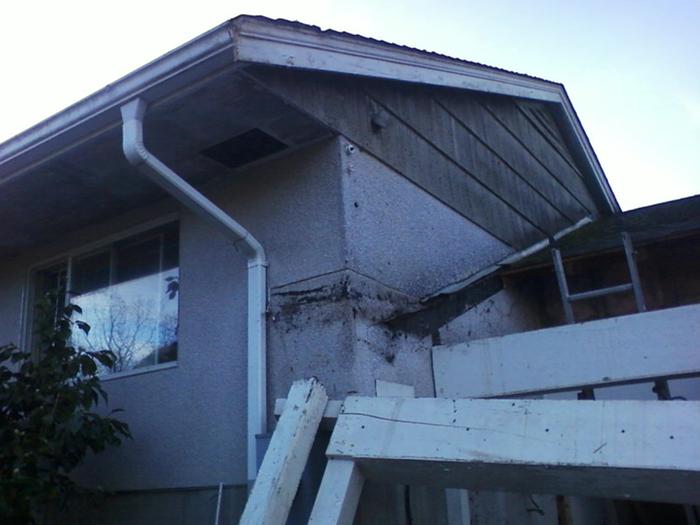 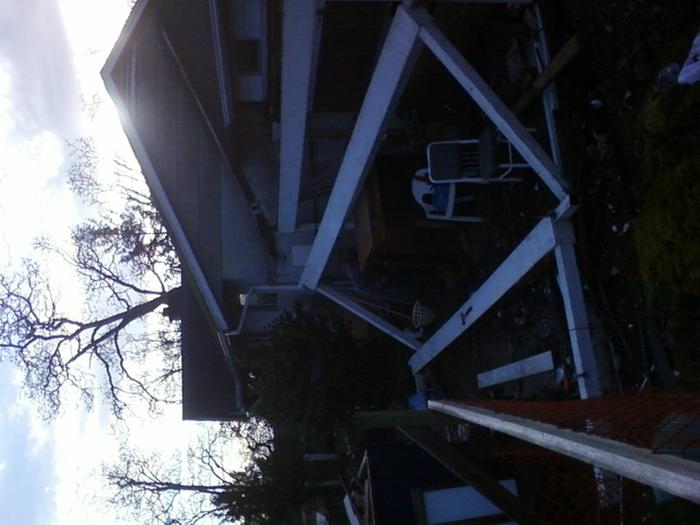 posted 8 years ago
Nice escape Dale -- I'm picturing something like Mission Impossible acrobatics on that one!

Good reminder to do a good survey of every build job when done -- are all the pieces really together as they should be? Temporary shims removed? And have I reviewed the structure relative to pictures on Fail Blog?
Dale Hodgins
Posts: 9002
Location: Victoria British Columbia-Canada
666
posted 8 years ago
I should have mentioned that this was a demolition job. This house was moved to one of the gulf islands and has been turned into a nice cottage. The original plan was to demolish but I managed to find a mover that would take it if I did all the prep work. The owner saved a few thousand, I made the same $5000 as though it was a demo but I did less work, Somebody got a cottage and we saved 50 tons of resources from the land fill.

The red guest house below is a good example of a job that went perfectly. It was built in a flood plain by a fool who lives nearby and has witnessed many floods. He built it well below the flood zone. The owner foolishly built up the soil all around so that a pond would form under the building occasionally. This created a ridge that prevented water from a neighbouring field from flowing to the river. He thought he was creating a protective dyke.

All of the insulation in the floor needs replacement. This is the only building that I have ever lifted myself although I've prepped 50 of them for house movers. The ground is incredibly soft so I had to dig out spots to place gravel and then compact it to create solid footing for the jacks. The weight compacted the gravel another half inch. I set this up so that at no point was any part of my body in the death zone. It was brought up in 2 inch increments and each time shim blocks were placed on the original piers. It took 15 hours. which includes excavation by hand, jacking and some concrete work.

Over and over again I see situations where things are built without regard for water and how it can destroy all of our efforts. This further re-enforces my Social Darwinist outlook.

---- Statistically falling and being hit on the head are considdered our greatest risks. But I'm not a faller, I'm a grabber on-er, in this case and in several others over the years. I'm also adept at jumping or running at just the right time.

Hard hats are always a good idea. But by far the best way to protect your head is to never walk under where others are working. Moron

HEEDING THE ADVISE BELOW CAN SAVE YOUR LIFE
This is something that those workers compensation ads never tell you. THE MOST DANGEROUS THING YOU CAN DO AT WORK IS TO WORK WITH SOMEONE WHO IS REALLY STUPID. This danger is increased many fold if that person is in posession of any heavy equipment such as excavator or crane or if they have a chainsaw or a drivers liscense. Avoid dum guys like the plague. Society has a place for these guys but a construction site cannot accomodate them safely. I'm not talking about low IQ. Think Forest Gump ------ "Stupid is as Stupid does" Sometimes people who are otherwise bright are a safety nightmare due to erratic, unpredictable behavior. One of the best helpers I've ever had is a guy who would score in the bottom 5% IQ wise. He follows instruction to the letter and he has a great instinct for self preservation. 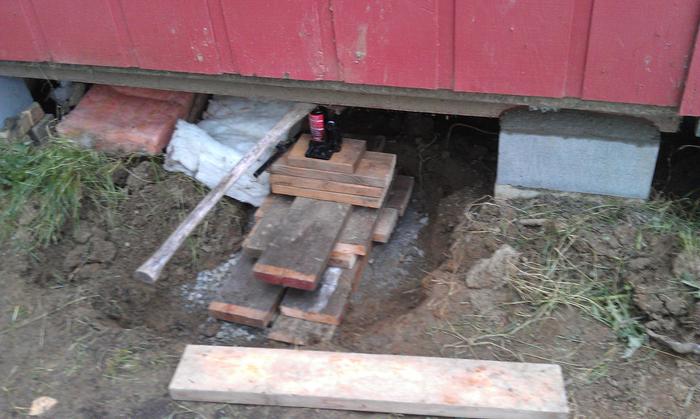 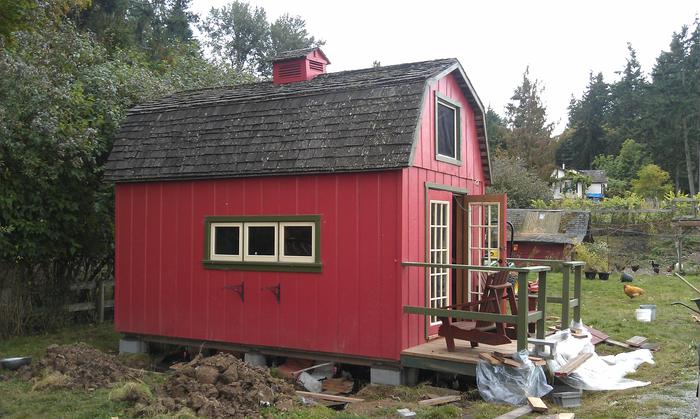 posted 8 years ago
Great point that "stupid" doesn't exactly mean "low IQ" -- in the science world I've come across a very bright PhD who often lost track of where the high-power invisible laser was pointed! And generally a lot of people who get pretty casual about disassembling 480V 60A lines or the connectors to high voltage power supplies.. But I usually hear that China is the most dangerous across the board -- from construction to engineering, safety is an afterthought...
Dale Hodgins
Posts: 9002
Location: Victoria British Columbia-Canada
666
posted 8 years ago
Today , with a lifetime total of 2 hours Bobcat experience, l decided to speed things up by not bothering to lower the bucket before driving fast. Not a scratch on me or the machine. Both were "touching wood", when this happened. 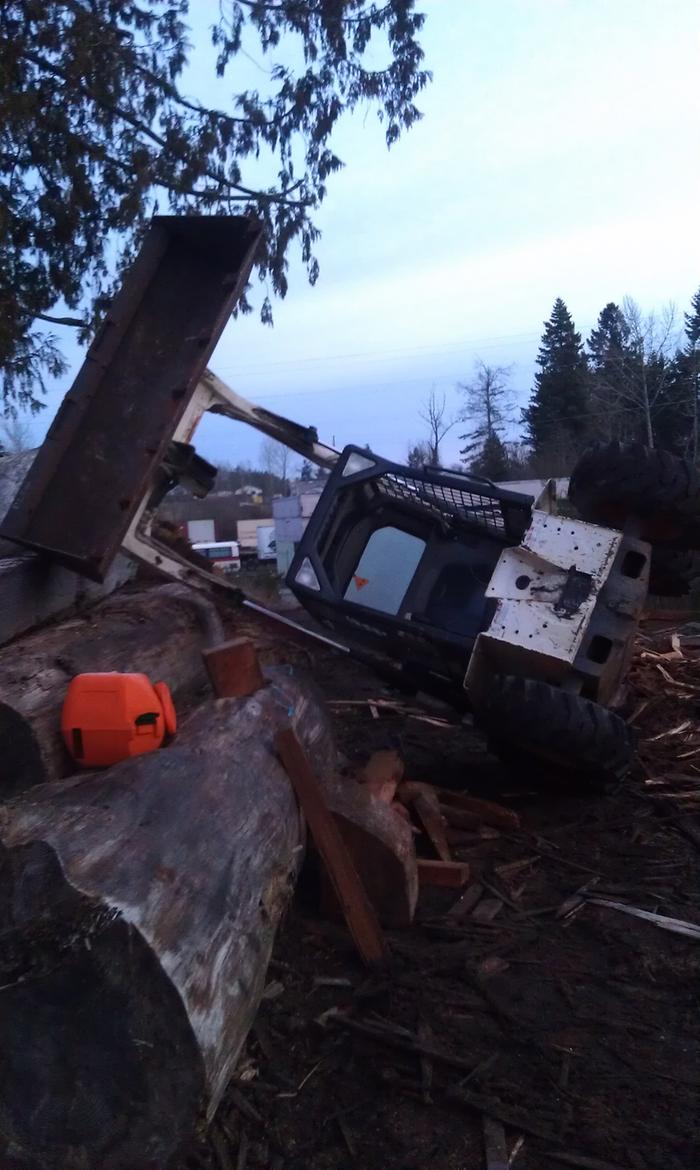 Rich Pasto
Posts: 100
posted 7 years ago
Your stories are only funny now because you didnt get hurt. Think about the label "stupid" you put on some guys. In my long experience operating equipment, landscape construction and now structural ironworking, I have replaced "stupid" with "LAZY"! Combine that with the "it wont happen to me" midset, and you have injuries and near miss events almost daily.

Guys dont roll bobcats because they are dumb. They roll them because, as you note, you dont want to take the 8 combined seconds to lower the bucket, move, then raise it again. Lazy! Guys dont generate unsafe conditions on my jobs because they are stupid. Lazy!
Some input to bolster your two hours of bobcat operating; always wear your seatbeat. Snugly. You might smack your head around if/when it ever really rolls, but you wont be ejected and crushed. The ROPS is there for a reason.
Dale Hodgins
Posts: 9002
Location: Victoria British Columbia-Canada
666
posted 7 years ago
With me, lazy has nothing to do with it. I started before dawn and finished after dark that day and helped load about 15 tons of firewood by hand.

It was a combination of confidence mixed with inexperience and a desire to maximize production on a rented machine that led to the tipping. I recieved a 30 second primer from the delivery guy and away I went. After dumping full buckets, I started out each time as I dropped the bucket. But several times I accidentally raised the bucket by pushing with my heel instead of with my toe. It was very early morning and I didn't know how to activate the lights.

Now with 16 hours experience, I can tell by feel that the bucket is dropping and I don't confuse control movements often. My belt was on and the machine has a padded bar. Even driven with abandon, I doubt that I would be in the same danger inside the steel cage, as someone on a dirt bike.

At first I had trouble getting much loose wood waste into the bucket. Now, most loads are crowned well above the top. I filled two bins with very tight clearance and got right near the max. allowable weight. I can carefully pick up big blocks and individual blocks as small as a softball. I carefully used the Bobcat to bend a bin latch which arrived bent out of shape.

I intend to buy some sort of loader whether it be a Bobcat or a tractor, so I'll check out some safety videos. But then I'll go flat out and get er done. It's not rocket surgery.
IMAG1023.jpg 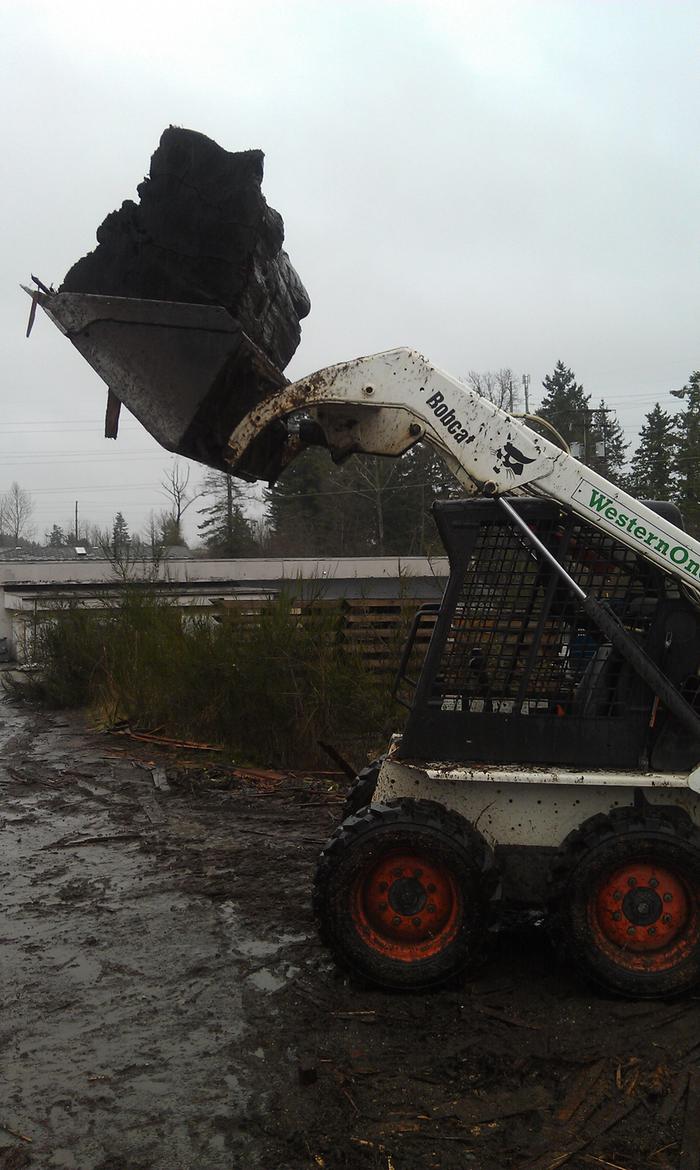 Andrew Parker
pollinator
Posts: 517
Location: Salt Lake Valley, Utah, hardiness zone 6b/7a
4
posted 7 years ago
I confess to being stupid once (at least). That is all it took. I was too tired, but went up on the roof anyway. I hadn't checked the placement of the ladder. I made it up without incident but when going down I noticed something was wrong then realized the ladder was slipping out from under me. I grabbed for the roof but miscalculated the distance and shattered my wrist. I rode the ladder down with my legs tangled between the rungs. I broke my fall with the back of my thigh against a piece of upright OSB and then cracked my head lightly as I came to a stop.

So, one shattered wrist (the orthopedic surgeon said it looked like a piece of shattered ceramic) requiring a plate and a pin, one hematoma the size of a volleyball just above and behind my right knee, and a mild concussion (I whited out for a couple of minutes on the way to the hospital) thanks to one act of stupidity, in this case working while tired, charged with adrenalin as a reaction to having just done something else stupid because I was working tired, and being complacent because I had been up and down that ladder at that exact spot dozens of times without incident.

Luckily, I didn't die and I am mostly healed after four years. The bone healed almost perfectly (an A- according to the surgeon) but I have problems with range of motion and pain from tissue scarring. I still have a little bit of the hematoma and some mild numbness from the nerves being crushed against the sharp edge of the OSB, and there was no brain damage, and there was no brain damage.

I will always remember what the ER nurse said when she saw me, "Men over 40 have no business being on ladders!". Apparently there is a statistical correlation between stupidity, age, gender and ladders. Who'd have thought?