Peter Kelly
Posts: 5
Location: Land Of Slocum, Nova Scotia
posted 1 year ago
I had a very bizarre electrical event after a recent windstorm and outage. I will describe the resulting problem first and then describe the event after.
A two glass fuse use block (these are old design) blew on my electrical panel during or after a power outage. Each glass fuse 20 amp. Each of these glass fuses seemed really BLOWN compared to blown fuses I have seen in the past. And the contact on one side was scorched. I have attached photos.

If I now turn the power off to the main panel, remove this two fuse block, insert two new glass fuses, turn the power on, the two fuses will blow. Note: I have checked this circuit which is for an electrical outlet and could see nothing amiss. The presumption then is that the problem with this two fuse block is a result of the power outage itself rather than the circuit involved since that circuit was fine before the outage.

This bizarre event occurred in this fashion:
There was a windstorm and power outage in the morning. The power came back on about 11AM. I went to town and on the way back I saw some power trucks in the neighborhood and assumed the power would be out when I got home. Sure enough the power was out.

But my power was out. This made no sense to me at all. I thought on this a while. I thought I should exhaust all possible remedies first, so I went in the basement, turned off the power to my main panel and turned it back on. THE POWER CAME ON!

This makes absolutely no sense to me. Anyway, the next morning I thought I should inspect the panel. I shut the power off and in examining it, found the above problem with the two fuse block. I put in two new fuses, turned the power on and the fuses blew as described above.

So, my second question is: what is the explanation for this, to me (electrical non-expert) bizarre event? ( I have told this story to a few people and they are mystified.)

The larger message may be to turn off your main entry panel during an outage. Of course, how do you know when the power is back on? 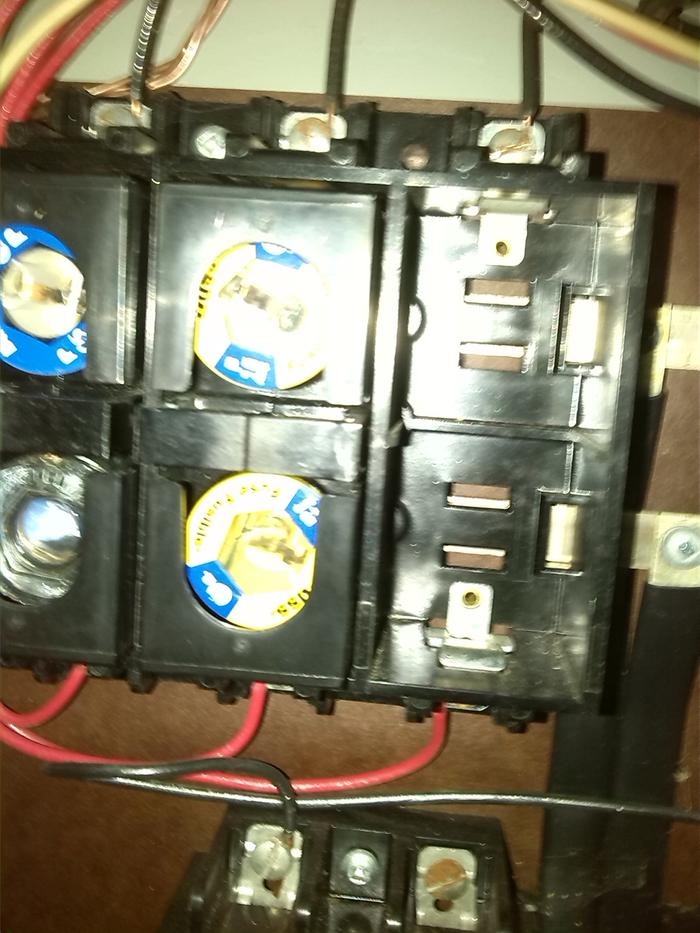 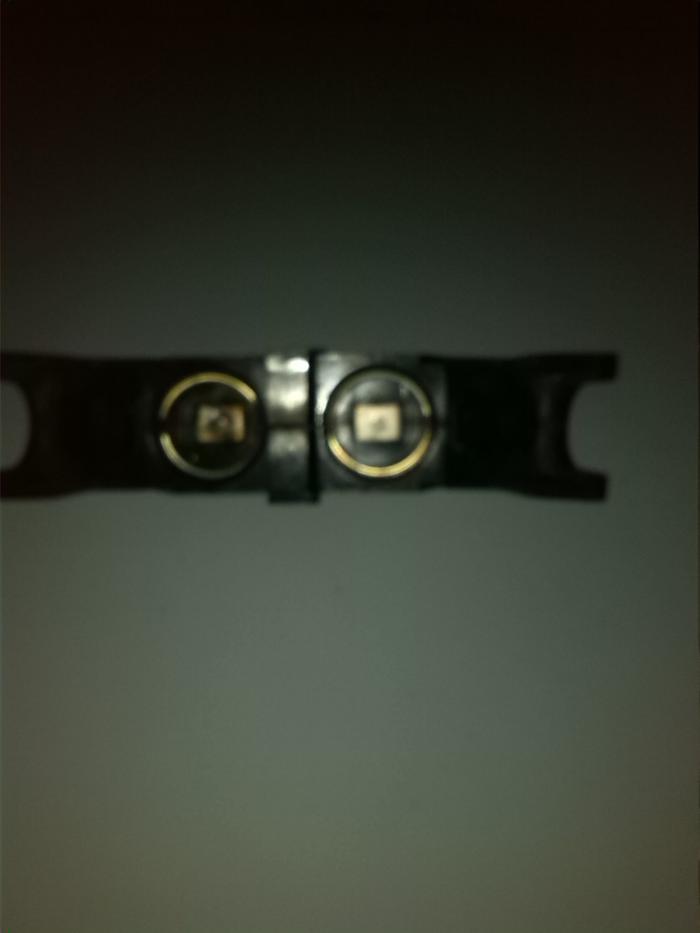 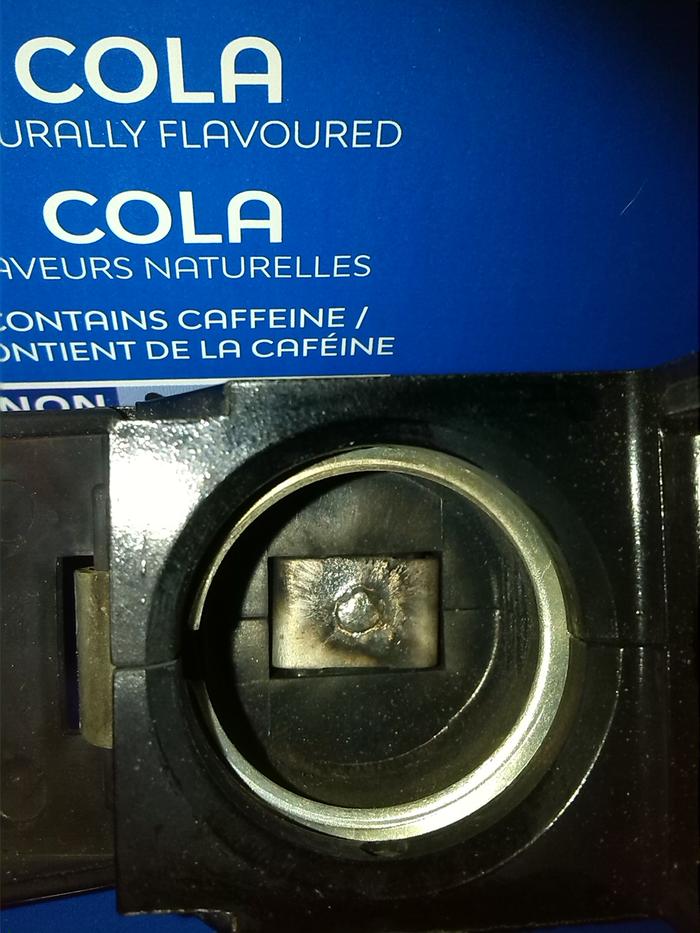 Peter Kelly wrote:..... The presumption then is that the problem with this two fuse block is a result of the power outage itself rather than the circuit involved since that circuit was fine before the outage.......

Yes, the block itself can go bad, but you won't know that until you've removed every single item on the circuit, plugged in two new glass fuses, and turned the power back on.

The second question is unanswerable.  I've never believed  in occam's razor as I've seen results from events that have many simple explanations which are not the actual real explanation. It turns out life is stranger than fiction and the chance of the real explanation being simple seems to be about 50%.  Make up your own story until someone can prove it wrong, you can think of a counter example to disprove it, or someone tells you why logically this cannot be true.

posted 1 year ago
I have had this problem, but in my case it ended up being a grounding issue. I am not sure that is the case with you though.

We know a few things, and that there was not an issue with your place until there was a storm in the area. Since power trucks were on your road, we can also conclude that there was damage done on your road. Now why your neighbor was not affected, and you were, could take the shape of many things. Some of it depends on whether the area lines are 3 phase or single phase, but also where the circuit breaker/breakers is for the main power line for your street.

There are a few possible results here:

By the way I read and reread your post, it seems the two fuses that keep blowing, are feeding a single 220 volt circuit. Is that correct?

1. To blow a fuse repeatedly means there is too much amperage in the circuit somewhere. That could take on the form of water getting in on the wiring somehow, so it may be subtle, or in an area where you cannot see the wires. You said you had a storm, but what was it like? High winds only or high winds with heavy rain?

2. You have fuses which tells me the entire wiring system is rather old. Copper gets really brittle as it ages, so it is possible that when the power was returned by the power company, the sudden amp draw did damage to that particular circuit.

3. This scenario ties in with number two, but I have seen some really goofy grounding methods in my life. If someone tied the neutral to the ground somewhere, and that is most likely the case with older wiring, goofy things can happen.

4. Again, either when the storm hit, or afterwards when the power came back on, damage was done to the fuse box, again a rather old electrical component.

You could call your power company and find out what occurred on your street. I am not sure that it would matter because I think you are going to need an electrician. All it takes is brittle copper to break a connection somewhere and it will overenergize the circuit and cause it to blow the fuses. That is hard to diagnose online.
Peter Kelly
Posts: 5
Location: Land Of Slocum, Nova Scotia
posted 1 year ago
Thanks for the comments. I am an amateur "electrician" at best.
The circuit in question is 220 only one electrical outlet on it. At the time of the storm, there were no devices on this circuit. The circuit is also completely inside the house not subject to weather elements.
I have also inspected the panel the best I could and could see no loose connections or other defects.

I have power to the rest of the house so this is not a priority right now.

I did do a bit of work on this recently, reluctantly since I do not want to lose power to the rest of the house.

There was an unused two fuse fuse block in the panel so I decided to try that instead of the old one. I turned off the power to the house. For the circuit in question, I put in the two fuse fuse block with two new fuses and tested the circuit for continuity and there was continuity. So, presumably, the circuit was good.I closed the panel door and turned the power on. There was a flash of light out of the sides of the panel and a burning smell. All the power to the rest of the house went out but no other fuses were blown.

As before, I then turned the power off and then back on and the POWER TO THE REST OF THE HOUSE CAME BACK ON. I inspected the fuses in question and they were all black inside the glass. I have never seen glass fuses blown like that.

So, the really mysterious part is why the power comes back on when this circuit blows and the power is turned off and then back on.

At this point, I am reluctant to bring in a professional electrician as this may be a non-standard event and may take considerable time to debug.

Somewhat in connection to all this, I do like the occam's razor comment. Occam's seems in a lot of cases to be used as an out to explain things when it may take a lot of time and effort to find the real explanation. In our increasingly technological world where more and more variables are at play, it may be just too time consuming and costly to do real analysis. And, of course, this may result in some really disastrous consequences down the techno road. Computer systems are excellent examples of this where versions of software that have not been fully tested are unleashed on the users and it is up to the users to find the bugs and report them. In many cases, all the bugs will never be found. That's maybe ok for word processing software but for systems that run our nuclear plants, stock markets, air traffic control, etc. not such a good idea.

posted 1 year ago
To answer your question, you have wires in that circuit that are arcing out.

The rest of the house goes dark because all the amps are being consumed by that circuit. They are not overheated, so they do not blow the fusses. That is NOT the case with the circuit in question. Those wires are arcing out, and thus heating up (that is why there is a delay in blowing the fusses).

You have to trace you wires from the fuse block, to the outlet on the ill-fated circuit. Somewhere along that wire there is damage done.

It could have been done from a power surge from the storm, or it could just be a rat chewing on a wire.