posted 2 years ago
Posting images with notes and some WHYs which are mostly a moving target.  I am hoping someone has time and inclination to note and share insights about design flaws, or improvements.  Crazy ideas versus never gonna happen ideas.

I have no building experience, unless helping my Dad tidy up his garage and construction sites counts :)  I am familiar with some tools.  I can use a Dremel without poking my eyes out and still have 8 fingers and 2 thumbs intact.

Mostly I am good at learning on the fly, so not much is a serious challenge.  When learning something new, I practice a little, go for the gusto, and see what happens.

1) ladder, pulley 'elevator', or  windlass to get up and down loft

inside loft floor/ceiling (above mh/s with circle of round wood poles extending 3’ out cobbed into dome shoulder, horizontal round wood poles joined with inside vertical round poles, flowering evergreen vine trailing on exposed poles outside

5) stone steps with growies front and back (not shown), 4’ wide (over water trough) (between ondol heaters in hugelkulturs)

8) hugelkulturs with heaters for winter around and between dome wall and cob trough, also noting dome wall shape, bottom is 6’ thick, top is 3’ thick


A little background for this beginning of a building plan.

1)  My Grandmother had a dirt floor in the old place, located on inland across the south Georgia and north Florida state lines.  Lots of clay, sand, and loam.  The new place was built by my Dad and uncles who set out to make Grandma a 'real' home they thought she should have, even if she didn't like it.  She missed her old floor.  Great Grandma didn't like having a bathroom inside.  She lived to 98 and never did use it, not even to wash her hands.

About 8ish, I asked my Dad why the floor was different, after listening to Grandma talk about her old floor.  When he figured out what I was asking, he described the dirt floor.  It was mostly hard red clay mixed with stuff they all stomped on while it was wet.  Leveled the surface and let it dry some, then did it again.  Then built a three-story shack - his words - up around a gigantic oak tree.  Grandpa built on the side, so how much of a shack it was isn't clear.

Scrap lumber was nailed into large branches for sleeping.  11 kids, so the oldest slept up top.  Youngest in the middle.  Babies with Grandma and Grandpa.  No heat.  A wood stove covered by a tin roof shelter outside and that is how dozens of people were fed until 1959.  Dad was born in 1936, Grandma in 1899.  If food couldn't be eaten or saved, it was composted or burned immediately to discourage bears and scavenging critters.  They kept cats around to keep mice at bay, and dogs and a mule to keep pesky critters out of their abode.

No fridge.  The root cellar was relatively new, built after my Grandpa died (my Dad was 15).  It had a spring running beneath it.  Since I never saw it, I have no idea how the cellar was built over a spring.  Still, everyone talked about keeping stuff there for years and locking each other in it for giggles, so it must have been real.  They bathed in a creek all year round.  They used sand and weeds - no soap unless they wanted to use lye that Grandma made and that was seldom done.

For a time water was carried mostly by the kids from the creek.  Eventually, at the new house, a well was dug and had a pump.  They wore clothing made mostly from croaker sacks, aka feed bags neighbors gave them.  (Though Grandpa had a good job, he was also greatly dedicated to alcohol so they usually owed someone something.)

The original roof is 60 years old now, and still doesn't need replacing.  I recall my Dad saying how the framing exceeded modern standards.  Not surprising since he and a few uncles were engineers.  On the other hand, no one wants it anymore because they used asbestos tile siding.

There's more, but you get the idea.  So, without knowing why early on, I wanted to live in such a house.  Across years of listening to talk about the old place versus the new place, rules accumulated about building a home that would last at least a lifetime.

2)  I've had pneumonia 4 times in the past two a half years.  I gotta get away from this extreme heat / humidity / constantly molding environment.  What I build must support and encourage a healthy living environment.  Though an area has not been selected yet, it needs to have four seasons dry enough to keep common molds in check.  I would return to Lake Superior in a heartbeat, however most of those areas are terribly contaminated by tailing ponds.  'Where' is being researched.

3)  Community.  Mentioned elsewhere on Permies, my Grandma and a lady down the road helped each other survive and raised over 20 children without suffering starvation as so many did in their time.  Each did their own thing, but they consulted with each other now and then enough to cover all the bases for the upcoming year or few.

4)  I want to use natural materials as much as possible, so cob with strawbale at the top of a thick monolithic cob dome is the current choice.  Still researching basalt as an option because I'm not sure how carbon footprint friendly the making of it is, though it is stronger and lighter than steel.  I prefer not to build with electricity or conventional plumbing, or find a way to make my own.  Only need enough space to get everything done throughout a harsh winter or summer without leaning on others for this or that.  Self-sufficiency is the ultimate goal.  Next is produce enough to share or trade.
2-story-dome-with-paddock-pond-critter-trough-ondol-mass-heater-living-roof-image-0.png 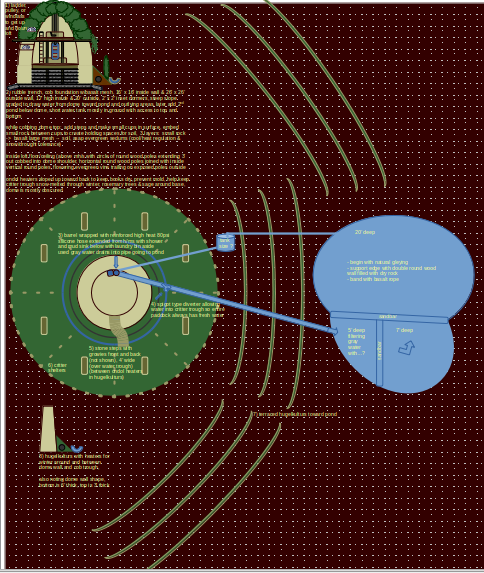 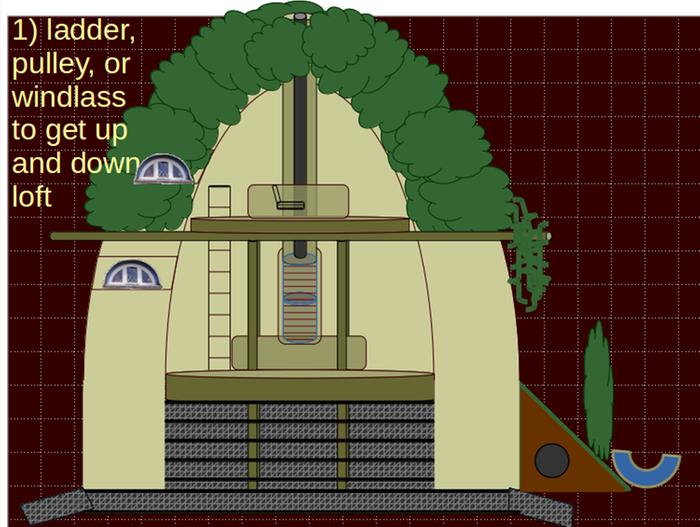 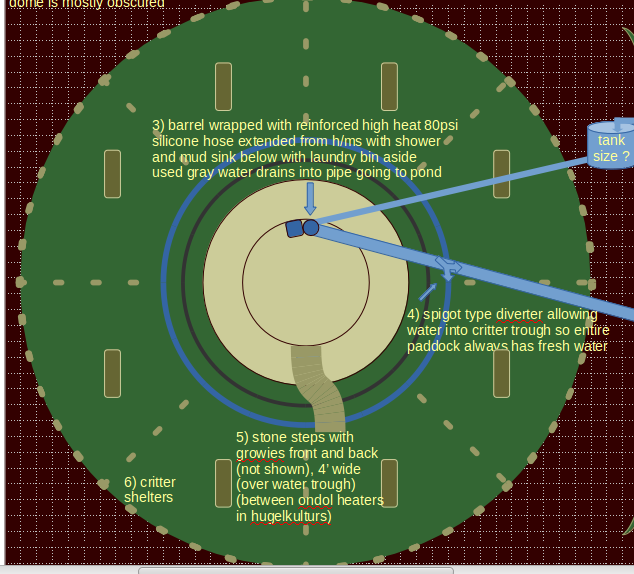 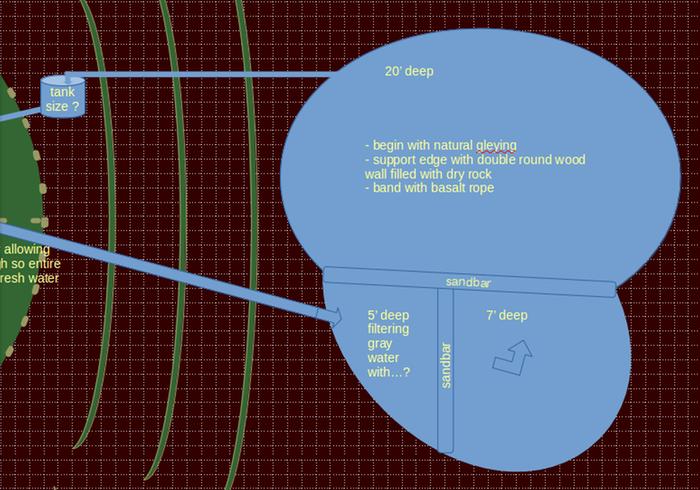