Help me get eggs from my Jungle Chickens!

posted 11 months ago
I was reading a thread in this forum about raising free range jungle chickens, but it was old so I figured I'd start a new one to ask my question, hope thats OK :)
I have a small flock of 6 semi-feral chickens of various breeds, all seem to be adapted to living and foraging for themselves in the jungle.  The rooster and one hen are the tamest, but are not too interested in being touched or held haha.  I feed them coconuts and meat and other kitchen scraps and occasional chicken pellets but they mostly feed themselves. They live between our house and the jungle, in a small vine-covered tunnel next to a fence, that they seem to have chosen as their home.  I hope to build something there for them to lay their eggs in since they spend most of their time in it when not out hunting.  They forage and hunt all over the property which is plenty of tropical jungle land.  They can fly very well, and sleep high up in the large bamboo stand.
I want to get eggs from them, now that some are starting to get old enough.  I tried making nesting boxes out of plastic totes with removable tops, by cutting a hole in the side and filling with the bamboo leaves they like nesting in, but they were not interested in going inside.  I'm assuming because of risk from rats (we have lots of large ones here)?  I am looking for suggestions for how I can keep them free-range but also be able to gather their eggs by at least knowing where they are laying them or somehow building a nesting area that I can convince them to use that is safe from rats (which are basically the only predators here, other than the occasional stray cat or dog which we try to keep away from our property).  Thanks in advance!  Photo of me and Floofy the rooster (he got named when he was still a fluffy little baby and I thought he was a hen!  He is definitely the boss chicken,  but is the smallest of the whole flock and its hilarious to watch him trying to keep up with all his tall, swift and long-legged hens). 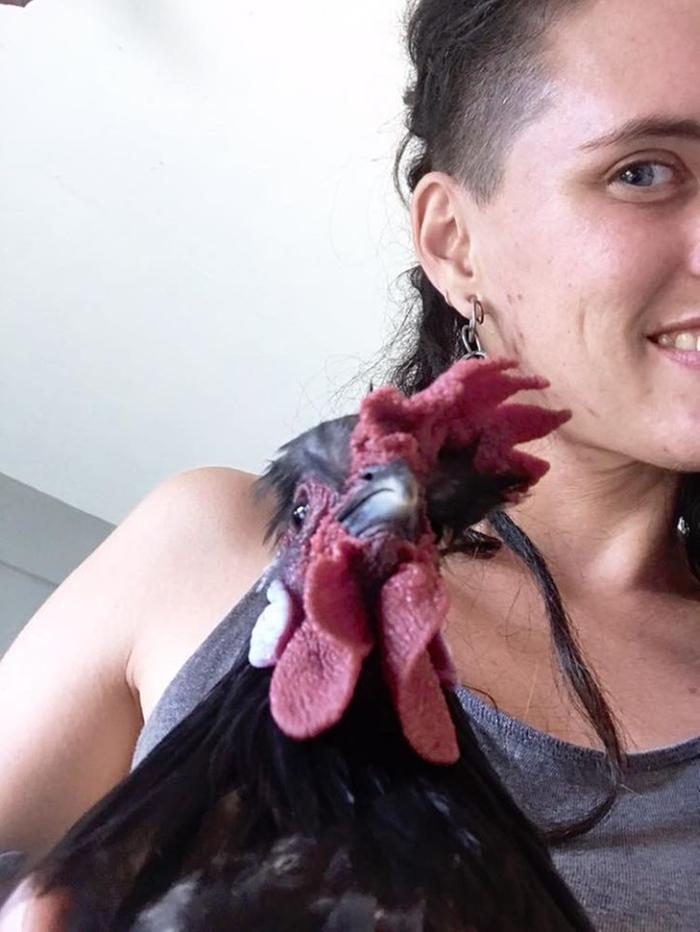 posted 11 months ago
Aloha, Sile! First question....where are you located? I'm in Hawaii, so maybe I could relate. Second question.....are the chickens feral mixbred chickens (that is, they have some domestic egg layer blood in them) or are they truly jungle fowl? In my area we have plenty of feral type chickens. They are a mixed lineage of fighting breeds, meat breeds, and layers. After many generations they boil down to a certain "island" look of feral chicken, very much looking like a jungle fowl but not quite.

The reason I ask is that it makes a difference on their instincts and their laying potential. My Hawaii island ferals tend to be secretive about their nests. They are very difficult to find. So if I want eggs from them, I need to confine them in a pen of some sort. When free ranging, I've never had them use a nest box. Never. But they willingly use one in a pen. My pen is 10 foot by 30 foot, so it gives them plenty of space.

If I want the ferals to be friendly, I have to feed them treats daily. I keep a few running loose for centipede and froglet control, plus to give me new chicks from time to time. I built a small pen (in case I need to catch them) and every morning at dawn I toss in a bowl of goodies. Perhaps bread, or peeled bananas, or seed of some sort. The birds cone for this breakfast every morning.

posted 11 months ago
(This is Sile, just logged into our other account, oops) I live on the island of Saipan, so my chickens are probably similar to yours.  I have 2 small black hens that look the most wild, and then 2 reddish larger hens and one medium sized peachy hen that are probably mixed with some egg laying breeds, but definitely some kind of random island chicken mix.  The people here have told me the nests tend to be hard to find, but if you're able to follow them sometimes you can find it.  So far the chickens have outsmarted me on this as they can sneak into dense jungle I cannot follow haha.  I have considered confining them, but it would have to be a large pen and covered, because they can fly right out of anything I've tried to keep them in thus far and really hate being confined.  They will kick up a fuss and try their best to escape (and have so far succeeded, which is why they're free-range now).  I like your idea of having an enclosure that you put the food and treats in twice a day, perhaps if I did that and got them used to it, I could confine them during the time its most likely for them to lay eggs (when is that, morning??) and hopefully get them using nesting boxes, but let them out to forage for the rest of the day.  I really want to get some baby chicks and raise them to be comfortable with humans, which would make this process much easier I think.  Thank you for your insight!
Niele da Kine
Posts: 70
Location: Zone 11B Moku Nui Hawaii
27
posted 11 months ago
The chickens here cackle a lot when they lay an egg, so we can eventually locate their nests.  We have one hen who's half domestic breed (white leghorn hen) & half feral rooster of some sort.  Since the sire of our feral hen was a feral rooster and not a domestic rooster, the hen lays like a feral hen even though she's only half feral.  It's the hens sire who determines the laying habits of the hen, is what I've been told.

She sleeps in trees, hides her nests and in general acts like a feral chicken.  Once I find her nests, I'll take several eggs and mark the ones remaining.  The next day or two, I'll take the marked eggs and then mark the new ones.  She will continue to lay in the same nest as long as there's some eggs left there.

I'm also in Hawaii, like Su Ba.  Here, we have mongoose which are a problem.  I've built nesting sites up on posts where they chickens can jump up into them and the mongooses can't.  Maybe something up on metal fence posts would be something rats can't climb into?

I've also had good luck with putting a nesting site next to their feeding site.  We'd put out a bit of feed in the mornings and they'd lay eggs in the box at the end of the feed trough.  Which was attached to the house just outside the kitchen window so we could easily feed them and collect eggs.  Chickens are pretty adaptable to many situations.

Maureen Atsali
pollinator
Posts: 453
Location: Western Kenya
62
posted 11 months ago
If you know a hen is laying, and you confine her you can observe her becoming really agitated when she wants to lay.  Pacing the fence, looking for an escape.  Let her out at that point she will generally make a beeline straight to her nest...and you can follow at a distance to find the spot.

posted 7 months ago
Update!!
I finally managed to find one nest, due to the advice to listen for the hen to cackle. And she made it inside a covered foyer next to the house. Now my semi-feral hen Universum lays an egg about every day and always makes a huge deal about it so I know when to check haha.
I also have five 4 month old hens, and four 3 month old (hopefully) hens that I’ve reeeally tamed, so tho they are wild and always free range during the day, they return to the house at night or whenever I call them. Right now they sleep in a pallet house we made in our bedroom, but soon they’ll have their own outdoor coop with nesting boxes. They’re all mixed breeds and It’s so fun to see what characteristics they develop as they grow up. I’m not sure how soon they’ll start laying but I’ve heard 6 months?
5827FFA5-20A0-4029-8E0B-38D59820277F.jpeg 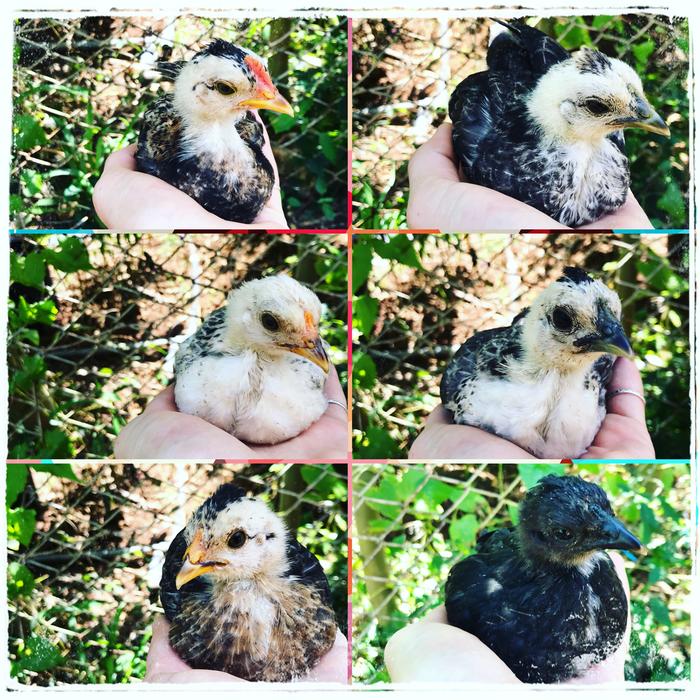 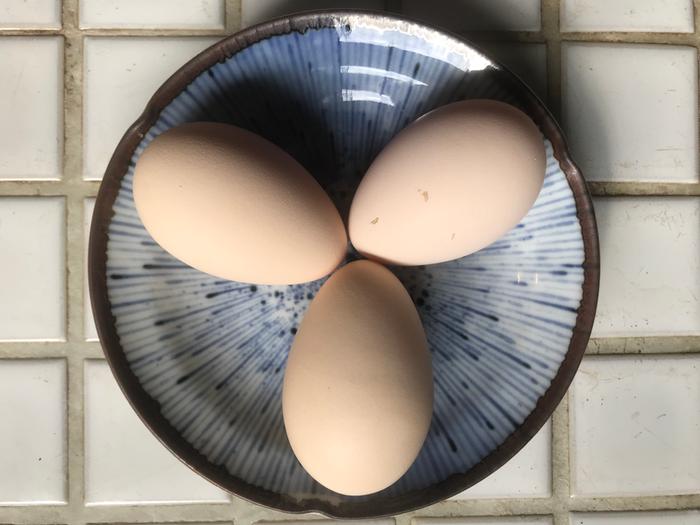 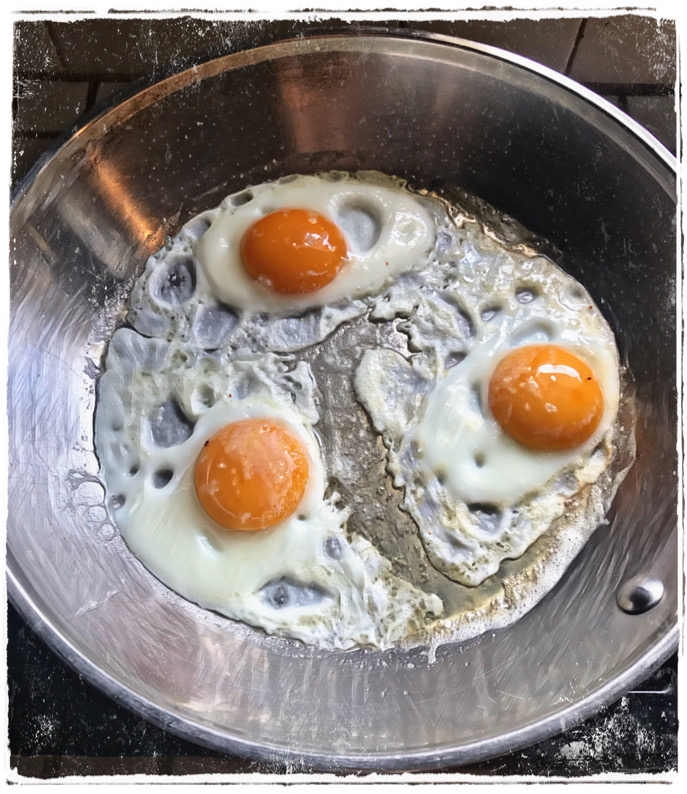 posted 7 months ago
And thank you all for your advice! 🖤
I am really loving raising happy jungle chickens!  They are such characters.