I've gotten stewardship of a small triangle of land (see attached photo) and would like to grow some edibles on it. I've heard and read a fair bit about permaculture and seen a few examples, but I have next to no hands-on experience (not with other kinds of gardening either).

I also don't have much time or money or tools ^_^ This is a low-key side-project for a few years, not longer (could pass hands though).

I'll happily learn by trial and error. Still I'm a bit at a loss as to how to start, looking at the plot, so if any of you have instant thoughts to share when you see the photo, I'd be grateful to hear them.

In addition to the info marked on the pic:
* This is the south-east of England.
* The land in front of the fence has to remain a lawn.
* The panels on the right used to extend all the way to the back of the triangle but were blown down by the wind. There was ivy on and brambles in front of them; also brambles next to the wire fence on the left. These have all been cut down: that's what's lying in the front of the photo. I've noticed songbirds being attracted to this jumble of branches, so I'm thinking it might have a place in the garden?
* There were nettles all over, too.
* As you can probably tell from the coordinates, it's quite a sunny spot.
* The soil is fairly sandy, I think?
* The neighbour is growing potatoes and leeks, and other things (not permaculturally). Apparently bell peppers grow well, too.
* The beds, hidden behind the panel in the pic, had various herbs in them, fennel for one, which was still growing last year.
* The 'pond' is less than a square metre, plastic lining, some water insect life.
* The pile at the back is mixed soil and rubbish - I'll sort through it for useful things.

So... where to take this? I could just go and buy leek and pepper seed etc, and a bag of potatoes, and plant it all next to one another.... but is there something a little smarter/more interesting to try? 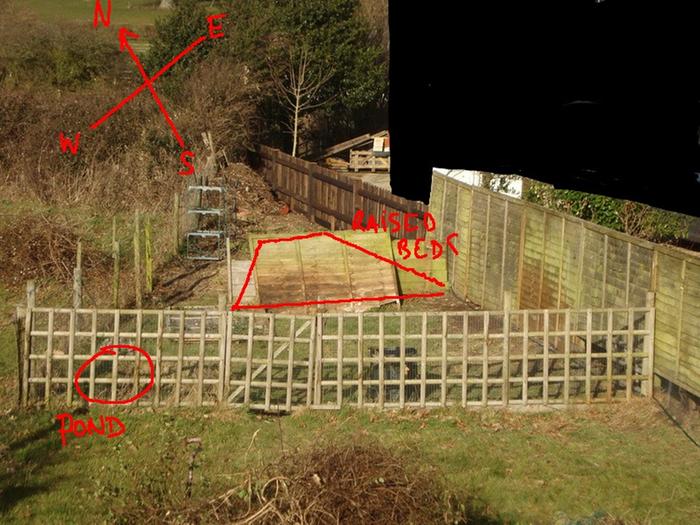 Scott Jackson
Posts: 37
Location: Córdoba, Argentina
posted 8 years ago
Since you've got some vertical surfaces (fences, etc...) you could plant climbers such as black beans and train them up the walls. The black beans are also nitrogen fixers, so if you want to change your plot next season, the beans will have improved the soil everywhere you planted them. good spacing is about 10 inches apart, 3-4 inches out from the wall or fence where they are intended to climb. They should be planted about 1 inch below the surface and covered with light mulch (leaves, grass, etc..) to help preserve humidity and help them to germinate. Covering the verticals with all of that lovely foliage also makes even a small space look extremely productive and vibrant.

As for the main portion of the triangular plot, ask around if tomatoes grow well in the neighborhood. If the spot is going to receive a lot of sun you can't go wrong with a productive patch of tomatoes. If that's the case you may want to start the plants from seed inside your house and transplant them when they're about 6-7 inches tall.

Scott
Scott Jackson
Posts: 37
Location: Córdoba, Argentina
posted 8 years ago
Companion planting for the tomatoes, or other crop that you grow there, could be an edible aromatic which also attracts beneficial predatory insects. I've had very few pests around my tomatoes since planting a bunch of basil around them. The basil flowers are very potent attractors, and of course the leaves are always tasty in salads, sauces, and numerous savory dishes...

Thinking in terms of perennials, you might consider a few bush-height fruit bearers, such as blue berries, which could go here and there along the fences. This would allow access to the triangular patch for tending to annuals or whatever else you put there.

One thing Bill Mollison said about diversity, which I think is especially important to consider in small gardens, is the importance of diversity of function. He said [and i paraphrase] it's not so much important to have a huge diversity of plant varieties within your design, but a huge diversity of functional inter-relations within the plants you selected. You when you start thinking about what you want to plant, imagine the ways that their inter-relations can provide additional [i.e. "stacked"] positive functions to the system. Putting in a functional diversity will help keep the space dynamic, self regulating, and will also appeal to the viewer/gardener's sense of harmony and life.

Wow - thanks a lot! Those are some great concrete suggestions, both for getting produce and making it look/smell/feel good. I'll try them. Just raked up two rubbish bags' worth of dry leaves for mulch. I hadn't thought of that, even though it's obvious. I don't have a car so whatever can be used on the spot is good.


blue berries, which could go here and there along the fences. This would allow access to the triangular patch for tending to annuals or whatever else you put there

It's actually not that small a plot - the photo's perspective may distort it a bit. The front fence is only some 4m wide, but the triangle is a good 10m deep. Enough for me, I reckon. I noticed today that on the right hand side where the fence panels are (and beans might go), the ground slopes up a foot or so. Not sure if that can be used to some advantage.

Finally, the raised beds (hidden in the pic) are four separate plank-rimmed patches. I'd keep that, or is there a case against it? Could also leave the panels in front to create a shade - but what thrives there?
Scott Jackson
Posts: 37
Location: Córdoba, Argentina
posted 8 years ago
Hi Mike -

It's actually not that small a plot - the photo's perspective may distort it a bit.

Yeah, I think I saw the plot is being smaller that it really is due to the angle of the photo.


I noticed today that on the right hand side where the fence panels are (and beans might go), the ground slopes up a foot or so. Not sure if that can be used to some advantage.

Absolutely. All of those little differences in features in the land create micro-climates and allow for more "niches" to be filled.

Another thing I thought about is the "solar wedge" idea, which means putting your taller plants toward the north end of the triangle and along the walls as well. This gives you the idea of a bowl of parabolic shape with the south facing edge empty or low, to allow for the southern winter sun to enter fully into the space and be absorbed by all possible parties. That would also entail not planting any tall or bushy perennials on the southern edge of the triangle, which would block the sun during the winter.

Have you thought about trees?