posted 1 year ago
Hello friend, I hope you and your loved ones are doing well.

I've been thinking about starting this thread for a long time now but with the new reality I find that most of what I wanted to say isn't relevant anymore. I got sick and I've been confined home for the last two weeks, next Monday it's back to work. For most people confinement is bad. To me it's a taste of what I hope to achieve one day. Now that I have to leave the safety of my home I thought it would be a good time to harvest some apples here on the forum. An apple a day keeps the doctor away :)

Year 2020 will be hard to top. In May I got the opportunity to move back into the family home. And now the pandemic... When I wrapped up the Black Bread Lodge thread I was depressed. Work was taking too much time an I had to let go of the garden. Moving on the land changed everything, I felt whole again. I mean, waking up to this, what more could a man want? Jan. 9th 2020 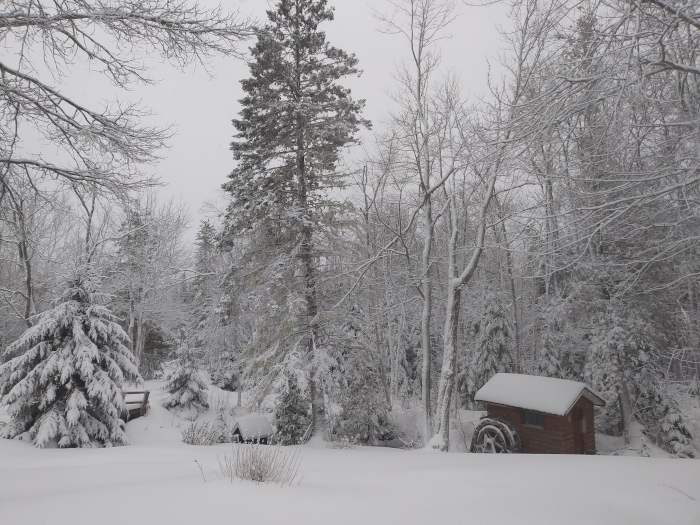 No reasons to be sad about the garden, a lot is going on even without my meddling. The Chives are growing, so are the Brown Eyed Susans, the Purple Coneflowers and the Columbines. The Rhubarb surprised me with flowers and seeds. The Wild Chicory, which I thought had disappeared, graced me with some of the most gorgeous flowers I've seen. After seducing me she then gave me tons of her seeds for me to spread. I can't say no! Some kind of critter feeds on the plant, I'll try my best so that they get their fill this year. More life please! Wild Chicory on July 30th 2019 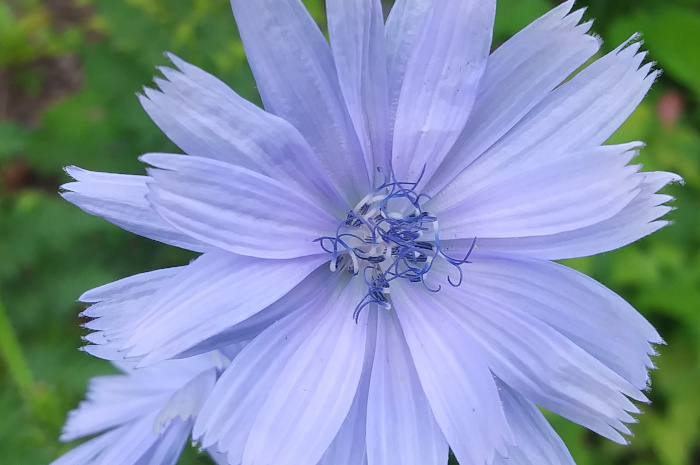 There are other plants with amazing flowers. The New-England Asters aren't doing well compared to the others. Still, one of them flowered and wow! So late though, in the last week of October. I feel bad for them as they missed most of the life. I'm wondering if they are late bloomers or if they just have a hard time. Having flowers this late was nice. I didn't notice any bugs feeding on the flowers but maybe eventually they will come. This was taken on the 21st of October 2019. 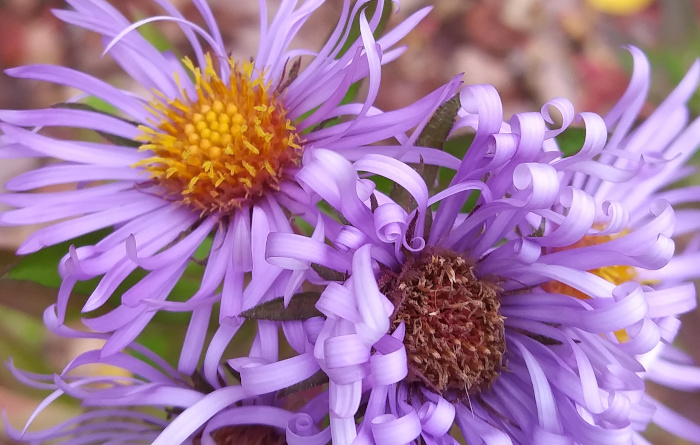 Some of my plants are spreading fast. I rooted out several Stinging Nettles and saw a lots of young Comfrey. My Comfrey makes almost no leaves (which sucks a bit since that's why I planted it in the first place) but flowers profusely and Bumblebees love them. For that reason I decided to let Comfrey run. The Milkweeds aren't doing that good, the swamp variety is by far the most successful and even gave me a handful of seeds. Another beauty, Purple Coneflower, gave me two cups of seeds. I'm not sure what I'll do with them. I don't even know if they are viable. Purple Coneflowers on August 20th, 2019. (Bumblebees like them too!) 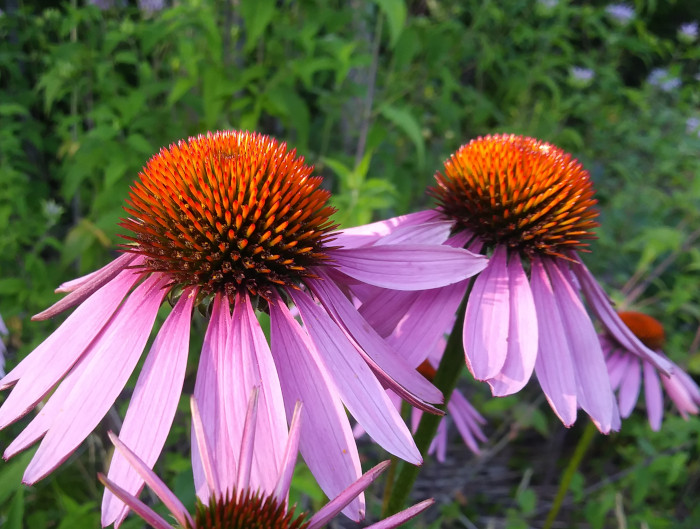 Wild Bergamot seems to be doing fine. I like to pluck a leaf to chew on while talking a walk in the garden. The plant smells nice and it is large compared with the other aromatics. I didn't harvest many leaves because at the time we didn't use them a lot. Now we use the spice in soups, on potatoes and on meat so we quickly ran out. Next year I hope to harvest at least 1 litre dry. The leaves tend to turn black when left to air dry, I might need to build a dehydrator to hasten the drying... we'll see. Living on the land gave me a reason to think about permaculture zones. It's nice to have spices close to the kitchen, the garden is too far away. Wild Bergamot gave me lots of seed maybe this spring I'll sow a couple closer to the house. The Wild Bergamot patch on August 20th, 2019. 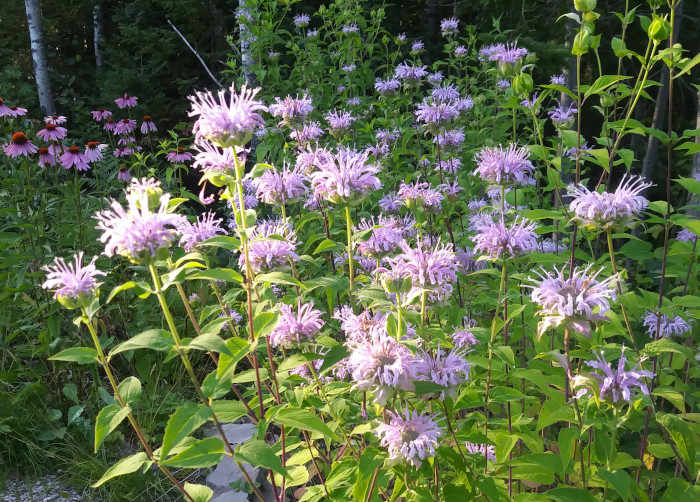 It's not just what I planted that stirs curiosity. The way the land reacts to my impulse of activity is teaching me a lot. Two wild Asters sprung up in the garden and they are much bigger than the New-England ones I sowed. There was also a giant plant that looked like a Dandelion but isn't. Its flowers were huge! Yarrow is spreading, lots of Goldenrod that I didn't sow, clover, grasses everywhere that I'm starting to tell apart. Sometimes I feel guilty about cutting all those trees to make space for the garden. But I see more life in the garden than I see in the woods, I'll assume I did good. Clover feeding a Bumblebee on July 30th 2019. 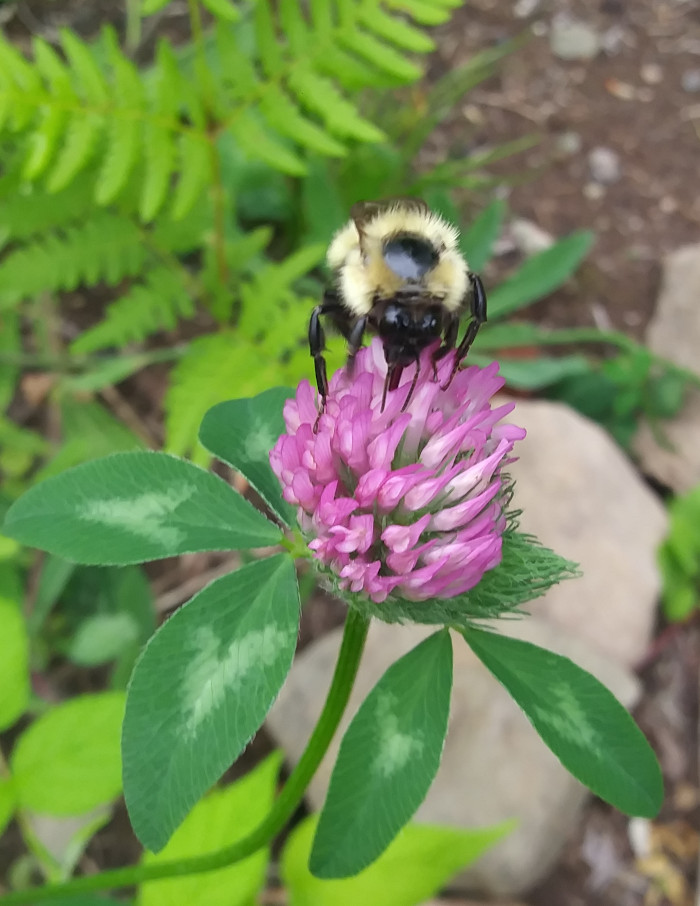 I've got lots more I want to write about but I'll stop here for now. Feel free to say Hi or to give me an apple for morale ;)

posted 1 year ago
Beauty!
I think the Echinacea's seeds will be viable. Root division is possible as well, but i don't know about the right timing. Spring or autumn.
Lovely those Bergamots! I build a dryer, but found a drying rack on an attic in a barn to be of more use. Safe yourself the trouble!
Making more of what obviously already likes it in your pristine paradise might be the way of the least resistance.
That and transplanting wild abundunce found on forest strolls can enrich the property even further.
All the love and peace.