posted 1 year ago
I grow several different kinds of flowers in my veggie garden.  Everything I grow in the veggie garden is edible, so there are no mistakes.  I grow them to attract pollinators, help attract good bugs and repel bad ones and because I think it looks pretty.  In one corner of one of my beds a nasturtium has self sewn.  The leaves are twice the size of any nasturtium I have ever had.  I can't wait to see if the flowers are the same or different.  I love free flowers I didn't have to do anything to get, and as it looks at this point better then the seeds I planted last year.  It makes me wish I would have collected at least some of the seed I saw everywhere last fall.  Borage also self seeds everywhere.  I don't mind.  If it pops up some place I don't want it, I transplant it, or pull it out and throw it in the compost pile.  Man do the bees love it, especially now when there isn't as many things blooming.  Happy planting

posted 1 year ago
How you describe your volunteers is how I would like my herb garden to go...eventually...when I actually plant it later this year.  I have a section the length of my house that I'm going to sew medicinal and culinary herbs.  I'm hoping they find the spots they like best and grow intermingling each other.
Tim Kivi
pollinator
Posts: 362
80
posted 1 year ago
I didn’t try regrow last year’s nasturtiums because I want the bushy variety rather than the trailing kind, so I dumped a thick layer of wood chips over them half a year ago and forgot about them. Now I have baby volunteer nasturtiums growing everywhere.
image.jpg 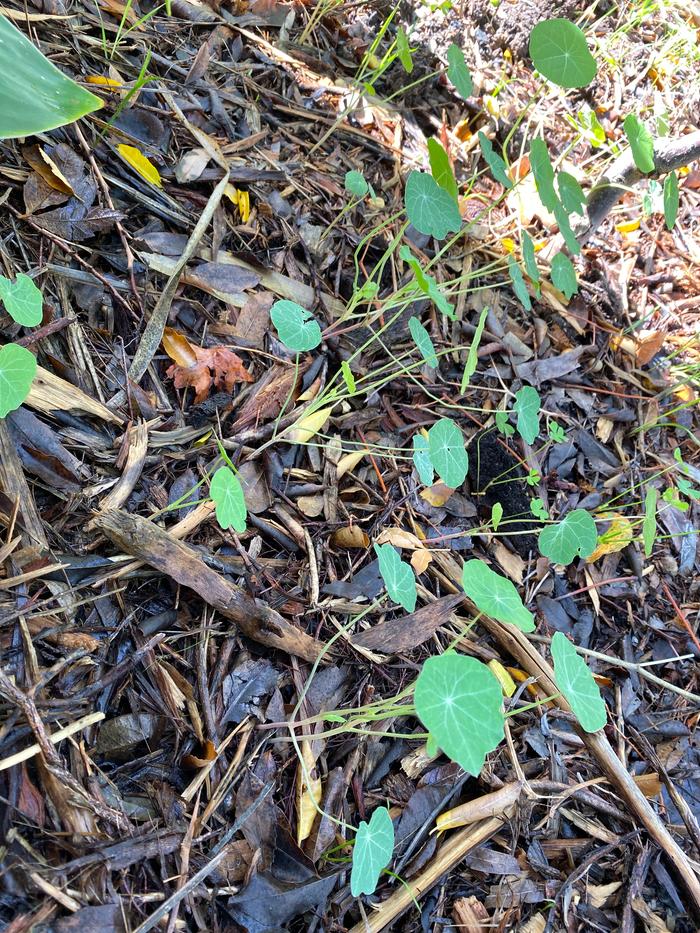 Sionainn Cailís
Posts: 63
Location: 5b Ontario
35
posted 1 year ago
That sounds great! I love finding freebies popping up! Nasturtiums are so cheerful, too :) The calendula I planted into one of the vegetable beds last year has also reseeded, even though I thought I had harvested all the flowers. :D

I have columbines that supplied themselves shortly after I moved in, and I left them in the corners of the pathway where they first cropped up, and now every year I get more freebies off them. Now I have white, pink, AND purple columbines (It started with just purple).

This is also the second year in a row that my Dusty Millers have come back from winter. They are sold as annuals here in my 5b area, but I guess they are saved from freezing by all the cedar mulch, leaf mulch, and snow over winter. They aren't edibles either, but it pleases me greatly they have stuck around as perennials. They also grew much bigger and flowered last year with lovely yellow flowers, which I have never seen before.

Erin Alladin
Posts: 12
Location: Ontario
4
posted 1 year ago
Few things make me happier than having so many nasturtiums that I can eat all I want and not leave them visibly depleted. Here's to all self-seeding (desirable) flowers!
Jen Fulkerson
gardener

posted 1 year ago
When ever someone new comes around my kids feed them nasturtiums.  They are so fascinated you can eat them.

posted 1 year ago
I love nastys! I have to start them inside as it's really too cold for them here.
Last year I dried a few hundred seeds (the ones that I didn't pickle) but when I started them this year maybe 3/4 grew mould and were not viable.
Does anybody have a good seed preservation for these beautiful, edible, useful flowers?