I was watching the ants (new to the spot) busily running up and down my peach tree today. I couldn't figure out what they were doing. One ant appeared to be, not eating the leaves, but scraping the edge of the leaves with its mandibles, which struck me as counterproductive to tree health, what with diseases that could enter through abrasions and pests that would be attracted to the micro wounds.

I know that there are a lot of different varieties of ants, we must have 5-10 varieties in our back yard, but other than the obviously harmful ants like fire ants and carpenter ants, I don't know a lot about them. I know some herd aphids, and most of them eat small or injured bugs and critters, and some create direct damage to plants.

Any ideas on what these ants were doing to my tree, and if they will harm it?

Also, I've read that peppermint wards off ants. Does anyone know if that works with all ants or just with some? I can certainly ring my tree with peppermint if the ants are harmful and the peppermint does ward off ants. I was planning on including it in my soon-to-be peach tree guild anyway, just not quite that much.

I also have a sour cherry and a Stanley plum and a bush cherry, which is why I said fruit trees, but the ants haven't seemed to have found them yet, or are ignoring them.

Varina Lakewood
L. Jones
Posts: 80
Location: NW Mass Zone 4 (5 for optomists)
posted 8 years ago
They are generally farming aphids (which tend to match the green of the leaves and can be hard to spot) and as such I consider them "not helpful" and get out the tanglefoot. I suppose it could be possible that yours are directly going for sap from the leaves - I'd still call that not helpful and do something about it.

Peppermint has no effect on ants here - they happily build nests in it. Tansy supposedly does, but I'd suggest growing a patch far from anything you love too much and chopping/mulching with the tops to see if your ants care about that, or ignore it. It can be a tad aggressive. Mom put a bit in a flowerbed once, and we had a monoblock of the the stuff taking over that bed for a long time. A serious effort was required to remove it. I can't recall if that actually affected the ants there.

Muddling towards a more permanent agriculture. Not after a guru or a religion, just a functional garden.

Nick Garbarino
Posts: 239
Location: west central Florida
posted 8 years ago
I leave most of the ants alone, but when I do feel that I need to remove some from an area, I use a formula derived from aerobic compost tea, orange oil, and molasses. Just add 2.5 tablespoons of each to 1 gallon of dechlorinated water. Use fresh, concentrated compost tea. This solution burns the ants (orange oil) and covers them will millions of microbes ready to chew them up with some molasses for dessert. It leaves no toxic residue and it works very well. It does not harm plants, so you can pour it right on the ant bed even if it is in the middle of some nice veggie plants.

Brenda Groth
pollinator
Posts: 4437
Location: North Central Michigan
26
posted 8 years ago
i too generally leave ants alone, as they are great bird food, however, if there is an ant nest that has to be removed, I use boiling water down it

Varina Lakewood
Posts: 116
Location: Colorado
2
posted 8 years ago
Thank you all for your thoughtful answers. They are definitely going in my notes.

No, no tansy! <laugh> My guilds have to meet two criteria beyond the basic 'helps, not hurts': Entirely edible (yes, I know, go ahead and laugh), and Visually pleasing (aka, neatly arranged+no 'weeds' that my dad or mom will freak over. We've had an eight year arguement over clover before I gave up and said: 'Fine, no clover, let's go with yellow sorrel.') It sort of limits my options, but, eh, it makes an interesting challenge.
This is what I've more or less decided to put in my peach tree guild:

Possible:
Strawberrymint
Kathy Burns-Millyard
Posts: 75
Location: Arizona low desert
2
posted 8 years ago
Ants have been at my newly planted plum trees along with just about anything else I have growing right now. They appear to be leaf cutter ants. They slice off half moon shapes from just about any leafy plant they can find. They farm the leaves to feed the fungus they grow. The fungus is their food and leaves are compost for that. I'm in Arizona and I've recently learned they're apparently common in the southwest.

Dale Hodgins
Posts: 9002
Location: Victoria British Columbia-Canada
670
posted 8 years ago
This humming bird feeder has a water filled ant guard. Not something I'd try with trees. A reallly big version of this would breed mosquitos. Some sort of goo or a little salt in the water might help.

After the squirrels figure out this feeder they'll be able to rince with water and preserve their teeth. 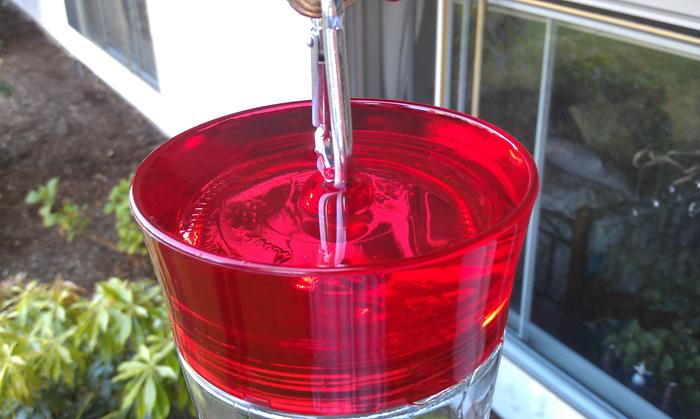 Varina Lakewood
Posts: 116
Location: Colorado
2
posted 8 years ago
Owch. Sorry to hear that, Kathy. Maybe you can get some fresh leaves and pile them between the ants and your plums? Or somehow get rid of the ants? I don't usually propound getting rid of the wildlife, but, eh, your poor trees!

Lol, Dale.
Nice pic. Haven't seen one of those feeders in ages. Probably people are afraid of attracting yellowjackets.
I think around here that mosquitoes would breed just fine in that little bit of water, darn things! Though, yeah, probably the salt or goo would work. Not eager to find out, though. I hate those little suckers.
As for squirrels, geh, they are curious, they'd probably bathe in it, or push a chipmunk in to drown (tiny little things around here.) They found my strawberries a couple days ago. <laugh> Fortunately they tried the sour ones and apparently didn't acquire a taste for them. But I hastily covered them with pea netting, which has worked in the past and is working now. One of their favorite tricks is to pull up the onion sets to look at them and either toss them aside or put them back upside down.

Update: No idea why, but there were no ants today.
Maybe the baby praying mantis found them. Or some other predator. Or maybe its because I watered today and yesterday both. Or maybe they noticed the mint? lol. doubtful, since they were running in a straight line that totally missed the mint. ...Or maybe they found the compost bin with fresh compost in it. I should check...
Whatever, I'm keeping my fingers crossed on this one.
Also, my dad didn't freak when I mentioned planting dandelions under the peach (though not sure how hard he was listening), a good sign! Now, to check on kale and carrots as companion plants.