posted 4 months ago
I found an ear of popcorn lurking in the back of my kitchen cupboard last spring, it was a couple of years after it's best before date so proabably around 5 years old in total and it had not been well stored.. but I thought I would have a go at growing some and so I planted around 30 seeds, and to mu surprise around 28 of them grew! so now I have just harvested some and there are a few different types and an issue or two.

There is a large field of fodder maize around 100m away so cross pollination is quite probable. how would that be likely to show up, on the second cob across you can see a couple of yellow corns are they the fodder maize's babies? the new cobs have two different  colours, the slightly rounder redder ones to the right and the pointed purple ones on the left (the far left is the mother) the sheen on them is not as noticeable in reality as the camera has made it look, is that sheen due to them not being as dry?

the far right cob has some grains that have split (pre popped!) I notice that has only happened on the rounder redder ears and not at all on the purple ones, any ideas what causes that to happen?

Since we have terrible weather for any form of dried maize and I have actually managed to get some finished I would like to resow some of this, am I wasting my time with the fodder maize contamination? Or can I tell which ones have been cross pollinated?
?
DSC_0356-1-.JPG 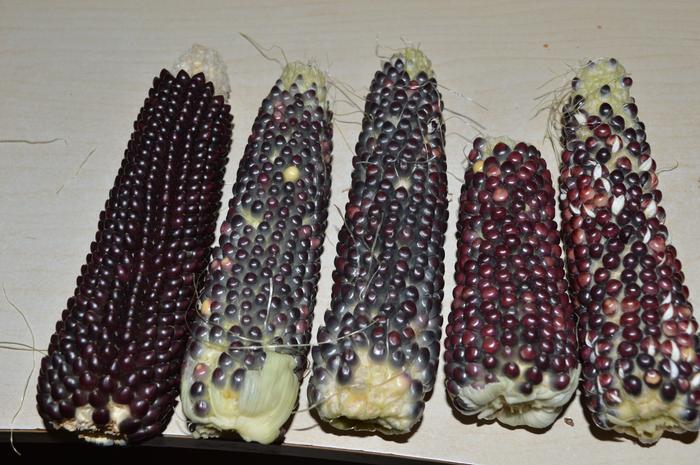 Any kernels that were pollinated by the fodder maize will be larger and softer. Instead of having a clear glassy interior when dry, they will have a white chalky interior. I would cull the yellow/white kernels just because they are off type, and might be crossed.

The split grains are due to the plant getting wet when the kernels were partially dried (rain?)