posted 1 year ago
I stumbled upon these cabin building instructions on page 113 of the July 1905 issue of American Homes And Gardens ( link ).  The advice all seems basically sound (if you can find the logs) and I've never seen it laid out so simply for such a primitive cabin.  I was struck by the labor-intensive suggestion to hollow out half logs and overlap them for use as roofing tiles, and also by the instructions for building an open fireplace and chimney entirely out of timber and mud/clay where stone is not available.

The article is also nicely illustrated with photos like this one: 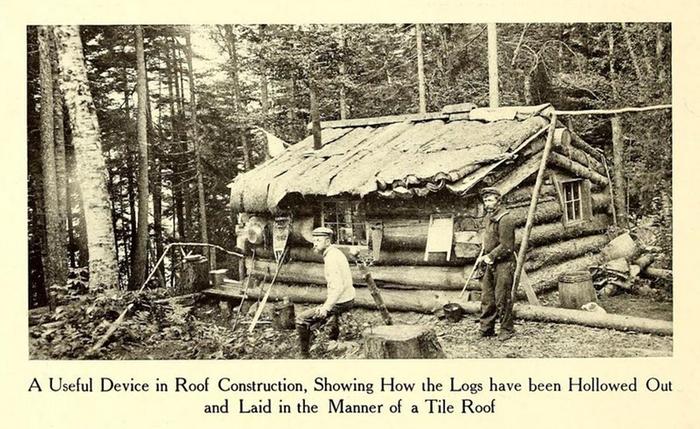 Here's the relevant excerpt from the text; the complete article, accessible via the link, is longer, because it covers a variety of more primitive forest camping structures too.


The building of a log cabin is a very simple task. An expert axman will probably construct it in a couple of days, and even a novice could do it in a short time, the only tools project beyond the corners of the cabin, and for this at least one foot should be allowed at each end of the building. It will make the log house more durable, though it would rob it of much of its charm to peel the bark from the logs. This can be readily done in the early summer months, and the bark can be flattened out and used later for roofing purposes. The bare logs are soon weathered to a soft gray tint which is not unpleasing to the eye, and which blends with the coloring of the surrounding forest. The chief objection to leaving the bark on the logs is that it offers a home for all breeds of ants and wood-boring insects. However, if, despite these objections, it is desired to keep the logs in their natural clothing of bark, it will be found preferable to build a cabin in the latter months of the summer, for then the bark will adhere better to the wood.

First choose two of the largest logs and lay them at the front and the rear of the cabin. They should be flattened along the bottom, so that they will rest squarely on the foundation. Notches should be cut in each log about a foot from each end. Then a pair of logs should be rolled across them for the beginning of the side walls. The side logs should be rolled to such a position that another half turn would drop them into the notches in the logs below, but before giving them this final half turn they should be notched on the upper side, so that when they drop into position these notches will fit over the notches of the lower logs. After these side logs are in place they are notched at the ends to receive the next pair of front and back logs, and so the work progresses until the walls are carried up to their full height. The notches are all cut to a depth of about one-quarter of the diameter of the log, and as the logs are notched on both the upper and the lower sides, it will be evident that there will be no gaps between the logs on the side, except such as are due to irregularity of shape. When building up the walls, it will be found best in practice to lay the logs with their butt ends alternately at opposite corners of the building. It will be very difficult to find logs of a uniform diameter throughout, and by thus alternating the positions of the large ends the walls will rise evenly all around. Some cabins are built with the logs flattened at the ends, but they are not quite as strong as when the logs are notched, because the only thing that prevents the walls from being pushed outward is the friction due to the weight of the timber. There are, besides these, many other ways of joining the logs at the corners, but most of them are rather difficult for an inexperienced man to practise.

The method of putting in a doorway or window is apt to trouble the uninitiated. When the walls have been carried up to the height of the desired opening a piece corresponding in length with the width of the opening is sawed out of the top log. This leaves a space large enough for inserting a saw so that the remaining logs can be cut when desired. The sawed log may be temporarily stayed by a cleat while the walls are being built on up to their full height. When the top of the wall is reached the next two logs are notched in at a short distance back from the edge of the wall. These are connected by cross logs as usual. And then the next pair are laid still further in from the edge, and so on until the final central log is placed in position and serves as the ridge of the roof. Light poles may be laid across these roof beams to serve as rafters. The rafters may be held in place by a light log laid across them at their lower ends, as shown in one of the illustrations. The rafters are covered with pieces of bark, which are made to overlap each other, like shingles. In one of the cabins illustrated a rather novel tile effect is produced by using for the rafters logs split in two with the central core removed. These trough-shaped logs are laid in place in a regular
tile fashion, so that rain will be shed from the round of one into the troughs of the two at each side. At the ridge the joints are covered by an inverted trough-shaped log. For further protection the logs are covered with bark. When the roof has been laid the openings for the doors and windows may be sawed out after first nailing a strip of wood to the logs along each side of the proposed openings to bind them in place and prevent them from buckling out of line. These strips, however, are only temporary. A permanent binding is provided by nailing jambs against the sawed ends of the logs, and the frame of the door is then completed by adding a lintel and sill. A rough door may now be constructed of wood slabs or boards battened together. For a hinge two pins may be used nailed respectively at the top and bottom of the door at one end, and fitting loosely into holes in the lintel and sill of the door frame. Glass for the windows is somewhat of a luxury. A primitive substitute is oiled paper, which admits plenty of light and also prevents rain from beating in. The chinks between the logs of the cabin can be closed with pieces of wood, rolls of bark or a plastering of mud. A flooring of logs split into slabs will be found an acceptable luxury, though it is not necessary on well drained ground.

No log cabin is complete without an open fireplace. A stove is very much out of keeping with a primitive dwelling. Its dead black walls lend no poetry to the surroundings. A large open fireplace should, by all means, be constructed. For this purpose an opening should be cut in the rear of the building and framed in the same way as a door or window. If stones are plentiful, a chimney of rustic masonry can be built up on the outside, using mud or clay for mortar. With such a chimney it will be found best to use only flat stone, because the binding power of the mud is not very strong, and where the fire opening comes in contact
with the logs of the cabin a thick lining of clay should be applied. Where stones are not available, the frame of the chimney can be constructed of logs and sticks, notched and built up like the logs of the main building. A lining of clay at least twelve inches thick must cover the wood. The chimney should be carried well above the gable of the cabin to insure a good draft in any direction of the wind. The fireplace may be raised a little above the floor of the cabin and framed in with large logs well plastered with clay.

For a bunk a pair of logs are laid parallel on the floor, and the space between them filled with hemlock or balsam boughs, or the latter may be supported on stout sticks laid across the logs. But of the making of camp furniture there is no end...

posted 1 year ago
That is a great story

posted 1 year ago
I love old stuff like this. Imagine how many people today would believe it impossible to build a cabin without power tools.