posted 1 year ago
I like spiders. Around here they come in two types, indoor spiders and outdoor spiders. Not as many different kinds indoors and the woman isn't fond of them at all. I don't mind them too much and generally try to evict rather than kill if I have that option.

Outside though is where all the really cool ones live. I like the big yellow and black ones that build their webs out in the weeds and go bounce, bounce bounce if you disturb them, we used to try to feed them when were kids but they generally weren't much interested, mostly they just bounced. Then there the big ones that live in the gardens and wood piles. They look like little tarantulas and often have a bag ball full of babies hanging off their butt. Reminds me a little of Santa Clause except the bag is full of baby spiders and hanging off their butt and also they are spiders. I don't think they keep lists.

Then there are ones that build funnels in corners of things and run don in and hide if you get too close. And the little teeny tiny ones that like to live among flowers like those of carrots or onions or inside flowers like beans or tomatoes. They come in a range of yellow and green and have much larger legs in front than back.

I think over all my favorites are wolf type spiders, the ones that hunt instead of trap. It's really cool to see one leap on and kill a fly. They come in a range of colors too. One named Mildred lived in my mail box for a season. She was mostly grey with bright blue embellishments and would sit on the mailbox door and look at me. I swear she looked right in the eye.

You might know there are wasps that eat spiders. Not just one kind of wasp or one kind of spider. I see them every now and then, the wasp dragging some poor spider through the grass to who knows where. Did you know that those poor spiders aren't dead when they get dragged off? Well they're not, if fact they can live for days in a comatose state for days after a good dose of wasp venom. You can keep them to see if they eventfully wake up, they don't. Also if your weird enough you can pose them in various postures for portraits gently using a toothpick to position their little legs, that's what happened to the one below.
Spider_smaller.jpg

Nothing ruins a neighborhood like paved roads and water lines.

posted 1 year ago
I'm a terrible arachnophobe, but I did have some pet spiders who I named because they were cute (and stayed outdoors). Ms. Sunshine took up residence in some yellow flowers (edible chrysanthemum). Her daughter, Rosie, chose different flowers to reside in. Some of their relatives were white or greyish, living on white flowers. Unfortunately, these Misumena crab spider eat pollinators so I started throwing them outside. You can watch them sit on a high flower, camouflaged, waiting for flies and bees, and ignoring the aphids right below them.
Pink-Crab-spider-Misumena-spp-on-bachelors-button.jpg 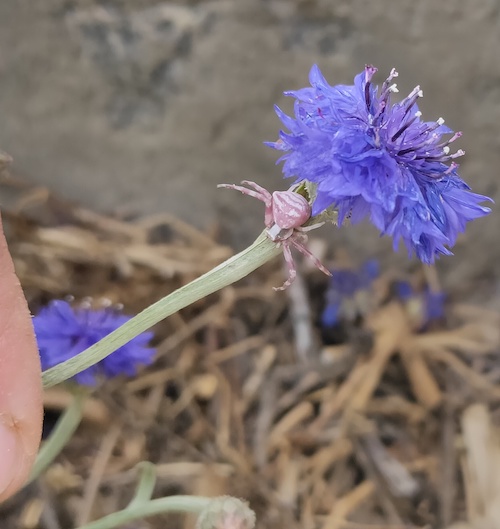 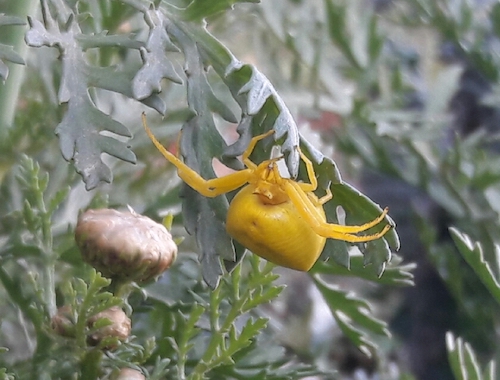