Question about using willow in water

Wouter Gijbels
Posts: 3
posted 1 year ago
Quick situation explained:  we bought a property with around the edges a water draining ditch that lets rainwater flow away.  During the winter months its filmed with water constantly(for about 5 months),  after that its dry unless theres rainfal.  We have sown grass in it to prevent heavy erosion.  My neighbor has a 400ft woodshed that has no gutter and the water falling off the roof is destroying the ditch.  We used concrete plating to try and prevent the erosion,  whuch works but is a bit too expensive for the entire ditch...

my thought now was planting willow trees on the eroding edge,  every 6 ft,  pollarding them so they dont get too big,  and weaving willow branches between the trunks(horizonally),  filling up one side with dirt.  So the branches should theoretically root and start shooting and i could treat it as a hedge,  pruning it yearly.

What do you guys think of that?  Would it work?  Would the willow thrive with the 5 months of being submerged?  What will happen with the horizontal branches when they start to get thicker? 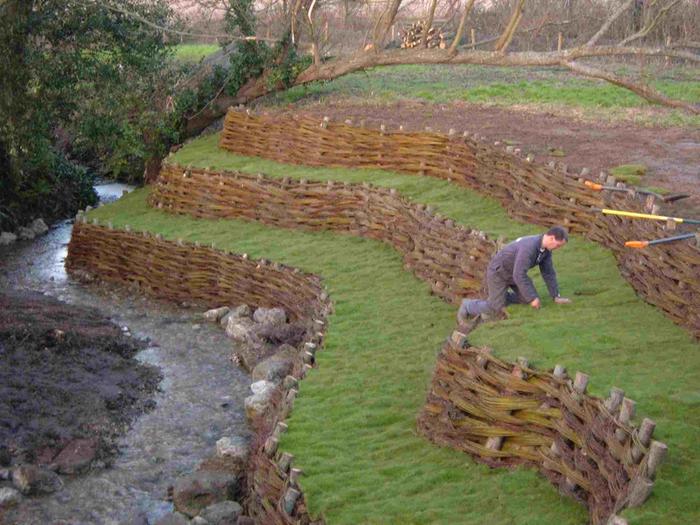 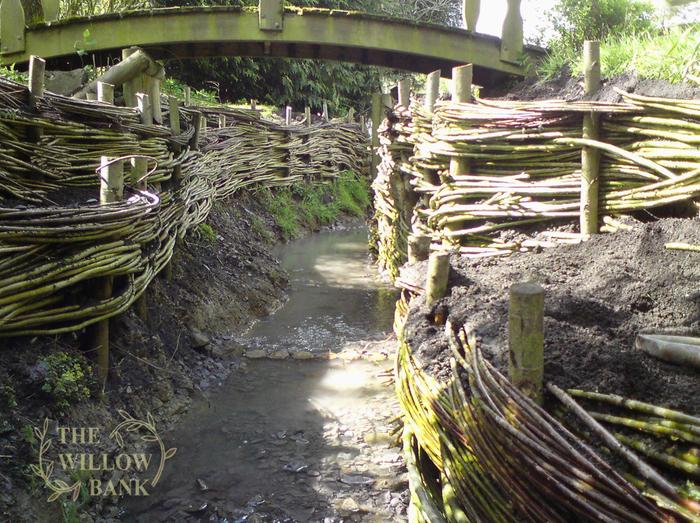 posted 1 year ago
Hi there Wouter,

Seems like we're dealing with a similar situation and thought process!
We've got a creek running through our property. The water is flowing all year long, but especially in late fall/ early winter the creek gets a lot more water passing through it, and it is clear that it is eroding the banks, carrying away valuable fertile soil with it. We have a few old coppiced willows standing next to the river that are in dire need of maintenance. We had the same thought of using a living willow fence to retain the creek bank and also to hopefully be able to raise the banks at some of the lowest places to avoid flooding in those areas.

We were thinking of a similar design as yours, but were thinking, instead of having the weave be the vertical posts with perfectly horizontal branches weaved in between, we were considering having the weaving branches be inserted diagonally, in a pattern similar to that of hedge laying, like this. 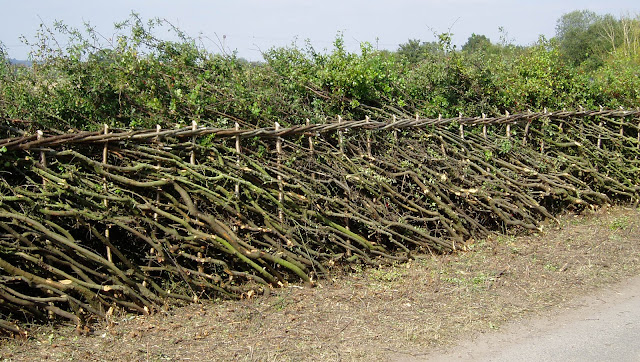 The thought behind this would be that the diagonal weaving branches are also inserted in the soil at the bottom, giving them as much change to root and avoid them from being washed away once they die off and become more brittle. Also having the direction of the diagonal branches in the same direction of the flow of the water, might cause less damage to the living fence if the creeks picks up speed and volume during the wet season, as the diagonal insertion of the branches might give less resistance to the flow of the water.

In any case, it's still a work in progress in our minds. I'd be very interested to see what you come up with in your situation! We're planning on trimming our willows next spring and planting them across the creek bank. Will keep you posted with the progress if you'd like that!
S. Bard
pollinator
Posts: 278
Location: Italian Alps, Zone 8
133
I like...

What do you guys think of that?  Would it work?  Would the willow thrive with the 5 months of being submerged?  What will happen with the horizontal branches when they start to get thicker?

I will add a picture of what i kinda mean,  but with living willow branches and poles instead of dead

I realised I didn't answer some of your questions in my reply. I am by no means a willow expert, but here are my thoughts/ observations

As long as the willows are not completely submerged they should do absolutely fine. One thing to note is that is that if willow branches or trunks get submerged for long enough periods, the tree will actually produce roots out of the side of the branches that are submerged. If afterwards the water level drops down again these roots that are now exposed to the air and sun, will die off again. I don't know if this might take down the whole tree with it if repeated for long enough, or if the tree will be unbothered by the roots die-off. Perhaps consider either planting your willows a bit outside of the ditch, so that they stabilize the bank without getting periodically largely submerged, OR plant your willows where they might get submerged, but arrange a number of rocks against the areas that you suspect will be submerged for 5 months and then dry for the rest of the time. In that way the roots will grow in-between the rocks and during the dry season might have a better chance to survive between the rocks and the soil trapped between them.


Wikipedia: Inosculation is a natural phenomenon in which trunks, branches or roots of two trees grow together. It is biologically similar to grafting and such trees are referred to in forestry as gemels, from the Latin word meaning "a pair".[1] It is most common for branches of two trees of the same species to grow together, though inosculation may be noted across related species. The branches first grow separately in proximity to each other until they touch. At this point, the bark on the touching surfaces is gradually abraded away as the trees move in the wind. Once the cambium of two trees touches, they sometimes self-graft and grow together as they expand in diameter. Inosculation customarily results when tree limbs are braided or pleached.

I suspect inosculation is actually part of the succes of a living fence as the plants merge they also create a stronger structure still. It also allows for these kind of awesome things to happen:

posted 1 year ago
Willow here manages with being submerged for 3-4 months at a time but it is dormant at that point that probably makes a difference.

posted 1 year ago
I tried weaving living willow, but whatever i did, it died back.
Seems there are many different willow varieties to chose from. Some varieties take kindly to humans messing with their branches, others just decide to self prune the branches i bent and grow happily new shoots elsewhere.
So please do the research properly towards what kind of willow varieties are suited before investing time and money in such an awesome project.
I've planted a lot of willows, mostly for basket weaving, but also on riverbanks, cows and deer like to eat them! Unprotected they might have a hard time getting established. Although when there is a lot of willow they seem to tire quickly of the taste before killing it off.
There's a lake where i live, wild willows do exactly what S. Bard describes, they grow roots if inundated, in winter those die back. Looks kind of messy because the tree seems to know till what level the water is expected to rise and invests in growing it's foliage higher than that level. The exposed died back root-mass has dead algae hanging from it. I personally find that kind of wildness intriguing, but not everybody else is inclined towards that edge of the beauty spectrum i've observed.
Any way, keep us posted pioneers!

Cristo Balete
Posts: 902
Location: In the woods, West Coast USA
160
posted 1 year ago
We have two different kinds of willows around a year-round pond, one type gets huge trunks and limbs and falls over.  The other is more slender with a million shoots on it that grow into slender branches.  They have their roots in the water for 7+ months a year, so their roots in the water are no problem.

So the type of willow seems crucial for what you are talking about.  You might want to check with people who make furniture with bent willow branches, those are the skinny types of willows with lots of shoots.

All of them grow like crazy, so you will have work to do on whatever type you plant.   While those photos you have posted look all great and under control, that is probably a short-lived, tidy view of those trees (if they were doing live trees)  Just picture hundreds of shoots coming off of every single one of those woven branches and the clipping/shearing you'd have to do.  A couple months later they are right back again.

Even though there might be moving water in the trench for less than half a year, if that water is not sinking into the soil the willows would be relying on ground water the rest of the time.  Is there enough ground water there the rest of the year, a lot - a lot -  of ground water?  What other trees/berries are growing in that area that would indicate almost saturated soil?

There are bugs that eat willow trees.  We have beetles that turn them into sawdust internally, and then they get very unstable.  That may not be the case everywhere, but it does happen.

Maybe if you post a picture of your situation we could see what kinds of alternative might work?

Wouter Gijbels
Posts: 3
posted 1 year ago
All of these replies are amazing!

I added some pictures that somewhat show the situation i found on my phone.

I intended on using salix alba.  Planting them 3 ft apart,  letting one grow to 10 ft,  then one just above the border,  then weaving branches in between them.  Excess shoots are alright,  i’d use the goats to trim them.   Also chose willow because they produce amazing amounts of pollen and nectar for our bees.

As four the ground water levels,  when i dig down 6 ft in summer,  the hole fills with water.  But i’n guessing 6 feet will be a bit deep for the horizontal branches i intend to weave in 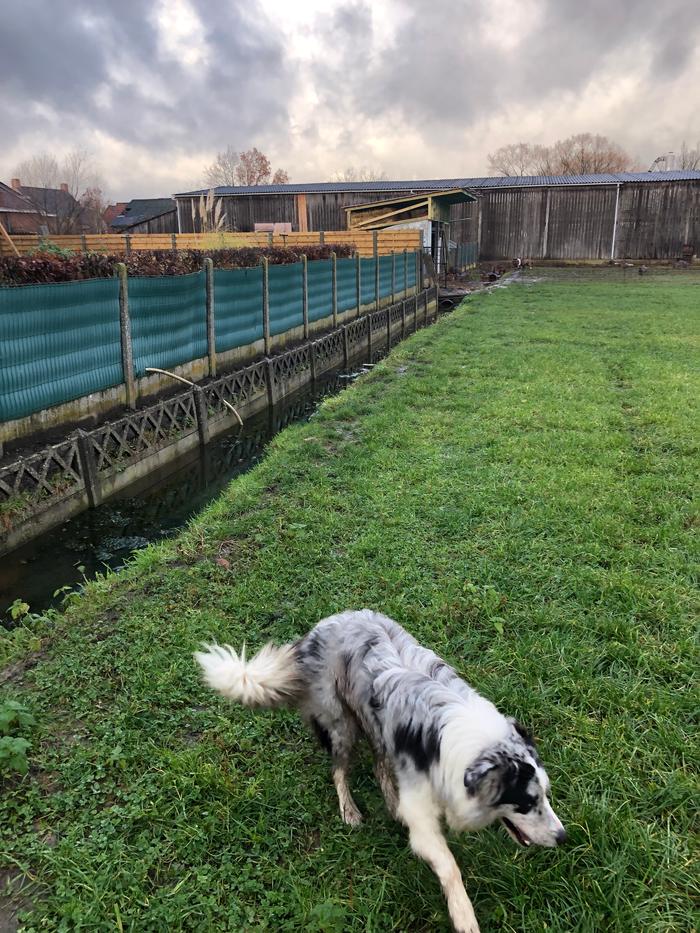 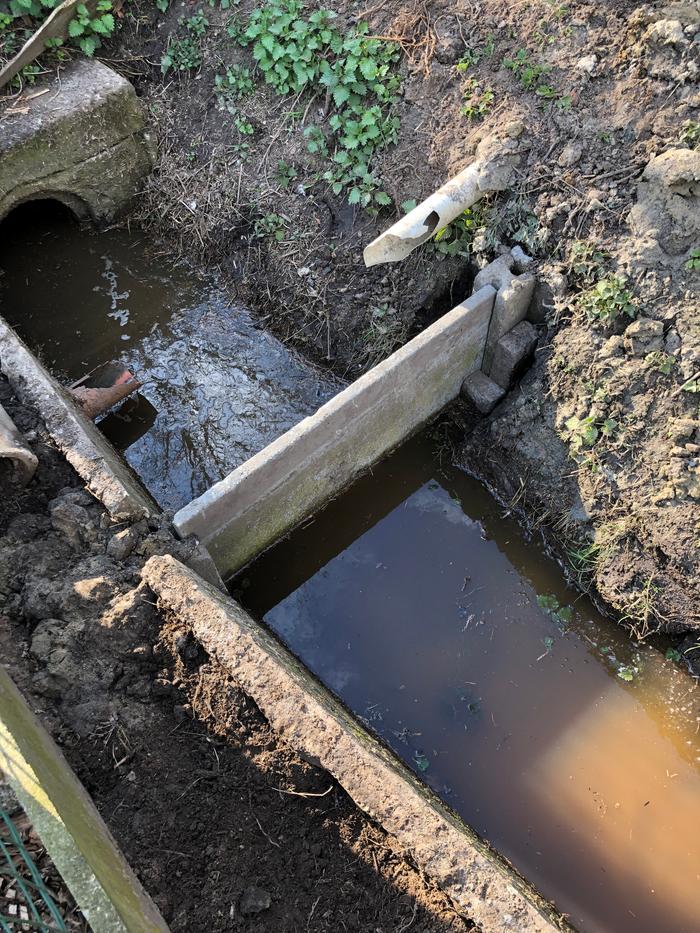 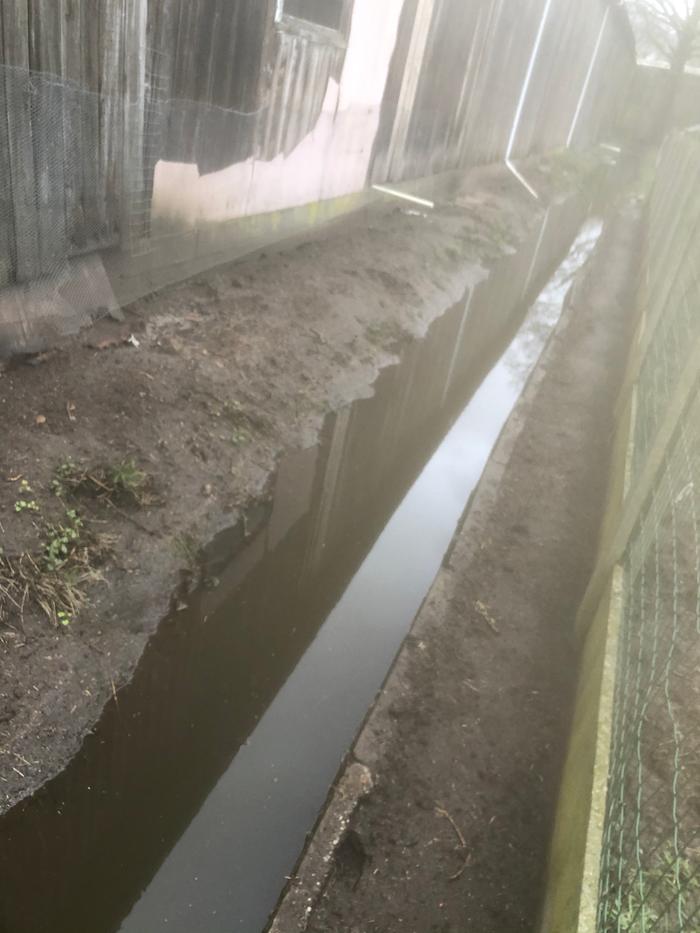