How to increase water retention in front lawn?

Noah Figg
Posts: 57
Location: DFW Area, Texas
1
posted 9 years ago
I have been considering how to increase water retention in my front yard, which has two small trees and grass and a downward slope toward the street.

I have been trying to figure out how to get swales installed but I would like to still be able to mow it normally. Here is a plan of my front yard and the contour lines to show what it's like. 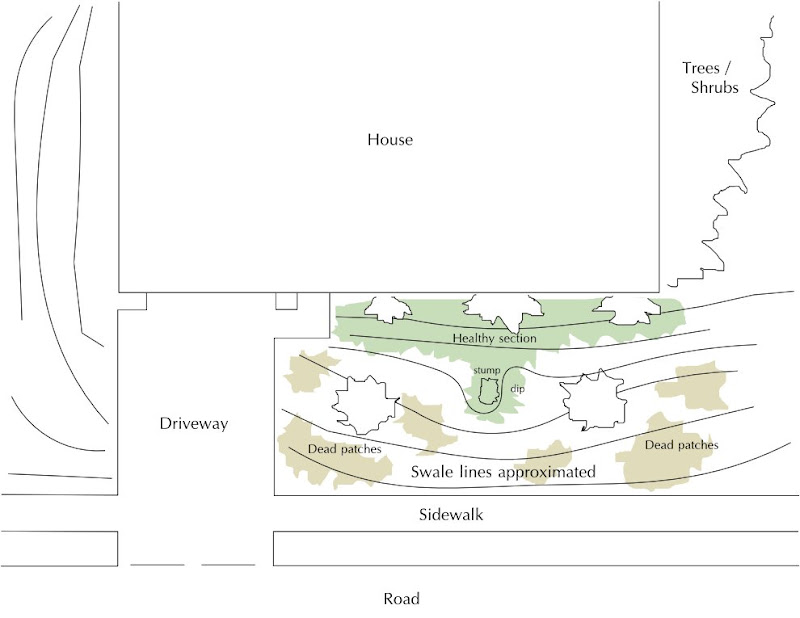 Can this be done where I can still mow it but it will allow the water to sink in rather than run off?

Is there a better way to increase water retention, such as digging post holes at regular intervals and filling them with porous debris/mulch?

FYI, I consider this the first step as I will eventually grow more than just grass here, but I have to convince my wife of that and ease it in for my neighbors' sake as well.

In North Texas, zone 8a. In the summer it often hits 100 degrees at the same time that rain is not frequent, except in storms where it tends to be too much. I need to slow that storm water down so it can soak into my lawn and not just the gutter. And I don't want to water the lawn frequently like my neighbors do, since that is a waste.

posted 9 years ago
Personally I suggest possibly excavating the stump and regrading the yard so that it dips down in the middle where the stump is (where the stump will no longer be) so that the front yard becomes one big basin in which water can collect during rains. It doesn't have to be super deep, just depressed relative to the rest of the yard, maximum one foot deep, maybe. If the sides are not steep, you should still be able to mow. Surround the basin with plantings of more drought tolerant perennials and annuals. This will make the lawn area smaller, but a better water collection site, in my opinion. This is if you still want a lawn there, otherwise a basin can be excavated with water-tolerant plants in the bottom and less water tolerant plants up the sides. 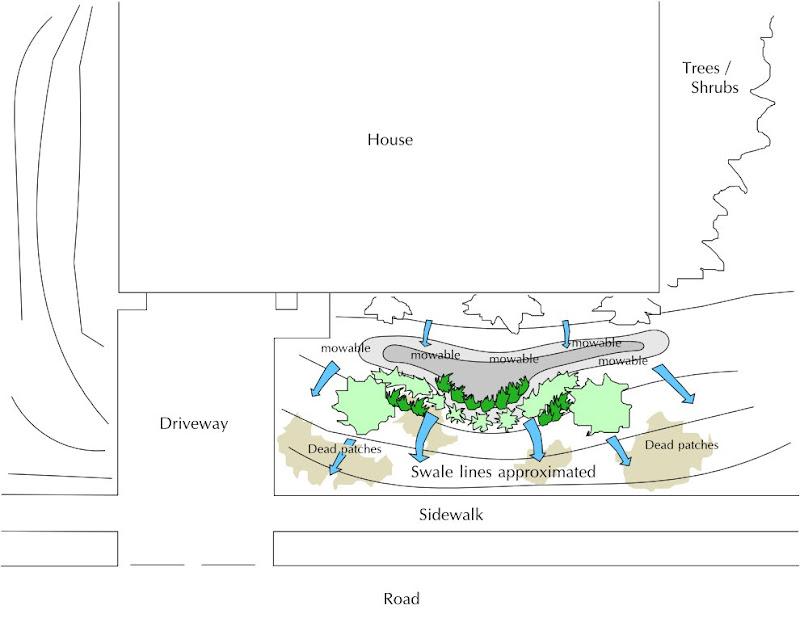 Brenda Groth
pollinator
Posts: 4437
Location: North Central Michigan
29
posted 9 years ago
if you do excavate out the stump and do as Tyler recommended..which sounds great..I would also begin to pile up stuff along the sidewalk..I'd start with maybe some logs or branches..toss over top of that any sod (upside down) or soil you can get your hands on..even wood chips or compost or sawdust or whatever you can get..and then over the top put in some plantings..it really doesn't much matter what you plant, as long as it will get it's roots down into the pile (berm) along the sidewallk..it can be beautiful so that the walker by's can enjoy it or it could be food crops, trees, which I of course would prefer.

also..take a fork and step on it as deep into the soil as you can (no irrigation lines or elec please) and jiggle to loosen up any compacted soil ..esp in those bad spots..if you must retain a lawn then put down some siftings of compost and maybe a little wood ash in the lawn areas after loosening up any compacted areas..

any taller plants that would shade the soil would help..but also the berm would hold moisture from running away from you out into the street

Noah Figg wrote:What about this, Tyler? Is this kind of what you suggest?

Yes, but I think you can enlarge the depressed lawn area a little bit more to extend between the trees a bit if you want more lawn; if you want minimum lawn what you have is probably good. You can put a swale along the area between the trees and the sidewalk (where your drawing says "swale lines approximated) with a berm as Brenda suggests to help deflect heat from the sidewalk.

Noah Figg
Posts: 57
Location: DFW Area, Texas
1
posted 9 years ago
Ah, okay. A second swale and berm by the side walk. Thanks for all the advice. I hadn't thought about the effect of the sidewalk there. I'll post back if I make progress.

Brenda Groth
pollinator
Posts: 4437
Location: North Central Michigan
29
posted 9 years ago
many people also use the areas between the sidewalk and the road..also often called right of way...of course the one there would be hot and dry without any improvements

Ed Johnson
Posts: 86
Location: Durham region - Ontario, Canada - Zone 5
2
posted 9 years ago
How about seeding mangels or some other large root veg (daikon, etc)? That'll punch deep holes in the soil and increase water infiltration. Then chop the tops and let the whole works compost in place. I'm going to give this a shot in the spring
Andrew Parker
pollinator
Posts: 520
Location: Salt Lake Valley, Utah, hardiness zone 6b/7a
5
posted 9 years ago
My recollection of North Texas, 30 years ago, was that they let their lawns dry out when it was dry, and when the rain came, it greened up. I also recollect that one tried to stay away from lawns because of the chiggers. Most lawns were zoysia grass which looked good from the curb, but you could see through to the clay soil if you were on top of it. Bluegrass doesn't recover well from drying out and needs irrigation.

Look into subsurface drip irrigation to reduce your water needs.

If you want to increase water retention in your lawn, you will need to amend your soil with expanded clay/shale or charcoal, or something similar.

Other than letting your lawn dry out naturally, xeriscaping is your best option for conserving water and keeping a groomed landscaped look, if it is allowed.

Bertolt Stanish
Posts: 2
Location: Spring Hill, TN, USA
posted 8 years ago
I've been messing around with burying my un-composted food waste beneath my lawn, but on contour--a kind of slow swale. So every time my compost fills up I'll combine it with mail shreddings 1 to 1, run outside, gently pull back a 6-8" deep by 3' section of sod on contour, bury the compost along the section, then replace the sod and squish it down a bit until it is relatively unnoticeable. The effect is like that of a minor swale, particularly as the length of the compost across the contour increases over time. At first it looks like your lawn is bloated, but later it shrinks as it slowly releases nutrients down the landscape. I think pulling the sod back downhill is preferable, as the opening/ridge created is infiltrating the water, not merely directing it slightly upwards over the surface. Not only does this improve your water situation and soil OM, but also saves you from having to compost if you don't like the whole pile/turn chore. It is a bit of task to dig (and kind of evokes embarrassment if you live in an HOA suburb with nosy people breathing down your neck at everything you do), but I really like the idea and I'm going to keep trying to make it easier and less noticeable. Has anyone else tried something like this?
Noah Figg
Posts: 57
Location: DFW Area, Texas
1
posted 8 years ago
Andrew, I have watered much less than my neighbors do, who generally only do it in the hot summer at night. I did it occasionally, maybe once every week or two during a bad summer drought, whereas they probably did it 2-3 times a week instead. I think it is primarily this that led to the patchiness which still persists. I have bermuda grass as well as a thicker bunching grass growing there and they do bounce back somewhat after drought, but not fully in my case.

Bertolt, That is a very interesting idea. I'm sure that helps build up the soil and moisture retention over time. I don't have that much compost material that doesn't already get put to use elsewhere, but I will consider that in the future. I usually tuck it under mulch, put it into a compost pile, or into the center of a banana circle type bed I recently added.

Anyway, I have a better a-frame and I have spent some more time mapping out the contour lines, though, so here is some updated information that might change things a bit. First, the stump is not actually raised. All the upper parts have broken off and it is a depression at this point. It's not defining the shape of the ground in any way either. I plant to just dig up a few chunks to bury in hugelbeds. Anyway, I decided to map my contour lines onto a google street view picture of my house from before I moved in. Here are the updated contour lines more accurately measured:

link
(All the pictures are reduced size from the forum, but the link is to the actual full size image.)

My interpretation of the original high sunken area to hydrate the lawn:

I am a bit afraid of this plan for a few reasons.
A - I have foundation problems that will be soon checked out and worked on. I want my plan to draw water a bit away from the house before sinking in. Also I want to distribute the water that is near the house evenly around the edge and especially the sides of the house, which no rooftop runoff currently hydrates. In addition the right side is planted densely with trees and shrubs too close to the house, further draining it of moisture comparatively.

B - I think a sink on the top of the hill would concentrate water where I already have too much and wouldn't get it to all the lower dryer spots. It also would only catch a small amount of rain actually falling on the lawn, about 1/3 or less I'd guess. The dry parts downhill would be hydrated from underground more I'm sure, but the right third of it wouldn't and the side of my house certainly wouldn't get any help.

I think my lawn's contour gives my the opportunity to spread that roof runoff and falling rain to every inch of my yard, even the side. Here are a few ideas I have tinkered with.

This idea has basically 3 medium swales. One diverts water slightly from the house and stores it above the left tree. This swale could also feed near to the front door beds that would be convenient to check. The second swale feeds the right side of the house and the right tree capturing much of the hill runoff as well as right-side roof runoff. The lowest swale allows a second near path cultivation area as well as surrounding the existing natural pit to use some of that water. I imagine this would stay pretty moist if protected properly with plant cover and mulch.

This idea uses rather small swales more thoroughly covering the lawn. It winds water in a zig zag path that should fully hydrate the lawn both above and below the trees. It allows 3 spots near the walkway that pass possible beds.

This idea is mainly 1 large swale that will pick up hill runoff as well as both roof runoffs and help hydrate the lower portion of the lawn. I added a small swale near the front walkway and capturing the left roof runoff, mainly to have a near the front door location and to not allow all the water to run down to the large swale directly.

I hope my many solicitations for advice will help others besides me as well. I really appreciate it.