posted 2 months ago
I had a rotten tree in my front yard that absolutely had to come down before it fell on someone. The stump was so rotten that it looked like a planter so I filled it with a 50/50 mix of homemade compost and top soil. I planted an asparagus, strawberry and tomato (because I had a spare that one of the kids started). I also seeded for white clover, creeping thyme, apple tree and borage. A neighbor walked by and called it a "tree garden". I hope that as the plants get bigger and the stump rots it will not be an eye sore. With luck an apple tree will sprout and make a nice shade/fruit tree. The rest of the wood went into a proper hugelkultur mound.
20210703_170335.jpg
20210703_173518.jpg
20210716_161700.jpg

If it stinks, you're doing it wrong...

J Youngman
pioneer
Posts: 91
Location: North Texas, Zone 8a, Black Clay
6
posted 2 months ago
Cool. Looks like you left a small trunk growing off the side? Or is that a completely different tree?

I would be concerned about an apple tree growing faster than the stump rots and potentially becoming root bound and top heavy. Also, if the apple tree did grow and the stump did rot, eventually wouldn't you end up with an apple tree with an above ground root system?

Not trying to be negative, just thinking about what could happen long term. I guess you could always build a tall "raised bed" box around the stump which might solve for the apple root system, and if you did it now you would also be rotting the stump from the inside and outside.

posted 2 months ago
Yes, that trunk was the healthiest part of the tree so I left it for now to be a nursery canopy but if it shows signs of rot I'll remove it too.

I hadn't considered root binding an issue as tree roots break underground pipes and stone. And the tree was rotten right into the soil so there appeared to be plenty of room. I am planning on mulching around and on the stump yearly to eventually get to a mound and adding guild plants as I can. Baby steps.

I am open to criticism. I have been studying permaculture on and off for years and have been gardening for  the last seven or so but this year I finally have my own place and the freedom to do whatever I want. As long as the local zoning people don't come knocking. I have used and built planters but they end up being more work than anything. 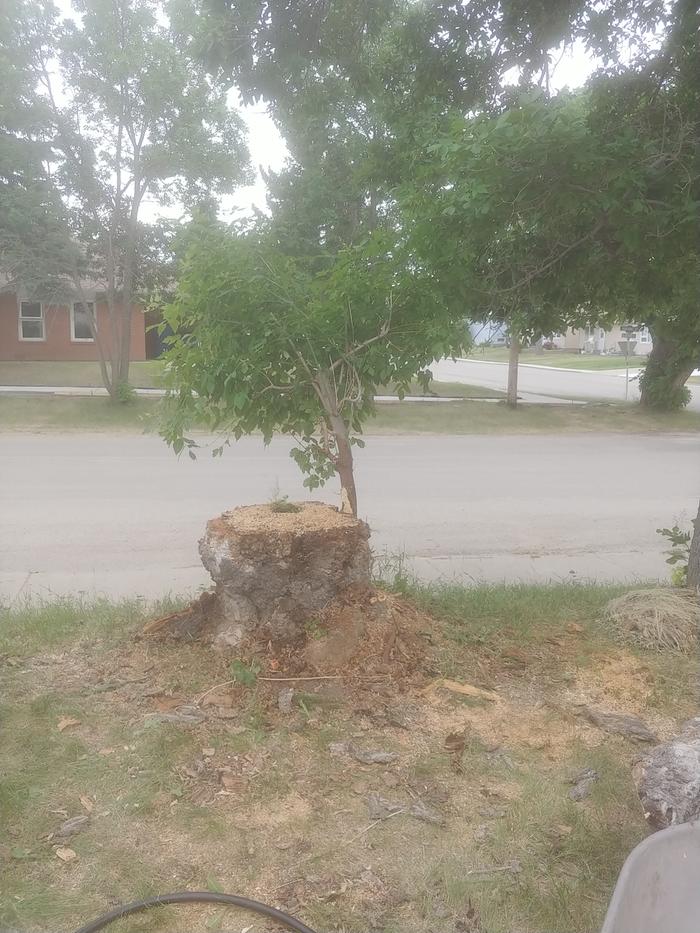 If it stinks, you're doing it wrong...

posted 2 months ago
It's hard to say about what the apple will do long term but the veggies will probably do well. I did that once with a pumpkin & a tomato. Worked great.