T Krolik
Posts: 6
1
posted 8 years ago
Hi all, we are new to the forum. searched for it in a hurry using "holzer, pond, forum"
would appreciate any input- inspired by Sepp's videos and books, built an unassuming pond this summer- about 300 sq feet, some 10 feet at its deepest. the pond is on the slope fed by a seasonal creek, worked hard on making the dam stable and leak proof- so far so good. The pond has filled, no apparent leaks.
Now to planting the dam thing- Sepp's seed mix, lots of lupines, berry bushes.
The question that Sepp Holzer's Permaculture doesn't answer: trees or no trees? In favor of trees: improve stability, "hold" the dam? the dam is on the north side of the pond, so trees would help trap the heat?
concern: would the roots seek out water, form a fibrous mess and make the pond leak?
avoid all trees and stick with lupines and bushes? plant only certain trees with less invasive roots?
would appreciate your ideas on this!

IMG_3783-1-.jpg
James Colbert
Posts: 273
12
posted 8 years ago
This is a good question I am curious as to the answer as well. I would suspect it depends on the construction and sealing method used.
T Krolik
Posts: 6
1
posted 8 years ago
the soil on site has a high clay content in general, and we tried to use the heaviest clay for the dam- basically, a la Sepp Holzer, clay on the pond side, rocks and clay on the outer side, wide foundation, sloping about 45 degree or less, vibrated with the excavator bucket. when we started digging in spring, the soil was saturated with water and the whole thing was sliding like a mud cake. we had to leave it alone for a couple of months to dry out. it was then possible to work it with an excavator and build a dam.
for now, we have planted the water edge with irises and arrowhead, planning to add pickerel weed, native water lily and cattails.
the slope is seeded with native plans ( lots of lupine), Holzer list seed mixture, and a dozen currant bushes. I have dug up in the woods a bunch of young mountain ashes and hazelnut trees to plant on the dam, but have my doubts.

Posts: 7926
Location: Currently in Lake Stevens, WA. Home in Spokane
318
posted 8 years ago
Wow! Nice pond. Will be even better once the vegetation regrows around it.
(If it was mine, I would consider a 1 pound bag of wild rice from the health food store planted along one bank.)

I am NOT a soil engineer, but was going to voice my opinion that tree roots could cause a problem with the dam.


when we started digging in spring, the soil was saturated with water and the whole thing was sliding like a mud cake

Now that the pond is full of water, the soil will stay saturated with water. Water is a very obedient element, and will obey Mother Nature's laws (including the one about gravity).

I don't think you want to risk destabilizing the soil with massive roots.

It just might answer your down slope neighbor's question "What happened to all the water in the creek?" Woosh!

T Krolik
Posts: 6
1
posted 8 years ago
Thank you, John. Hadn't thought of wild rice- will look into that. would you harvest it for food, or are there other benefits?
interesting point about roots destabilizing the dam. i actually thought they would anchor it.
in spring, as the creek flow was much higher and we were digging right in the creek bed ( found ,literally, many tons of amazing topsoil there, too!), the whole thing was a mud bath. Holzer warns about it somewhere in the book ( how loam needs time to settle and dry out a bit before you can shape it).
the neighbor downstream is aware and has no problem with the pond, it is the jealous neighbor to the west that might be a problem- part of the creek comes from her property and she has diverted it. it now dissipates over her field. really, once the pond is full 9 and that's very easy to accomplish in spring), the flow is back to normal. i hope our neighbors build ponds too (provided they allow water to flow back its usual way)!
Posts: 1
posted 7 years ago
I would love an update on this pond. I am planning on doing the same thing on my north hill (just slightly sloped). How is your water holding up through the spring rains? Did you end up planting on the north/dam side? I was going to plant my trees there-I have awesome clay soil for pond building but have never built a pond. How much did it cost to do this? I am amazed at how similar this is to my project. Can you give me any advice before I start digging???
T Krolik
Posts: 6
1
posted 7 years ago
Hi there! so far, so good- the pond filled up last summer and stayed full through the winter. the dam feels solid so far.
it is very early spring where we are, so plants are just starting to grow- can't wait to see it in full bloom. the photo is from a couple of weeks back.
we mostly followed Sepp Holzer procedure with vibrating the soil ( which has a high content of clay) with a bucket of a digger. we started digging last June, I believe and had to back off because of how wet it was. it also goes with Sepp's advice on loam- to pile it and let it sit. Later, in August, we were able to work it into a dam.
You might want to consider the direction of your overflow piping- we decided to direct it sideways, into the slope first, before allowing it to flow into the old creek bed, thinking that it would somewhat improve stability of the dam. we also had to put in some drainage 10 feet to the east side of the pond as there is quite an underground creek there. at the moment it is draining into the creekbed downhill from the pond.
there is a little bit of sediment already on the bottom of the pond, but hopefully it was mostly due to the new construction and will not continue at this rate.
the upper part of the pond had algae bloom for 3 weeks after it was completed, and is crystal clear now. the deeper part was too murky last year i think to allow for algae, so it is getting some now that the water is transparent. there is not much of it though yet.
we haven't planted any trees yet, but are thinking of some around the upper part and the sides (south east to south west), mostly to obscure the fence that we will have to erect to keep cows securely out of the pond area. we will plant the trees far enough that they won't shade the pond or shed leaves directly into water. probably no trees on the dam side (root concerns), but berry bushes, lupines, wildflowers.
planted lots of Japanese irises around, arrowhead, marsh marigolds and water lilies in the water.
our next task is to put bark and rocks to establish paths around the pond- i am worried about our kids stomping out all the plants we are trying to grow there! certainly lots of joy for the little ones- swimming, damming, watching aquatic life, kayaking.
the cost? probably around $7000? my husband traded work with the guy who dug it, so i'll have to verify the number. 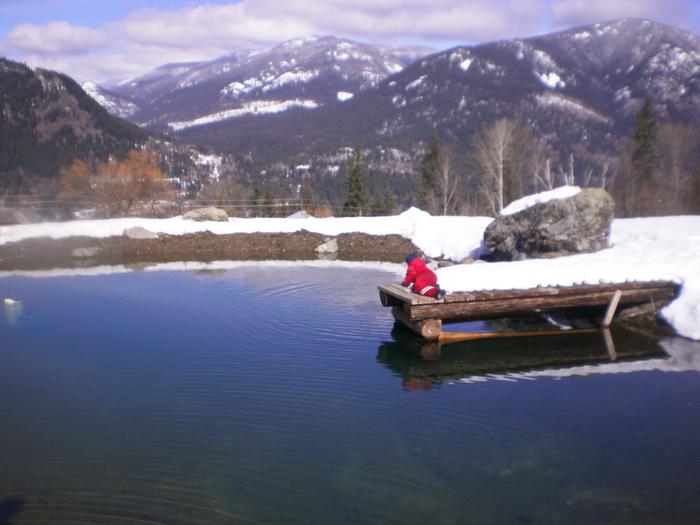 posted 7 years ago
gonna keep an eye on this, i would second the wild rice, and perhaps some plants that will grow IN the pond as well, particularly lotus flowers, pretty flowers that make a decent tea to help you sleep and a large, sausage link like root that i hear makes a good vegetable

i hear that bamboo is good for around damns but im NOT saying that out of experience, just second hand knowledge from what ive read online

T Krolik
Posts: 6
1
posted 7 years ago
correction: $7000 included spreading of topsoil from the creek bed in the field and curtain drain on the east side of the pond. so the pond itself was probably "only" about $5000.
lotus and wild rice sound great, but we are in growing zone 4-5 here- do you think it would work?
Lance Kleckner
Posts: 123
Location: West Iowa
2
posted 7 years ago
Yeah, trees are bad for a dam, can be moreso when they die and the large roots rot. Windthrow could also take good chunk of dam too when they are larger. As a grass, running bamboo could work good to hold the dam together, though your climate looks pretty cold for it. 5k seems like a lot for small hole, but probably has to do with your remote location and also the rocks you can to work through. Looks like a great addition to your landscape.

T Krolik
Posts: 6
1
posted 7 years ago
the digger guy lives next door (not sure what you mean by our remote location), we trust him, he has done other work for us, took him 35 hrs to dig the pond and construct the dam. we didn't hit the bedrock either. the pond holds about half a million liters of water, so not such a small hole for us. while it looks good, we didn't dig it for beauty. it is primarily water and fire security. we have connected the pond to our irrigation lines and could use it for irrigation, water for the house and fire suppression ( it is about 100 m higher than our house, so gravity fed with good pressure).
here's a picture of different little pond by the house- dug by hand, cost nothing but sweat and time. done for the looks (used to be aperpetually wet spot on a grassy slope impossible to mow).
IMG_3623.jpg 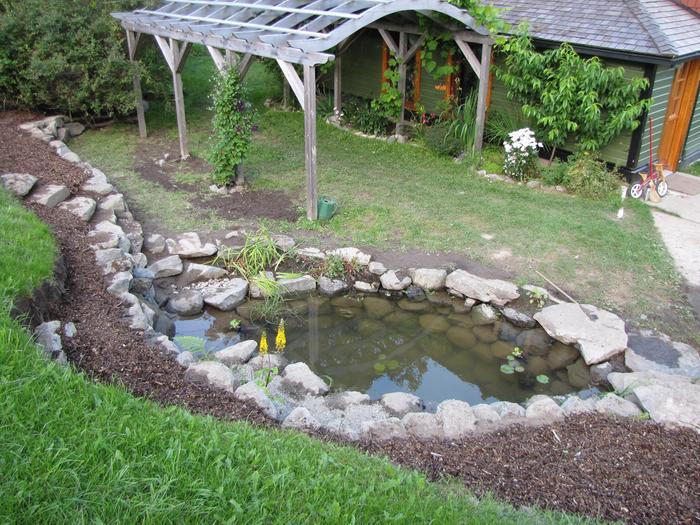 posted 7 years ago
Both ponds look great. I have to second that bit about planting trees in proximity of dams, though. One good blow and your friendly neighbour will be a lot less friendly, and much wetter. I hadn't thought of running bamboo, but I'd give it a shot.

Lance Kleckner
Posts: 123
Location: West Iowa
2
posted 7 years ago
What I mean by remote location is that it looks like there would be less competition for dirt work, thus would be more costly. Around here it is farm country, so a lot of different people around here with dirt moving equipment, so prices seem pretty good. I would guess if I had a hole done that size, could cost around 1 thousand dollars.

There are many factors that come into play, but ballpark figure that is thrown around a lot is that for every acre of pond built, is around 10 thousand dollars.

James Colbert
Posts: 273
12
posted 7 years ago
Running bamboo would perfect for a dam wall. The roots are shallow yet very strong.
Joe Skeletor
Posts: 113
Location: Blue Island, Illinois - Zone 6a - (Lake Effect) - surrounded by zone 5b
posted 7 years ago
zone 4/5 would be fine for lotus and wild rice. We have a pond full of lotus near us (zone 5), and wild rice grows up into Wisconsin and Minnesota (at least zone 4)