Research: Roundup Diluted by 450-Fold is Still Toxic to DNA 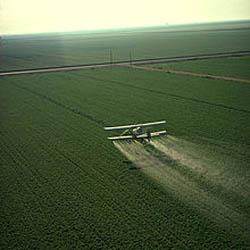 New research released ahead of print and published in the journal Archives of Toxicology indicates that Roundup, the most common formulation of the herbicide glyphosate, is not only more toxic than its constituent ingredients, but is capable of damaging DNA within a human cell line when diluted down to 450-fold lower concentrations than presently used in GMO agricultural applications. In the researchers' own words, Roundup has "genotoxic effects after short exposure to concentrations that correspond to a 450-fold dilution of spraying used in agriculture."

posted 7 years ago
Not a big surprise that Roundup is extremely toxic, but very concerning!
duane hennon
gardener

Could Monsanto's glyphosate-based herbicide Roundup be leading to the overgrowth of deadly bacteria in animals and humans consuming genetically-modified food contaminated with it?

This question follows from a new study published in the journal Current Microbiology titled, "The Effect of Glyphosate on Potential Pathogens and Beneficial Members of Poultry Microbiota In Vitro," which found that the active ingredient in Monsanto's Roundup herbicide, known as glyphosate, negatively impacted the gastrointestinal bacteria of poultry in vitro. The researchers presented evidence that highly pathogenic bacteria resisted glyphosate, whereas beneficial bacteria were moderately to highly susceptible to it.