Joe Githler
Posts: 2
posted 10 years ago
We've all heard of the three sisters garden, what are some other native plant parings?

Are there any good NW companion planting guides?

Any handy ancestral "function stacking" tricks?
Landon Sunrich
pollinator
Posts: 1703
Location: Western Washington
22
posted 9 years ago
I've been watching this one and hoping someone would post. No one has so I guess I'll step up and take a whack at it myself even though I have little to offer other that personal observation and opinion.

Something that I see a lot of in nature (disturbed forests) Is Alder/Washington Berry/ Thimble Berry/ Nettles.

Washington berry and salmon berry can both be pretty watery, and you get a lot more biomass thank fruit. without an alder canopy they take over and will exclude damn near everything. Thimble berries taste great but are very fragile and seem to like a good deal of light to fruit well - you can see the holes in the canopy where they grow. Nettles are perfect. There is no better plant to grow in the pacific north west. They self propagate by seed and rhizomes and are virtually impossible to pick out - they just keep coming back - This year my first nettles were up Feb 2nd and you can eat them until september. That's tons of food for no work. Alder fixes you nitrogen, provided lots of leaf litter, as well as habitat for oyster mushrooms, timber, and firewood. Pretty killer

another (mostly native) guild that seems to be doing well on my property is Grand Fir/Golden Chain/Ocean Spray
Grand fir provides habitat to many birds, most notably eagles (who totally leave my free range birds alone - they know me and they know whats up- hawks are tougher but the crows almost always chase them off for me) The Golden chain (non native but 4th generation seed to my property) fix nitrogen (

? I think they do - I have asked this myself it seems like no one on the entire internet knows) The ocean spray coppices really well once established and provides plenty of long straight tough wood that grows quickly. The deer love to nibble down the green growth so I'm sure goats would totally devastate them. I dug up some native strawberries and transplanted them with this grouping last month hoping to be able to establish ground cover.

Another plant I am playing with is the native trailing black-cap. I got one plant with the most massive (still delicious) fruit I have ever seen coming up on my property this year. I saved a bunch of seed for it. Hoping its genetic and not sight specific. Great vine - way easier to control than many vines I've seen around here. Though it defiantly will run over and through everything if you let it.

There's a start. Sorry if it's a mess. I'll come back and tweak and edit it later perhaps as more comes to my mind. I'm tuckered out now though. To much digging today. And for other people at that

edit: another very important function of grand fir is its roots which keep me from sliding into the ocean. Something to think about if you have property near the water

Landon Sunrich
pollinator
Posts: 1703
Location: Western Washington
22
posted 9 years ago
I'm going to elaborate some here as I feel that this may be a good guild for many new sites in the Pacific North West.

A simple hypothetical native planting design for a square empty lot of your choice. I'm sure someone creative could come up with at least one more plant, fungus, or animal to introduce. I will build from the canopy down, which is apparently the way you should do things. This is not a design system that could provide all of your food needs or provide food overnight. One could mange this system as a sort of 'edible woodlot'

I often see alder bunched up in insanely dense patches along the worst of fill dirt. The kind found along along tortured roadsides. They get mowed, sprayed, flooded, baked, and they just keep on growing. Poor Soil? Rocky soil? Wet soil? No problem. Plant them as close as you feel comfortable. Plant thrice that many. If you have alder seeds and a 'plant-it jr' and put them in like you would freaking carrots or salad mix. Plant every other square centimeter with nettle.

By the first fall you will be needing to chop and drop. The smaller you chop it and the move it gets worked into the soil the quicker they'll rot. Alder leaves will of course fall annually raining fresh mulch down to the floor of your new native forest.

I'd be looking for something like 1 4-5" alder per 2 feet by year 3 or so. And continue thinning and opening up space from there on as I needed. At this point your alder is mature enough to inoculate with oyster mushrooms. You could stack these along your path in the shade.

Oyster mushrooms - A Primary Decomposer. Fruit Bodies are edible and high in protein.

I'd cut down a few more trees - chip the branches - inoculate the trunks - and plant some Salmon Berry thickets in the clearings and thimble berries along any available edge. Or Try trellising black caps up alders and through salmon berry bushes. Stay alert though because they will also creep as a ground cover (but not fruit in the shade of an alder canopy) and can compete with even the mighty nettle.

This is the point where one would be tempted to branch out into non native species.

You can use you're imagination for year ten or 15. I'd probably have a nice little alder grove where the center had been turned into a peaceful clearing perhaps with a rock pond. As time goes on one the Old alder will naturally snag and turn into food producing spore broadcast towers. Nettles everywhere you want them.

Good eatin' and more importantly good for the land.

One you start chop and dropping and/or chipping you are almost certain to get a forest floor cover of wavy caps. BEWARE THIS PESKY PSYCHEDELIC. It has a mind of its own and is clearly bent on world domination. For this reason it has been outlawed both locally and nationally.

Aljaz Plankl
Posts: 386
14
posted 9 years ago
Here in central Europe we got many chestnut/beech forests with not much growing under the shade.
Another natural example is also beech forest with ramsons under it.
Edges of the forest here are another story, so many plant guild it's just crazy.

Aljaz Plankl wrote:
Edges of the forest here are another story, so many plant guild it's just crazy.

Yeah no kidding. Lets not even get started on nurse logs! My suggestion is more of a simplification geared for human production. I took a walk today through some natural regrowth alder forest that was left after clear cutting. This is not the specific site I was thinking of and in some areas the canopy was very dense and the ground lots of red elder berry and sword ferns. I took some pictures. Here are 3. I took many more than 3. Sorry for quality - It's my first time using a camera in eons.
DSCN0537.JPG 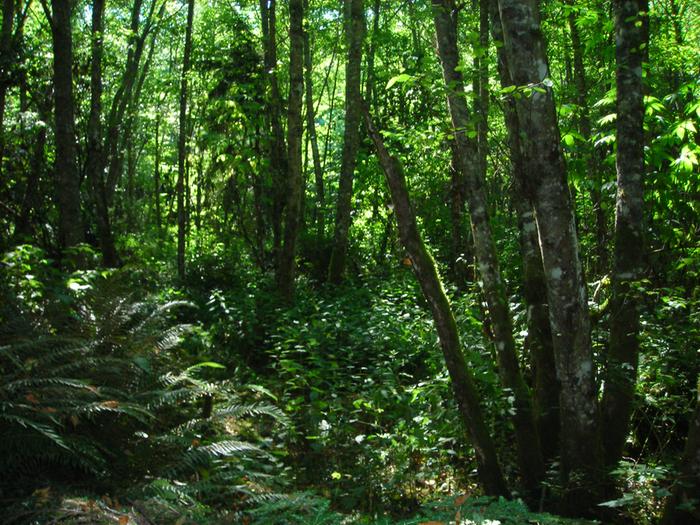 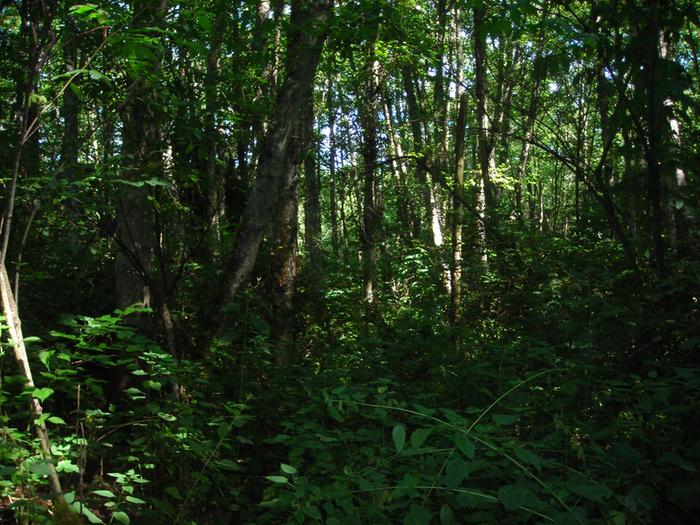 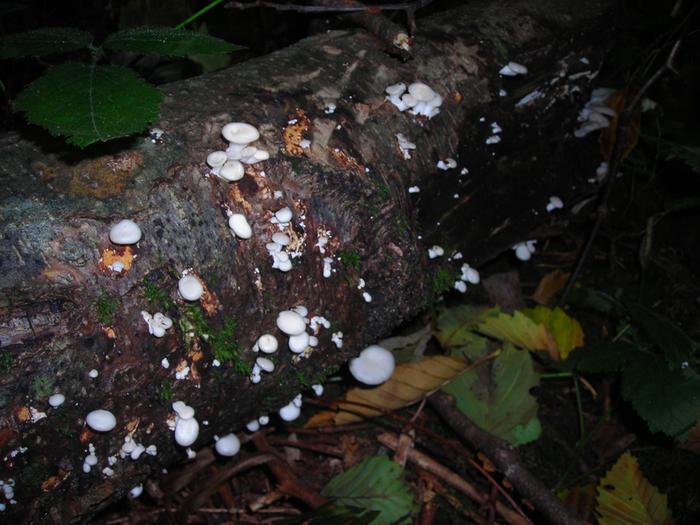 Aljaz Plankl
Posts: 386
14
posted 9 years ago
They used to have coppiced alder forests here in Slovenia.
Now they don't do it anymore, soil erosion they say (hilly country).
I was thinking why, and o forester told me, you have to clear cut, otherwise you don't get sun for coppiced trees to regrow again, so you get normal forest.
Forestry here is smart, they let it be and stoped.
A friend got abanoded farm with that kind of forest which was not managed for 20-30 years.
It turned out to be multistemed alder forests with lots of other plants growing under, mostly shade tolerant.
With management not so intensive in timber production it can go a long way!

Landon, nettle, mushroom, alder guild sounds great.
Planting it from scratch, that would be nice.

And the regrowth of alder!
I like this natural occuring guilds so much, they are inspiration.

Beside forest gardening with fruits where we need to take care of the spacing in our climate, so it's not a reall forest, i'm now so much interested in growing guilds like you mentioned.
To grow a productive forest from a meadow, that's my dream.
It's so energy efficient.
Landon Sunrich
pollinator
Posts: 1703
Location: Western Washington
22
posted 9 years ago
Aljaz -

It is good to hear that the foresters in your country have stopped clear cutting! I hope that someday my country will be so wise. I imagine your country to be a beautiful place. I have never had the pleasure of visiting, but I lived in Austria as a teen and was astounded how similar some areas of it where to my home. Including large stands of alder and nettle. I would be very interested in seeing pictures of forests in your home land as well as any observations and inductions you may make!

One thing I have noticed is that alder forest lends itself to natural clearings quite well - and when it doesn't a little human help and small scale timber harvesting (or simply chopping and dropping) really opens up a beautiful sunny oasis. This could be a good spot to plant a more sun dependent species like a full sized fruit or nut tree. Here are two pictures of such a clearing.

I have been considering planting a fruit tree or two here illegally with the thought that by the time anyone else notices it it will have grown into a strong bearing plant. And I don't know many people who will object to and cut down a fruit tree. It just doesn't happen. At least not around here.

This is kinda what I was suggesting my above hypothetical. Managing and recreating natural ecosystems in such a way where 85-90 percent of the land is growing more or less naturally (and productively) and 10 - 15 percent is managed exclusively for human and animal needs. I can imagine and alder forest humming with honey bees and so full of deer that they would have to be manged with human pressures. 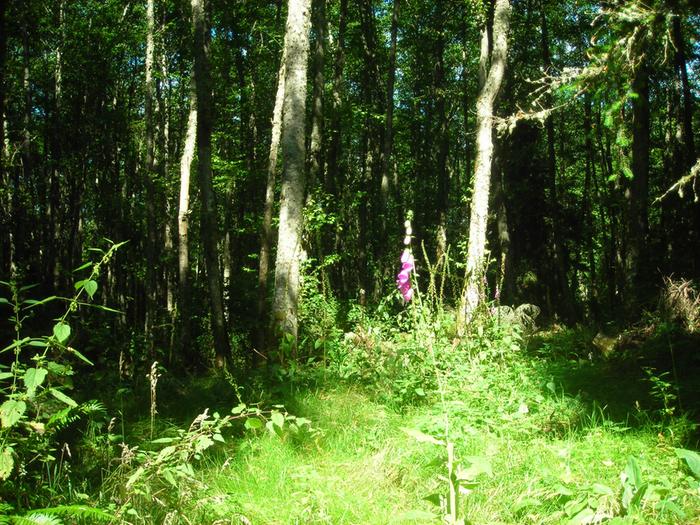 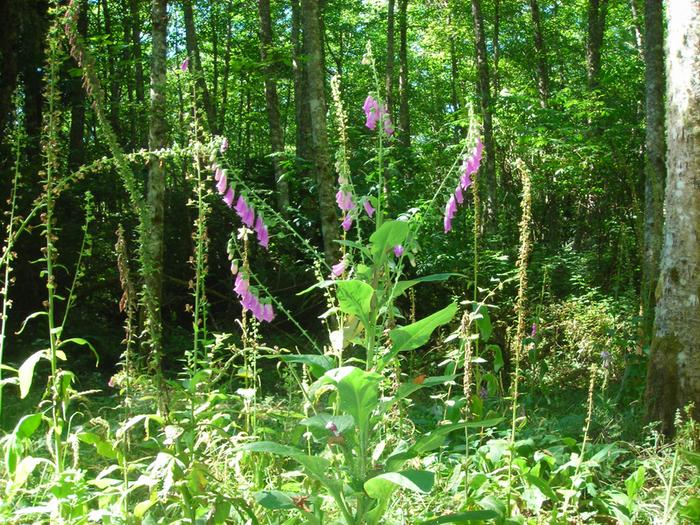 Landon Sunrich
pollinator
Posts: 1703
Location: Western Washington
22
posted 9 years ago
I saw this a few day ago and found it be really interesting. Alder cones hovering above a chosen nurse.

So what you see here is: Two alder seedlings popping out of a mossy covering on a thigh thick Red Elderberry trunk. The second picture above said trunk is of a cluster of alder cones hanging from the same Red Elderberries Upper Branches.

Red Elderberry and brambles are almost always the first thing I see popping up after a clear cut. Both have pithy cores. I have started a "woods walk" forum so I can keep talking about these sort of things without bumping this thread and getting too off topic.

As a possible native guild I think Red Elderberry and Red alder bare some looking into.
DSCN0581.JPG 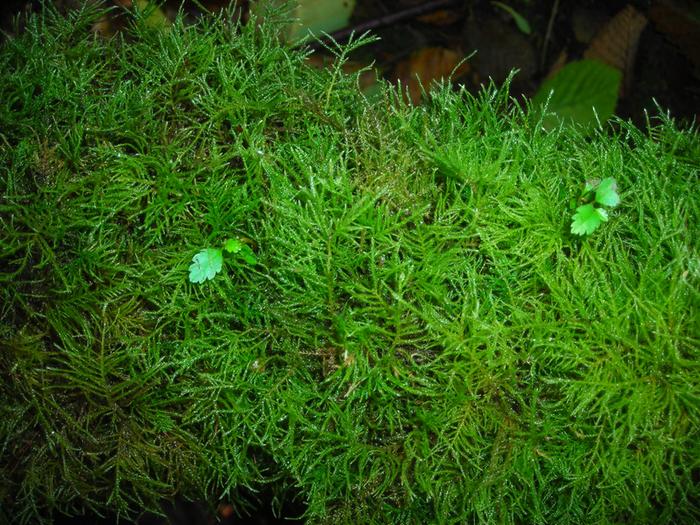 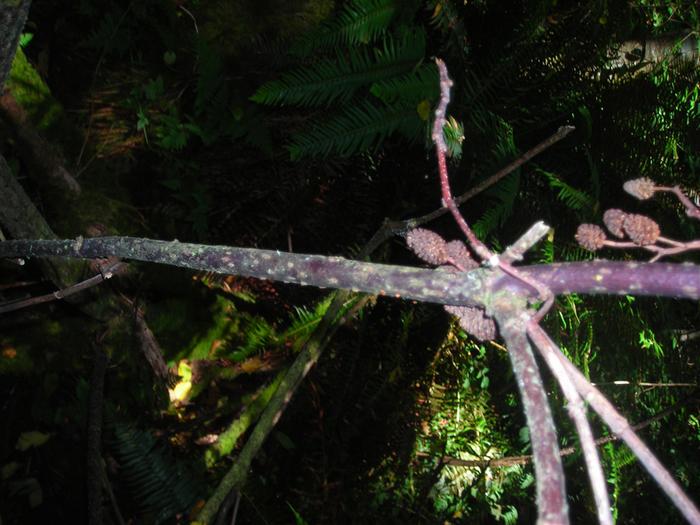