Jose Reymondez
Posts: 137
Location: Galicia, Spain Zone 9
3
posted 7 years ago
So having purchased and read Mark Shepard's book, I was left with questions about tree spacing. He has a multi-story system where he might might have chestnuts over apple over hazel over gooseberry.

Why work hard when god made so many mongongo nuts? - !Kung

Michael Milligan
Posts: 55
posted 7 years ago
Just a guess, 1/2 the distance between the walnut and the next walnut. So look up regular spacing for a walnut orchard (over-story) then you are planting the under story trees (apple and hazel) in between them. So, if your canopy trees are 20 feet apart, plant under-story trees in the gasp. Then plant bushes between them.

Besides, it will be 15 years before any problems might come up. imho
Miles Flansburg
pollinator
Posts: 4665
Location: Zones 2-4 Wyoming and 4-5 Colorado
462
I like...

posted 7 years ago
In another thread Eric Toensmeier posted this about spacing.

"In terms of spacing long–term productive trees, I typically want to see them spaced such that their canopy edges will just touch when they are mature, or preferably half again as far apart. Martin Crawford recommends that wider spacing to allow sufficient sunlight. In high and dry areas like Colorado more shade is desirable, do you would want them closer together. Depends what you want to grow underneath and how much light it wants (ginseng, ramps, and mushrooms full shade, while gooseberries, Turkish rocket and hazels part shade).

My thoughts about spacing are based in part on my experience being smaller–scale. I like to plant grafted varieties which tend to be fairly expensive, so I want to baby them. If you are growing seedlings, cheap wholesale bareroots, or mass–grafting your own, you might put them closer together figuring a fair amount will die. Certainly some of my pampered babies die as well, but I often try to replace them with something of the same mature canopy width"

posted 7 years ago
I'm with Eric on wider spacing for sufficient sunlight. We have acres of beaked hazelnuts as understory beneath maples thinned 15 years ago to let in the light. No crowns are touching, yet the hazels still only produce a dozen nuts per clump, and the squirrels, not being too concerned about ripeness, will beat you to most of them. We are trying to re-introduce the Butternut (white walnut) up here after it's extirpation by blight back in the day, as well as shag-bark hickory; maybe chestnut, and would not consider planting them inside the drip-line of another tree. Sunlight is everything with good fruiting. Well, you get what I mean.
Thanks for the Turkish Rocket Tip! We are looking to build up our "guilds", and it seems a candidate. Of course, the Design Police (Jill) has final say.

posted 7 years ago
Maples are a bad choice for the upper canopy of a food forest, their canopies are too dense. If you want a "sugar bush" keep them out of the food forest.

William Trachte wrote:We have acres of beaked hazelnuts as understory beneath maples thinned 15 years ago to let in the light. No crowns are touching, yet the hazels still only produce a dozen nuts per clump....

The beaked hazelnuts are supposed to be shade tolerant. Is there way too much shade or maybe some other issue? I've got 4 hazels that I planted last year and I'm adding 5 more this year, working my way up to 34 which should, theoretically produce 1000 lbs.

posted 7 years ago
I don't really get to pick my canopy here ;>, but point well taken. We are locating the Butternuts, shag-barks hickories and chestnuts on two ridges off a power-line right of way that are pretty open. You are correct about other, typical issues: Beaked hazel production would benefit from pollinating with corylus americana, and there are only one or two around; we've planted some hybrids from Badgersett Nursery way back at the house so we can take care of them properly. If they give a boost to the beaked over there, maybe we'll invest in more. Additionally, I have yet to begin pruning these massive, aging clumps for enhanced nut size. We have hundreds of 12-15 stem plants all packed in across several ridges. Just got my access trails going this winter. Any tips on pruning methods? 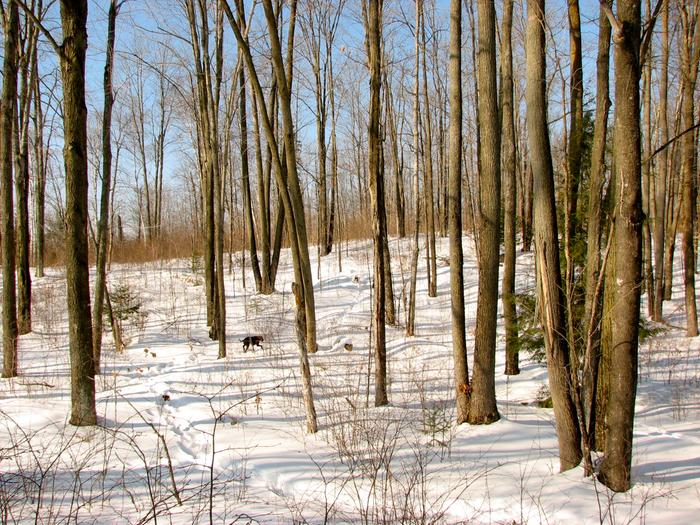 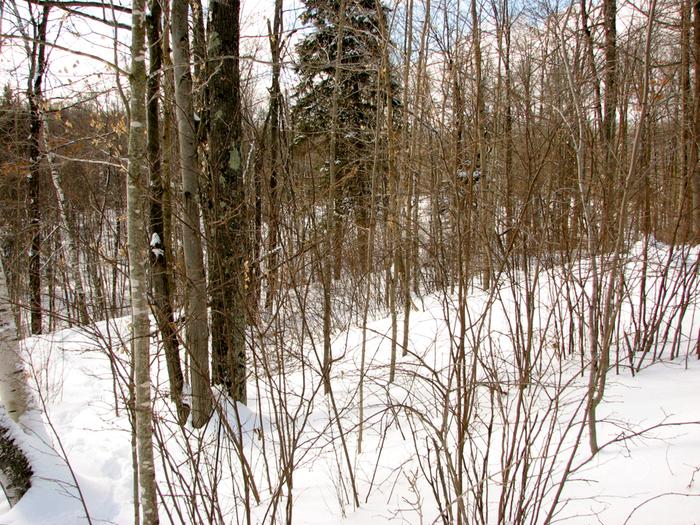 posted 7 years ago
I'm going attempt to lay them down a la a hedgerow but they probably need a few years growth first.

My woods looks like that 1st pic but with some bigger diameter trees. I'm trying to open the canopy for my livestock using my livestock. I will probably girdle some trees to let some light in and we did drop a few trees.

posted 7 years ago
Looks a lot like my place in Wyoming, William, only mine is mostly aspen. I am slowly cutting out the dead ones and opening up the canopy some . Hope to get some big hugel beds going this summer.

Miles Flansburg wrote:Looks a lot like my place in Wyoming, William, only mine is mostly aspen. I am slowly cutting out the dead ones and opening up the canopy some . Hope to get some big hugel beds going this summer.

Got these photos today of the big basswood blowdown from a storm late last fall that took out a maple on the way down. I'm trying to figure out how to position them for a terrace or hugel berm and a crop for under all the shade. It's the north side of the ridge. At least there's a new big hole in the canopy!
IMG_0737.JPG 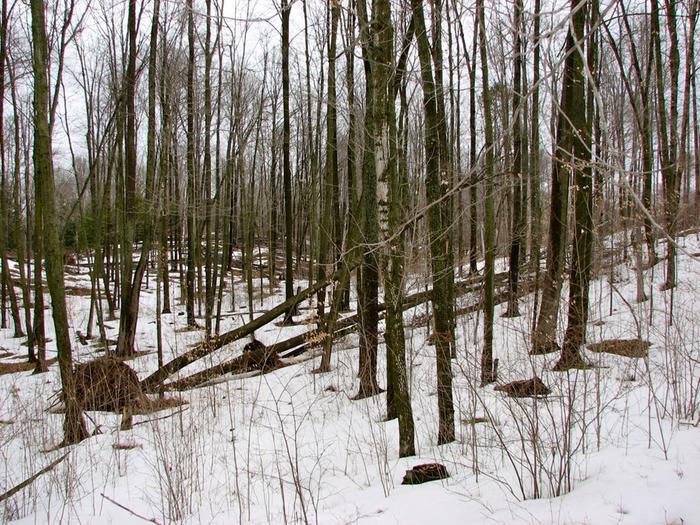 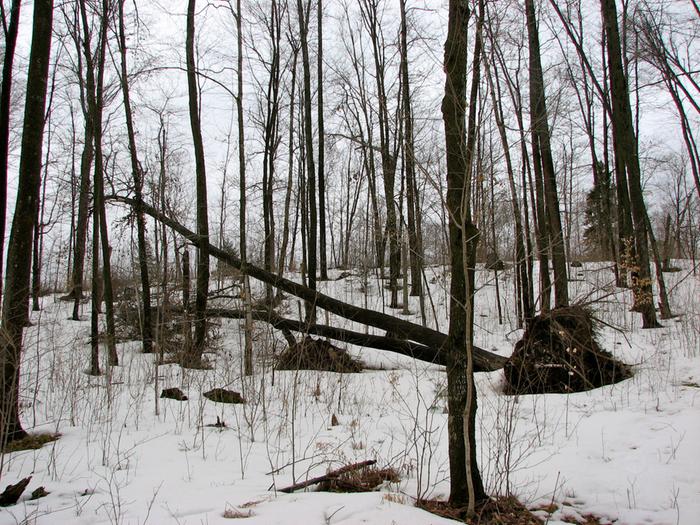 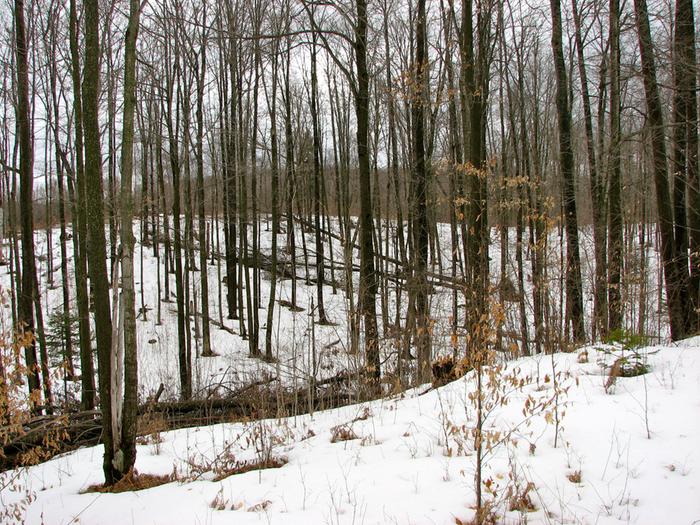