That link is to a diagram of a steam-driven water pump.

Is this thing safer to run than a steam engine? Does the user need to stand over it the whole time as it runs, or can it be automated? What would it take for it to explode?

How would some of you steam experts here feel about an average person using one of these steam pumps to drive a hydroelectric setup? Still too dangerous for the average person when compared to just running a steam engine? How inefficient would that be? Too inefficient to make it worth doing?

Again, I'm looking for a reasonably safe and cost effective way for the average person interested in energy independence to use steam power. If you tell me the steam water pump is just as hazardous to run, I'll keep looking for something else.
Creighton Samuels
Posts: 558
37
3
posted 8 years ago
From the looks of it, it's trying to use the water hammer effect to pump water, driven by steam; like a compicated hydrolic ram pump. I doubt that it would work, due partly to the rapid condensation of the steam upon contact with water. It might work okay, but it woudn't really be very efficient, and would cost a fortune to build one. You're lack of technical expertise would not be important, because by the time you built a working model you would be the most well known expert on the topic on this forum. As for the question of safety; safe compared to what? All energy is unsafe, how do you manage the risks? I wouldn't build this right next to the house or the swingset, if that is the question. What heat source would you want to use? There might be much simpler methods of extracting useful amounts of electricity, depending upon what your primary heat source is.
Bill Bianchi
Posts: 227
2
posted 8 years ago
A combination of a rocket-type stove and solar trough/solar oven is what I would prefer to work with, for active and passive heating.

I have a great stove we built to accept modular add-ons. It's a rocket stove with what we believe are improvements, like an automatic fuel feed system and a secondary air intake in the flue. It outperforms the original rocket stove we built, so we're doing something right with it. Since we built it to accept modular units that stack at the flue, we want to try to get the stove to serve many uses as possible. Hot water/oil heater, cooktop with stove, gasifier, ect... Generating electricity in various ways is a big goal of ours.

I can't seem to get away from a steam add-on, though we're already working with gasification. We're considering using a monotube boiler to run a Tesla Turbine, but I'm exploring other possible options as well, if any are viable and user friendly.

The generator we'll be turning is a Lenzless type we built; very little HP required as we're rotating laminated shields between stationary coils and stationary magnets. We hope to adapt it to a small wind turbine and we're trying to figure out the best way to get the stove and/or solar heat to turn it as well. We're fairly proud of the stove and we think folks will find it useful, but we believe this generator will be a real game changer down the line. All open sourced.

I read about an early steam driven water pump that had no pistons. I think it predated the piston steam engine, but I can't vouch for that as I'm relying on my memory alone. Having a hard time finding it again on google. It vented the steam into the water, and it used two chambers, one for steam pressure, the other to create a vacuum as steam condensed, if I remember correctly. Both chambers contributed to lifting the water.

We'd be very interested in a way to use heat to raise water, as well. Any suggestions or info would be welcome.

Creighton Samuels
Posts: 558
37
3
posted 8 years ago
Well, you are probably out of my league then. But I question whether it's a worthwhile endeavor. Trying to generate power from water, that was pumped with heat, is bound to be very inefficient with two energy conversions. If you're pumping water in order to store it, that might be worthwhile, but this theoretical engine seems like the hard way. There are many ways to pump water. The simplist way to pump water using heat is to simply seal a pressure vessel, and heat the pressure vessel directly, with the exit port near the bottom of the vessel. Slightly more complicated would be to use two pressure vessels, one heated and the other with cooler water and an exit port at the bottom, but with an insulated pipe between at the top. Steam is just hot pressure, and pressure can pump water fine. Still wouldn't be very efficient.
Bill Bianchi
Posts: 227
2
posted 8 years ago
Trust me, I'm not out of anyone's league, especially when it comes to steam power. I'm just highly motivated and believe solutions to our energy problems already exist and need only be identified, refined to usability, and freely shared with others.

Like I said, we've got a clean burning stove capable of burning not only wood, but bio-briquettes made from a variety of waste products. In other words, it can run very cost effectively from free or super cheap and abundant waste materials that would otherwise wind up in landfills. I am looking for user friendly, reasonably safe, cost effective ways to make it generate electricity while it reduces the amount of waste out there. There are several ways to do this, but some meet the criteria better than others.

Creighton Samuels
Posts: 558
37
3
posted 8 years ago
I have a simple idea for you to consider. Since RMH aren't actually very high BTU devices, but instead are particularly efficient devices, the heat available to boil water for steam power generation is realitvely low; at 60K BTU's per hour fed hard. So the steam power unit would be fairly small anyway. So just build a simple, refillable pressure vessel, and connect a small insulated steam line to one of those little hobby/kit steam engines that are downsized models of old production steam engines. You could connect a PM alternator and expect to get 50 -100 watts out of them so long as the water in the pressure vessel lasts.
Ben Plummer
gardener

Posts: 345
Location: Midcoast Maine, Zone 5b
23
posted 8 years ago
Bill, was it the pulsometer pump or Savery pump you were talking about two posts ago?
Creighton Samuels
Posts: 558
37
3
posted 8 years ago
I must say, that pulsimeter pump is pretty slick, while the Savery pump is pretty much what I described already. But the wikipedia reference is lacking in details. Sure, it might have been efficient for the age, but what about today? The article doesn't really say how efficient it really was. I would wager that a solar powered pump would be much more energy efficient, setting aside the point that his original goal was to produce electricity from heat.

Still, I wonder if such a pulsimeter pump is still produced. 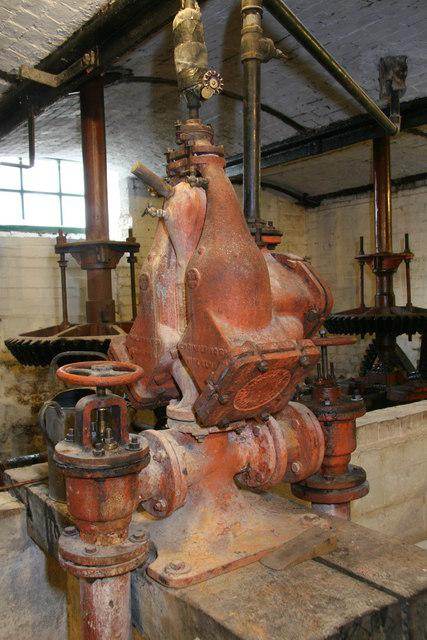 DaS Energy some time ago converted the steam driven water pump to run on CO2 using any heat from -40*C upward to +100*C. Water forces to the Pelton hydro turbine are from 1 bar to 10,000 bar pressure. For higher pressures Stainless Steel is used. All is home build off the shelf. The mechanical moving parts are one. Heat from be sourced from anywhere. Turbine/generator output is based upon one litre per second flow of 9 bar pressure water. Originally developed as a twin hydro, single steam turbine engine. That is the steam force is unaffected in 100% drive to a Pelton and Francis Turbine before giving 100% drive to the Steam turbine. This extra power output being possible by the use of physics applying to gas and water.

My apologies, the attached not include the CO2 condenser or return line to boiler as this is many and variable means of choice. 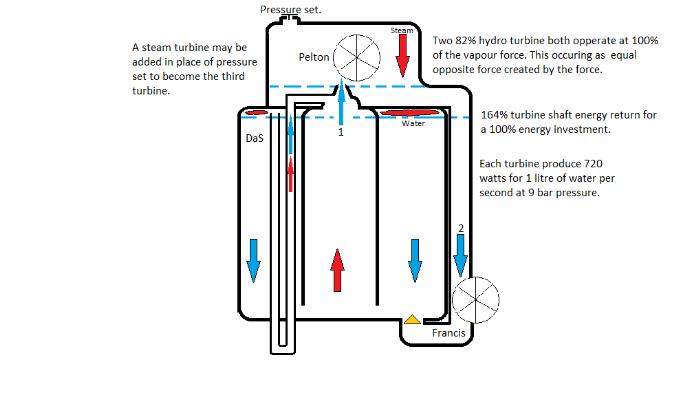 A different steam generator, home made is attached. If using steam the condenser is vented and condensate drawn back in. This same model can work with any Refrigerant using a non vented condenser. Though we work with CO2 due to very low heat to very high pressure facture. The attached is open vent for steam as the condenser would need be too large for steam for Refrigerant gas that is quite small. The system works by gas expansion pushes the water, the gas then follows the water into the expansion chamber and cools. When the gas begins it escape from the heater water floods back to the heating leaving a vacuum to pull cold refrigerant back into the heater. 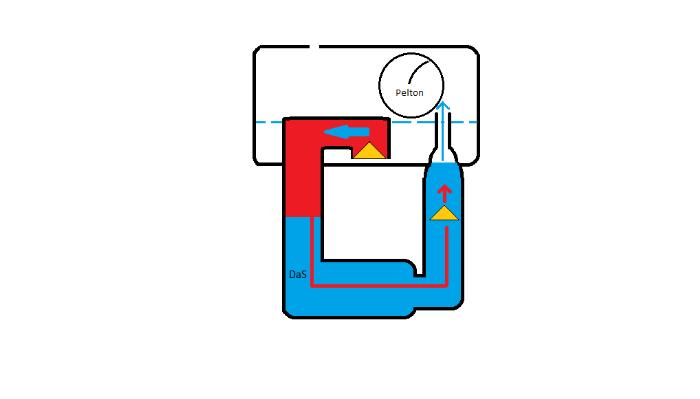