Posts: 1047
Location: Northern Italy
23
posted 7 years ago
Hi,
Sending some pics of a greenhouse I built.

Keep in mind that our architect AND our woodworker didn't have any time to help us out in the construction, so I took up a drill and a saw and winged it. I also know that wood and plastic and water don't make good friends, but that's all I had to work with. Might be a prototype temporary greenhouse. The next one should have an iron structure.

Any comments or thoughts are welcome. Might have to monkey with it this autumn.

It has 4, 1K liter tanks attached to the roof and collects rainwater, and it has two composters on the back. It ended up costing around 400 euros, minus the tanks. 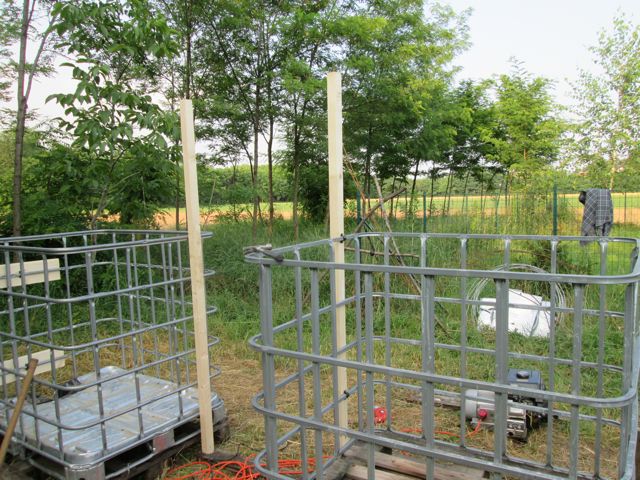 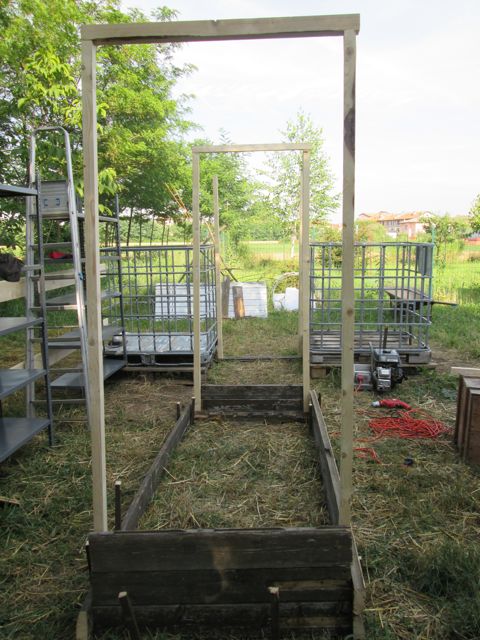 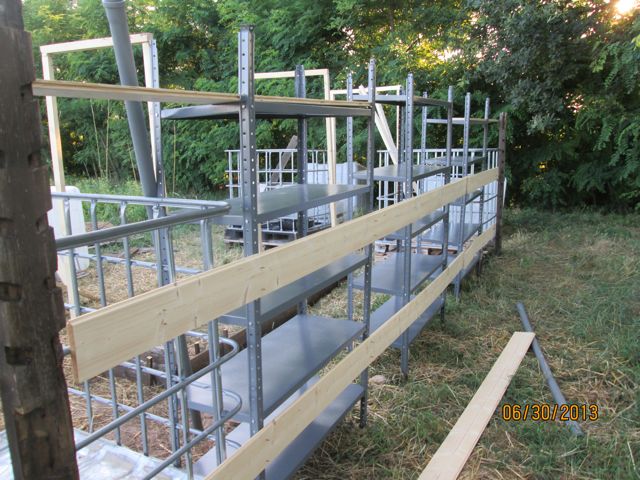 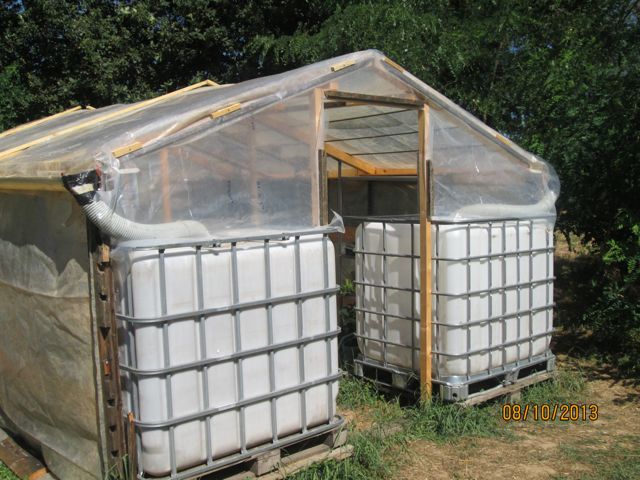 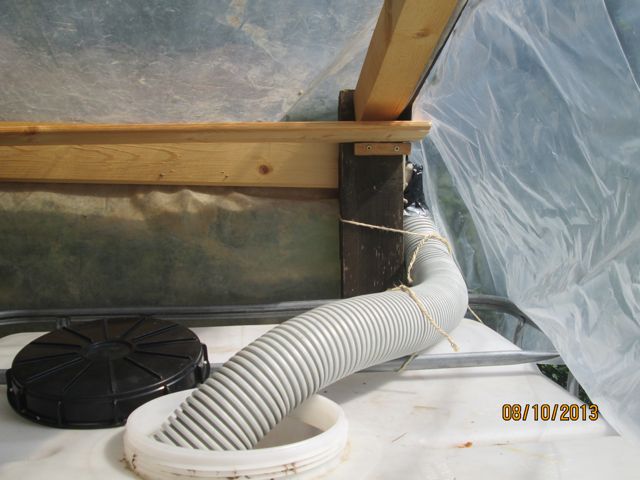 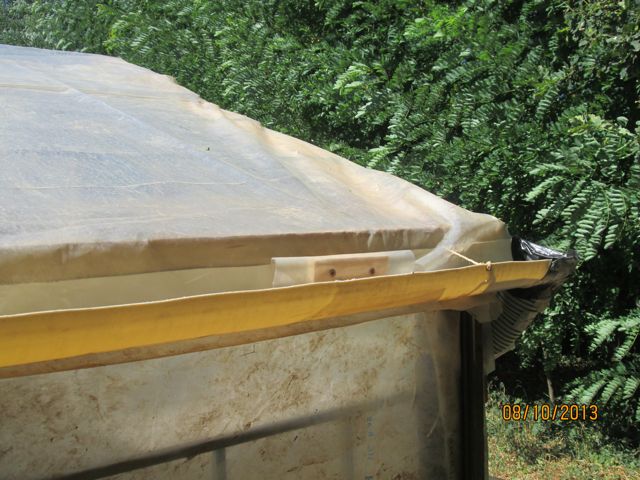 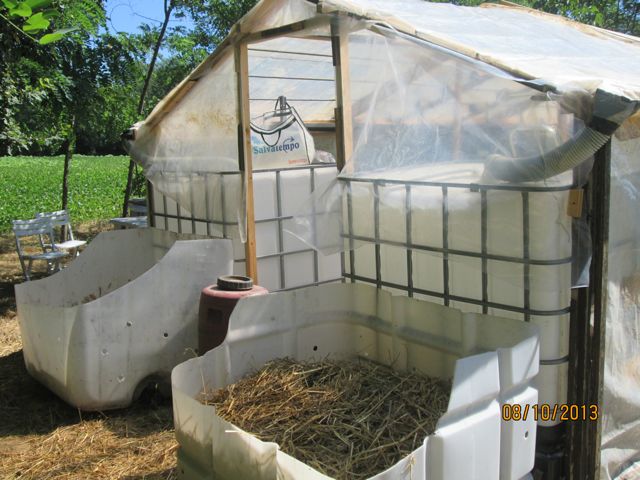 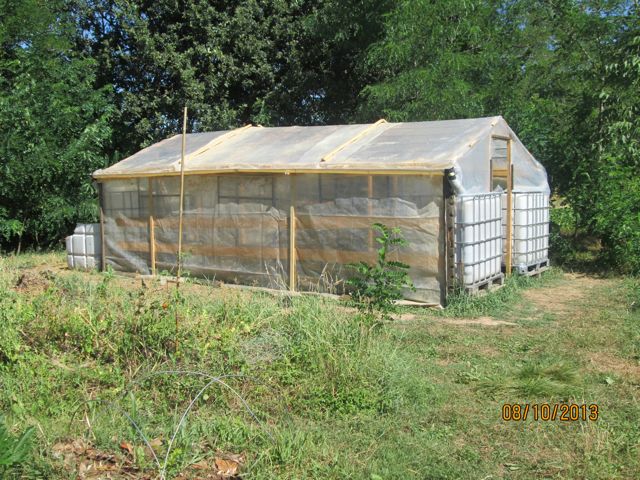 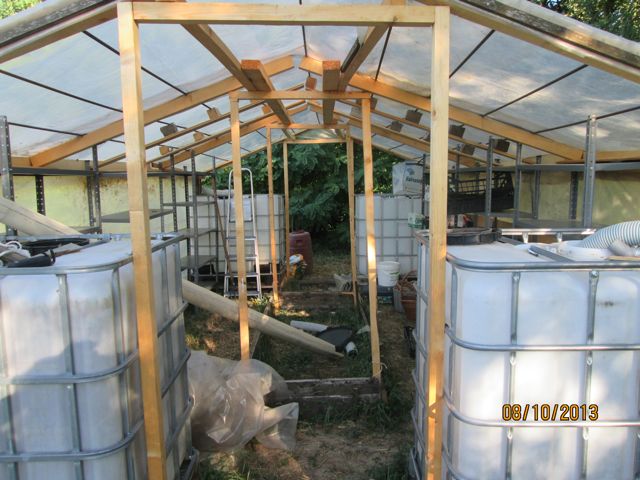 Use what you have!

On my greenhouse I am slowly replacing the plastic with used windows. I hate dealing with sun rotted plastic so I can't wait till I don't need to use it anymore.

Dale Hodgins
Posts: 9002
Location: Victoria British Columbia-Canada
671
posted 7 years ago
Are the water tanks just for collecting seasonal rain, or will there be an aquaponic component to your setup?

The wood looks like spruce or pine. What is it and how will it be preserved from rot?

Will it be used all year, and if so how will you deal with summer heat?

Am I correct in assuming that the water tanks are secondhand from the wine industry? I think Italy produces wine, yes, I'm sure I heard that somewhere.

Posts: 1047
Location: Northern Italy
23
posted 7 years ago
@Dale
Just seasonal rain. An acquaculture element could be easily added by linking the four tanks. I seriously thought about it, but as I'm constantly emptying the tanks, maybe not such a good idea for now.

Wood is most likely spruce. Don't think it was treated. Haven't thought about weatherproofing it. What would you suggest?

Summer heat could be mitigated by planting things in front. The back side is pretty shaded. We had it up when and hot this summer and it wasn't too bad. I plan to plant grapes on the tanks and maybe some cucumbers and peas up the main sunny wall using metal mesh.

The tanks are not from the wine industry, which is a good idea. Our area is not a wine-producing area, although it was at one time. The two tanks on the right were regenerated by a company and cost 60 euros a piece. The other two should have cost 50 a piece, but through a strange turn of events with the Tank Mafia that exists around these things that are required to be disposed of, we got it for free. Anyway, they definately come from a cosmetics company. Although we washed the thing like hell, I think it still has soap/chem products in it. We're currently not using the water on vegetables until we are more sure they are clean. Planning on flushing it out this winter and adding some nitrogen to build up algae in the hopes of digesting that nastiness. Should have had them cleaned professionally! The compost bins were scavenged at the town dump, and they weren't good enough to put water in, so the got cut up for bins.

Thanks for the ideas!
William

Cris Bessette wrote:I hate dealing with sun rotted plastic so I can't wait till I don't need to use it anymore.

They told us this greenhouse plastic usually lasts 4-5 years. Might have a different solution by then.
-W

Cris Bessette wrote:I hate dealing with sun rotted plastic so I can't wait till I don't need to use it anymore.

They told us this greenhouse plastic usually lasts 4-5 years. Might have a different solution by then.
-W


I've been slowly framing in parts of my greenhouse and installing used windows. I have been saving glass bottles for a year or so and am planning
on doing part of the walls as bottle / cement walls.

It has 12 spaces for growing. It's 50 cm off the ground. It's 2 meters long. It's currently growing microgreens. We've also added "the mini-dome under the dome" to keep the seedlings extra warm this winter.

Will probably have to add more soil to the box, since it's likely to settle a bit.

We're planning on using this for upping our microgreen production and for creating the seedling stock of lettuces and other plants for the garden. 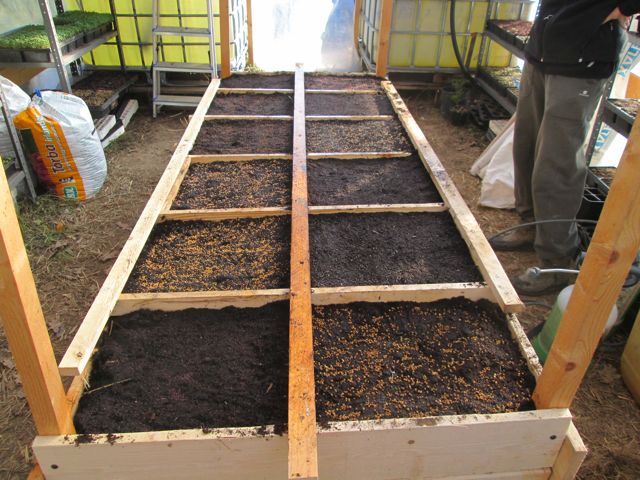 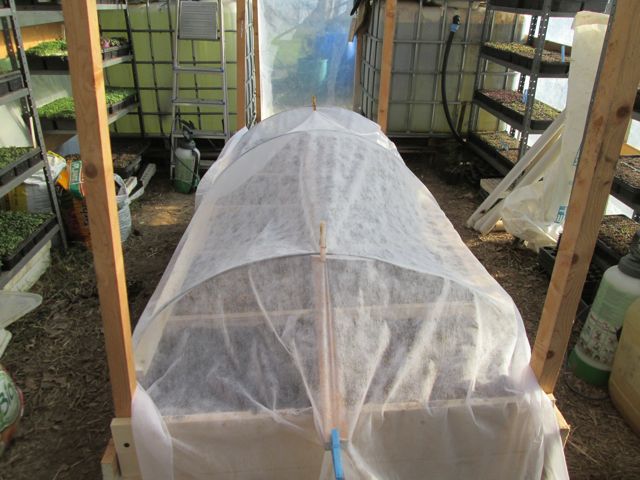 posted 5 years ago
Love it, how is it holding up?

In the summer the top needed to be covered with green shade cloth and the plastic sides needed to be pulled up, not too difficult if i had constructed it with that in mind.

William Bronson wrote:Love it, how is it holding up?

We dismantled everything and moved to another piece of land where we had an iron frame set up.

A final pic of tomatoes and tomatillos I grew inside.

and pics of the dismantling:
IMG_3371.JPG 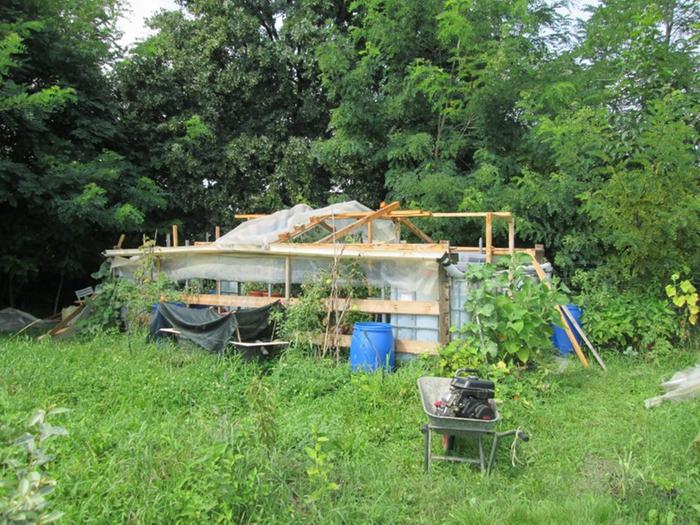 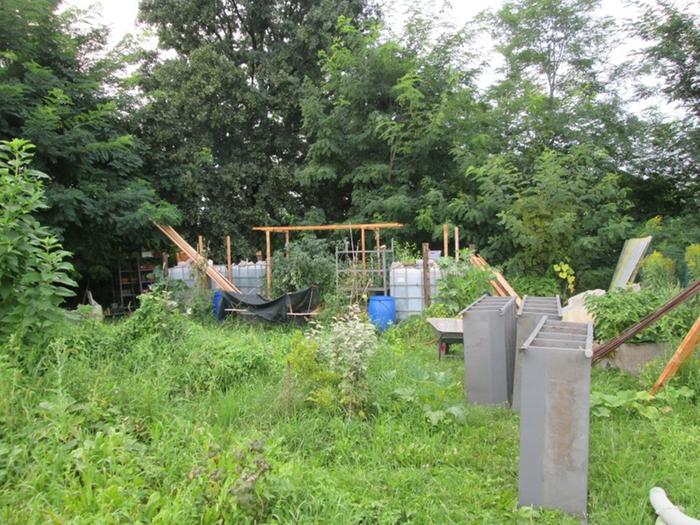 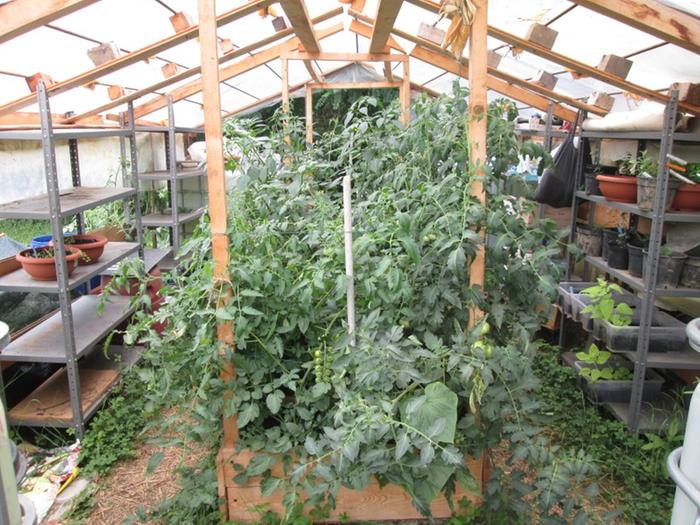 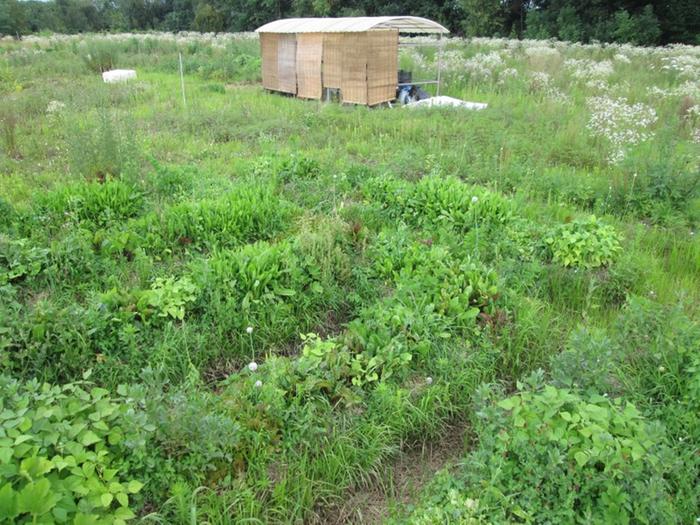 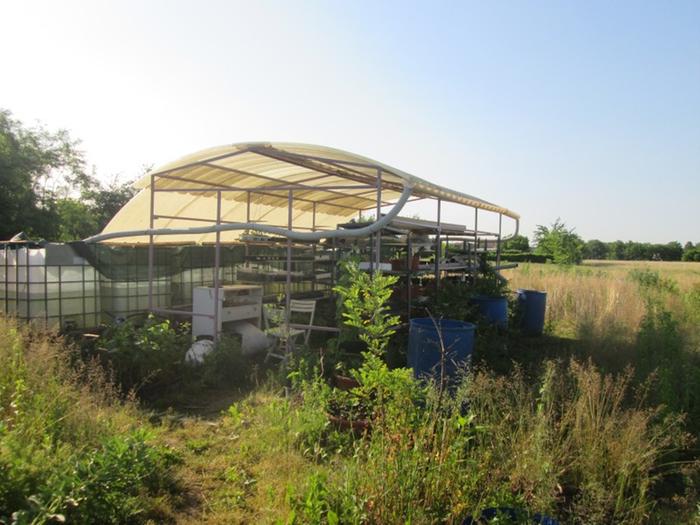 posted 5 years ago
Very nice. I have been pondering a whole wall of a greenhouse made of double stacked totes. The non potable ones are only $20 american, painted black , filled with water,and insulated on the cold side,they could be one hell of a thermal mass. Plenty strong too( they are designed to be stacked 3 high, full.
Thanks for the update!