Pack McKibben
Posts: 60
Location: Southern USA
posted 7 years ago
I like the idea of having a drum that's easy to change out, clean out, and inspect. This being my first RMH. I like Erica and Ernie's way of joining two drums so they can be taken apart easily.
Q1: How much of the short drum is below the bench?
Q2: How did you cut the drum?
Q3: Joining two drums together, using the drum clamp technique, is there any worry of carbon monoxide leak?
Q4: Is there a fireplace gasket between the two drums?
thanks for any help with this.....
EnE-RMH2drums.jpg 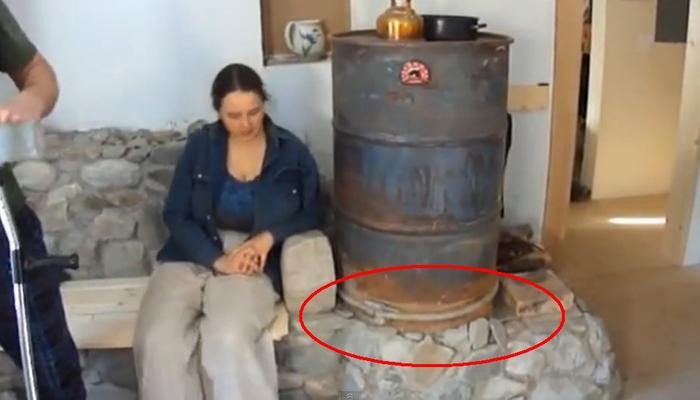 posted 7 years ago
Pack McKibben : About a year ago last September My wife and I were lucky enough to assist Ernie and Erica Wisner with this style build here in the Adirondacks at a Workshop
over a long weekend ! Lets See how much help We can be !

Almost exactly half stopping just before the reinforcing ring ! All the fire brick that was cut to size, and the barrel were cut with 1 each masonry and metal grinding disk on a
small cut off grinder, I am guessing 4'', maybe 5''?

The union of the two barrels was made with the edges/lips of the single clamping band widened slightly by Ernie's skillful and rapid tapping with a hammer, that entire section
with the clamping bland was put together with a rope type gasket that had the center core pulled out of it! and formed as a double-walled ribbon gasket, and on our work site
it was totally buried in cob, doubly sealing the joining of the two barrels and hopefully sealing in the CO ! A similar rope to double walled ribbon gasket was used at the top
cover !

Though only a few pictures were taken at the time of construction, There is a video of the proud owner and her RMH !

In case others are interested at the top of this thread where it says permies>>forums>>energy>>rocket stoves click on the rocket stoves and you will be sent to a list
of all recent and past Rocket Stove Forum/Threads . . .

Search for and click on . . . ' video : great rocket mass heaters in upstate N.Y. and Quebec ' it is the first video that you want to see made by a fellow member here at permies
about 3-5 months after the build ! (I think he did a good job!)

After you watch the film come back here with any questions ! For The Craft ! Big AL !